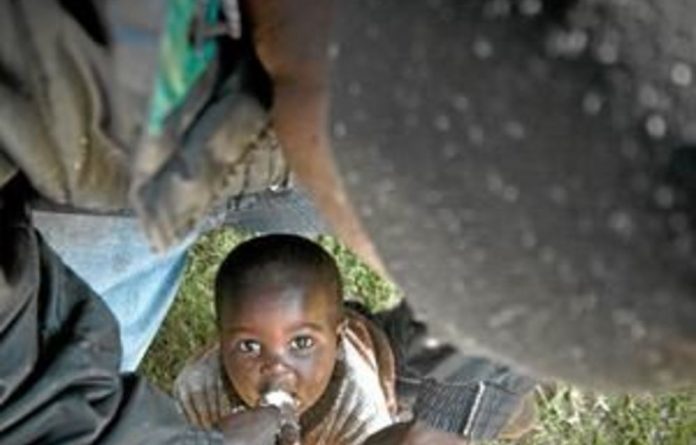 Food prices, which increased by just 1% last year, have increased by a whopping 10.6% so far this year. Lower-income South Africans, who spend much more of their total earnings on food, are the biggest victims of this sharp increase in food-price inflation.

Anecdotal evidence from travellers overseas is that a trolley of food in a British supermarket is often less expensive than in South Africa. But, Professor Johan Willemse, agricultural economist at Free State University, said until this year South African food inflation was below the United Nations’s Food and Agricultural Organisation’s food index.

According to the South African quarterly “Food Price Monitor” report, produced by the National Agricultural Marketing Council, the cost of the standard Statistics South Africa food basket, expressed as a share of the average monthly income of the wealthiest 30% of the population, is only 2.9%. By contrast, this cost for the poorest 30% of the population was a heavy 36.4% in October. And, because of recent high food-price inflation, particularly in commodity foods, it has increased from 32.4% in October last year.

Admittedly, this standard food basket — which aims to represent an index or average South African food “shop” — is of basic commodity-related items. It consists of a 700g loaf of white bread, a 700g loaf of brown bread, 5kg of super maize meal, 5kg of special maize meal, 2kg of rice, a 410g can of butter beans, 1kg each of onions, cabbage, potatoes, tomatoes, apples, bananas and oranges, a whole fresh chicken, stewing beef, one litre of long-life full-cream milk, 18 extra-large eggs, 750ml of sunflower oil, a 500g brick of margarine, 400g of peanut butter, 750g of instant coffee, 62.5g of tagless teabags and canned tuna (which replaced canned pilchards because of “data limitations”).

One might think that the basket reflects a relatively healthy diet among the poor, but the five most widely consumed food items by poor South Africans are maize porridge, brown bread, sugar, tea and full-cream milk.

There was a big spike in international food prices a few years ago, but South Africa was shielded from it by the strong rand. Now the rand is declining and food prices, which are highly commodity-based, are climbing. The effect is particularly cruel because unemployment is at an all-time high.

Professor Johann Kirsten of the University of Pretoria said the spike was caused by higher administered prices (electricity) and regulated prices (fuel), combined with decreasing supplies of maize because of a relatively small crop this year. This has pushed up maize prices to close to import parity levels.

Food inflation is always likely to spike in South Africa when food commodity prices move from export to import parity levels. Export parity prices normally happen when farmers produce more than enough for domestic requirements and can export, which is now limited by rail and port capacities. Import parity prices happen when imports are needed to satisfy local demand.

The South African maize crop in 2010 was 12.8-million tonnes, but it has fallen to 10.4-million tonnes. The latter figure would have been enough for local requirements if there had not been exports.

The big effect of the swing towards import parity prices and the weaker rand is reflected by the gap between international and local inflation in yellow maize prices. International prices increased by 14.9% in the year to end-October; the domestic price of yellow maize increased by 57.65%. In the same period the domestic price for white maize (for human consumption) increased by a massive 73.57%. Urban consumers paid 30.86% more for 5kg of maize meal in October this year than last year.

South Africa has not been self-sufficient in wheat for many years and every year it imports the grain, which means the local commodity prices are usually at import parity levels. In the year to end-October the international price of wheat decreased by 15.24%, but the domestic price increased by 9.28%, probably because of the weaker rand. A loaf of bread increased by about 12.8% in the same period.

Despite the relatively low actual weight contribution of bread in the “five foods” of the poor, bread costs significantly more than the maize-porridge component — about 70% more in October — and its price is therefore very important to them.

Another area of particularly high food commodity inflation is fats and oils. Sunflower seed prices decreased in South Africa by 11% in the year to end-October, but this decrease has not yet been reflected at the retail level. In fact, the price of sunflower cooking oil (750ml) increased by 19.12% and the price of a brick of sunflower margarine by 24%.

Kirsten said that international oil seed prices had been increasing because of the increased use of oil seed for biodiesel in Europe.

Meat also experienced high inflation recently and the price of beef and lamb increased by more than 33% in the year to end-October. But here the causes are related to a lack of government support and rising input prices. “The short supply of red meat, beef and mutton is a direct result of disease during the past season … The red-meat industry is upset about the lack of veterinary services by the government and the increase in diseases, which has reduced reproduction rates. Theft and vermin are other major causes of losses of about R1-billion a year to farmers. And with land expropriation without market-related compensation on the cards, investments are decreasing, reducing production,” Kirsten said.

Chicken remained the budget-conscious person’s favourite meat. During the year the producer price of fresh chicken per kilogram decreased by 5.4%, but the retail price increase was between 3.22% and 5.65%. The muted inflation was probably owed to cheap imports. However, prices may rise ahead of red meat over the festive period.

Retailers’ erratic increases
The latest “Food Price Monitor” report indicates that poor people are quite right to shop around for better prices. Even for the cheapest items there were big variations in prices between the five retailers surveyed.

This indicates that South African retailers increase their prices opportunistically and erratically. Walmart’s strategy, “low prices every day”, is opposite to that, so as its role in the food retailing industry grows it might have a significant inflation-fighting effect.