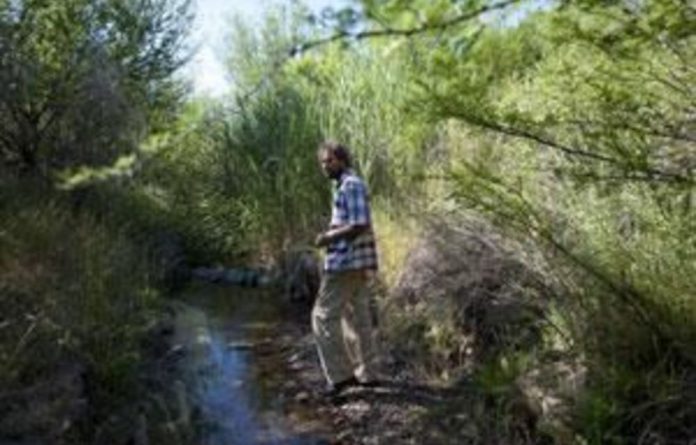 When Peter McIntosh
visited his local computer shop recently to do some urgent copying he was told in the starkest possible South African terms: “God sê nee! [God says no!]” “Fortunately, God said yes further down the street,” McIntosh
said good-humouredly, sipping at a mug of rainwater.

It turns out the prejudice applies more broadly to the people with whom McIntosh
has chosen to live and perhaps more fundamentally to the way these people have ­chosen to live on Berg-en-Dal farm on the outskirts of Ladismith in the Little Karoo. “It’s better than it was — at first there were all kinds of rumours: that we were drug dealers, that we ran around in the nude. The terms permaculture and permaculturalist weren’t exactly part of the local vernacular then,” said McIntosh
.

They still are not, but nowadays there are a lot more folk in town who know the Berg-en-Dal people are serious about what they do, even if it is not entirely clear what that is. Legally speaking, and in the vernacular of their website, McIntosh
and the other residents are members of a section 21 non-governmental organisation called the Klein Karoo Sustainable Drylands Permaculture Project, which focuses on training and supporting the development of permaculture systems, with the farm itself as the exemplary model.

Less formally, Berg-en-Dal is a Thoreau-like experiment in getting away from it all, translocated a century and a half ago from Walden Pond to a hot, overgrazed, snake-intensive valley near the tip of Africa. Thoreau only went out to the woods for two years, however, and he went alone.

Berg-en-Dal’s longest-serving members, at least a handful of them at any one time, have been out on the farm since 1999. Starting out was not easy, and not just for environmental reasons. “Some of the original members were artists and some were permaculturalists and it took time to work out who was in this all the way and who wanted to just stare at the fynbos. In the end it was the permaculturalists who stayed,” said McIntosh
, who explained that he joined to “get away from the world”, but soon found himself locked into the most socially intense experience of his life.

“A community mirrors your strengths and weaknesses. Over the years ours has matured and although things still bubble over all the time, we’ve learnt you never walk away from an issue, you never slam a door in someone’s face.” Underpinning the harmony is a detailed constitution, worked out over more than a decade.

“Many attempts to found communities fail because they don’t have their rules at the centre of what they do. They’re good at extending procedure to others, but not so good at observing procedures of their own,” said Marliese Maritz, who runs the office and teaches gardening to children in the nearby missionary town of Zoar.

When the community was founded many of the locals, especially the commercial fruit farmers, forecast certain failure. “Die hippies-blommekinders” had bought themselves a basket case — a degraded valley insufficiently fed by a slimy stream. But then, as founding member Tahir Cooper said, adversity was sort of the point.

“Making things work in such marginal conditions beats the hell out of doing a PowerPoint presentations, as far as demonstrating the effectiveness of permaculture is concerned,” said Cooper.

The organisers of the COP17 conference in Durban, to digress briefly, would have done well to recognise this. Instead, Durban was turned into something of an environmental Potemkin village for the duration of the conference, complete with futuristic Zulu beehive huts, which moved at least one Texan blogger to screech that the inmates were undoubtedly in control of the asylum.

South Africa does not boast many “sustainable ecological human settlement models”, as Cooper calls them, in large part because there is no legal framework in South Africa to support the creation of ecovillages.

“South Africans come from a communal model and that’s what we’ve got to go back to, but the regulatory system is really archaic. We’ve learned, for example, how skewed the allocation of water is in the favour of commercial white farmers. Visit poor communities nearby, like Zoar and Amalienstein, and you will find coloured farmers doing nothing because the white farmers upstream have taken all the water,” said Cooper, who believes that rural regeneration in South Africa — reversing the flow of potential farmers to cities — depends on the properly managed restitution of land and resources, putting people with the requisite skills on one- and two-hectare parcels of land.

Views like these put Cooper and the other members at odds with many in the region, and yet he insists that “farmers themselves will tell you that agriculture has become a destructive industrial process, the most environmentally destructive practice in the history of humankind, in fact, and that they no longer feel like farmers but like manufacturers.”

He said the Little Karoo, which is semi-arid and covered in herbaceous plants, used to be grassland but that it was overgrazed in the 1800s. “It’s a brittle environment that was managed as a wet environment and the result is the degradation you see all around you. “What we’re doing at Berg-en-Dal is trying to shift the ­environment from brittle to non-brittle using permacultural practices,” said Cooper.

Berg-en-Dal has not yet achieved food self-sufficiency but flourishing gardens around the members’ houses suggest the goal is not far off. The members operate on the principle that a structure, animal or plant should demonstrate three useful linkages for its existence to be justified. An acacia outside Maritz’s house, for example, screens the kitchen from view and keeps out the setting sun. It fixes nitrogen in the soil and provides shade for a small garden underneath.

Vaalie, the farm donkey, “our one-donkey holistic management system”, manures soil but also breaks it up so that grass seeds can penetrate, and could pull a cart if the members ever get around to buying one. The most important linkages, however, are those that exist between the farm’s members. To fit in and pull weight, each member needs to find a niche and develop a skill that benefits the development of the farm.

Cooper, for example, has become one of the country’s leading permaculture consultants, and with other members runs courses on and off the farm. McIntosh
saw a need for natural building expertise and the rammed earth and straw-bale houses that dot the valley all owe something to his experience.

McIntosh
‘s own home — the term “homestead” is preferred and members are not homeowners but “land custodians” — is geo-thermally cooled. His state-of the-art water heating system cost him two bags of lime. He said sustainability is not just about what you do, but also about how you make your money.

“I would be ashamed if I charged for more than a third of the work I do. Often we have no money at all, but all that happens then is I eat better.” These are difficult choices for many to accept. Most of the people who do their courses are professional and, although some make a shift to a more sustainable lifestyle, McIntosh
said the professionals to whom he teaches natural building techniques “hardly ever build houses of their own”.

Cooper agrees that communities like Berg-en-Dal are unlikely to precipitate a fundamental shift in the way people live, “unless government sincerely commits itself to cleaning up the regulatory environment and the economic environment”.

“Shifting from one system to another involves a changeover period that is not necessarily going to be ­productive, and when that happens you have to support the sector ­making that shift. If it’s agriculture you’re trying to shift, don’t put pressure on the adapting farmer by ­making him pay taxes. The South African government talks endlessly about climate change adaptation at international forums like Durban’s COP17, but here at home in terms of the ­regulatory environment there is very little ­movement. We need to wake up,” said Cooper.

In the meantime, the members of Berg-en-Dal will continue developing their farm according to the 12 principles of permaculture, secure in the knowledge that even if the path they have chosen is not to the taste of all their neighbours, they are among the doers rather than the talkers — and not half as barmy as some might think.

“We’re not complete anarchists and we’re not tree-hugging whatevers, nor do we do this because we think it is cool. We do it because these are critical issues and too few people are demonstrating alternatives,” said McIntosh.