When times get tough, adapt 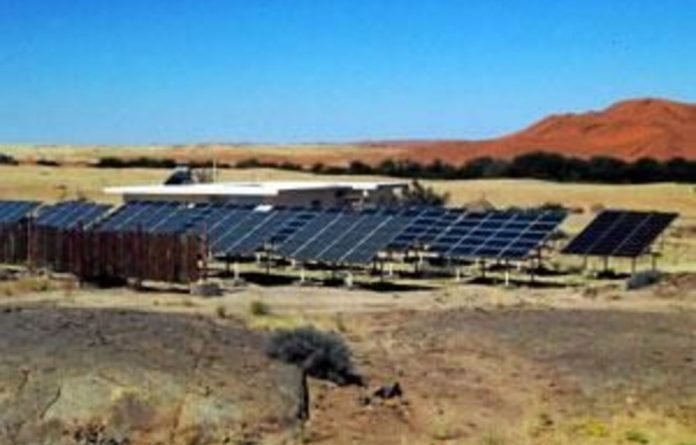 It is morning in the shifting sands of the Namib Desert, and the little laceritid lizard, Meroles anchietae, is out looking for his breakfast of seeds and insects.

This reptile is perfectly adapted to the scorching days of one of the world’s most variable ecosystems. Dancing like a child on a hot beach, this lizard, found nowhere else in the world, cools its alternate feet in the wind allowing for a few more minutes of foraging and breeding before it is forced to dive under the sand and escape the midday sun.

Miya Kabajani, a young Namibian researcher working on the long-term monitoring programme at the Gobabeb Training and Research Centre, studies how animals and plants have adapted to this variable climate and what lessons they may teach us about how we can adapt to climate change. “What we can learn from these animals and their adaptation is that if things get hard for you, you just have to learn to live with it. It’s all about adaptation.”

Established in 1962, the Gobabeb centre sits at the edge of the Namib dune sea on the banks of the Kuiseb River. Dr Mary Seely is a member of the station’s management committee who has been working here since 1967. She is out in the dunes today with Kabajani and scientist Christine Grummon from the United States, who are taking air samples.

The Gobabeb centre is a joint venture between the ministry of environment and tourism in Namibia and a non-governmental organisation, the Namibian Desert Research Foundation. Local Topnaar communities, Namibian scientists and researchers from around the globe come here to gather data and learn about how to live sustainably with the environment.

Kabajani and Grummon stand in the shifting sand next to two small, blue, numbered tanks collecting climate data for NOAA, the United States National Oceanic and Atmospheric Administration. “It has monitoring sites all over the world and the Namib Desert and Gobabeb Research Centre specifically is a site where air sampling is done for carbon dioxide and greenhouse-gas monitoring,” said Kabajani.

“The air sample from this high pole is stored in these bottles and sent back to NOAA in Colorado for analysis. Its data set agrees that global greenhouse-gas levels are rising steadily.” This air-sample data is used by scientists like Francois Engelbrecht of South Africa’s Centre for Scientific and Industrial Research and others around the world to track and model the effects of rising greenhouse-gas emissions.

Engelbrecht helps put the problem into perspective. “What we have seen in the past century is a temperature increase of about 1˚C globally. Now what is natural for the planet? When the planet moves from an ice age into a warmer phase, temperature tends to increase by 1% every 1 000 years, or perhaps 2 000 years. So what we are looking at here is an increase in global temperature that is happening at a rate almost 10 times faster than any ­natural process.”

To understand the future of the Southern African climate, Engelbrecht runs a regional climate model using the biggest computers in Africa at the Centre for High Performance Computing. The evidence suggests that Southern Africa will experience double the average global rise in temperature because of its regional air-circulation system.

Sitting in front of his climate model as it flips through the coming decades of higher temperature, Engelbrecht said: “It is realistic to think that emissions will keep on growing for decades to come in spite of our best intentions. Yet, even if the world is successful at restraining the global rise in temperature to 2˚C, it still means a 4˚ rise in temperature for the Southern African region.”

This type of dramatic change has huge food security implications for Southern Africa.
Higher regional temperatures mean growing seasons are shifting and rains are becoming more unpredictable. In this way the regional climate is becoming more like the Namib Desert.

At Gobabeb the climate is so variable, in some years, it does not rain at all, in other years like this one, the Kuiseb River flowed for months. Gobabeb is not just researching climate change, but also teaching people how to adapt to variability.

Sitting on the top of the dunes looking at this striking landscape, Seely said she was concerned about this rising variability. “It’s natural in the Namib desert and we are interested in seeing how that plays out in natural adaptations, but when we look to human aspects and natural variability, how is that going to go forward? Well, one of the important things is that we have to look towards planning.”

Seely believes farmers can adapt at a local level, just like the laceritid lizard. Adaptation empowers local people to take ownership of the changes affecting them and get information that helps them to adapt to a changing climate.

Zebedeus Swartbooi is a local from the Topnaar community, who lives just down the Kuiseb River in a small collection of farm houses. “It’s a good thing to have the centre in the community because it has helped us in many ways with workshops and also with projects that help us live sustainably in the environment we are living in,” said Seely.

Gobabeb gives the world a chance to adapt to climate change using a potent mixture of scientific research and developmental ideas that are vital to the survival of our global village, but like the dance of the lacertid lizard, humanity will have to adjust quickly.

Creating a climate for change