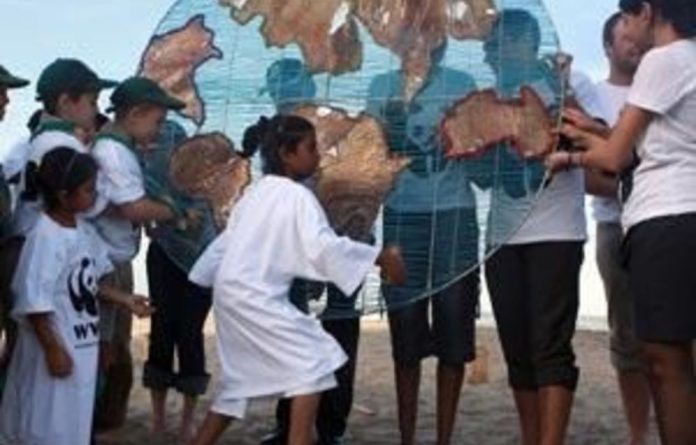 A marathon UN climate conference on Sunday approved a roadmap towards an accord that for the first time will bring all major emitters of greenhouse gases under a single legal roof.

As negotiations entered the 11th hour at COP17, climate change activists chanted slogans through the corridors of the ICC, demanding action and commitment from negotiators. Those who saw out the peaceful protest were escorted out by UN security.

If approved as scheduled in 2015, the pact will be operational from 2020 and become the prime weapon in the fight against climate change.

The deal was reached after nearly 14 days of talks under the UN Framework Convention on Climate Change (UNFCCC).

The world forum also launched a Green Climate Fund to help channel up to $100-billion a year in aid to poor, vulnerable countries by 2020, an initiative born under the 2009 Copenhagen Summit.

Approval came after two and a half days of round-the-clock wrangling among 194 nations.

Even by UNFCCC standards, the meeting broke the record for going into overtime.

‘It is done!’
The talks should have ended on Friday but wrapped up in the dawn light of Sunday amid scenes of exhaustion and shredded nerves.

And the often-stormy exchanges reflected concerns among many countries over the cost of making energy efficiencies and switching to clean renewable sources at a time of belt-tightening.

Citing the words of Nelson Mandela, she said on Twitter: “In honour of Mandela: It always seems impossible until it is done. And it is done!

“I think in the end it ended up quite well,” said US chief negotiator Todd Stern.

“The first time you will see developing countries agreeing, essentially, to be bound by a legal agreement.”

Taking significant steps
European Climate Commissioner Connie Hedegaard said the deal marked the shift that had occurred over the last 20 years, when the world first set out to tackle climate change and tied only rich countries to carbon constraints.

“The Basic countries took some significant new steps in acknowledging that the world of the 21st century is not the same as the 20th century,” she said referring to the four big emerging economies — Brazil, South Africa, India and China.

In the runup to the conference, scientists pounded out loud warnings, saying future generations would pay the bill for foot-dragging.

Current measures to tackle carbon emissions are falling far short of the goal of limiting warming to two degrees Celsius.

According to research presented by German scientists, the world is on track for a 3.5-degree rise, spelling worsening droughts, floods, storms and rising sea levels for tens of millions of people.

The European Union (EU) led the charge in Durban, pushing for the roadmap in exchange for renewing its pledges to the Kyoto Protocol, a treaty deemed iconic by developing countries but increasingly dismissed by rich ones as out of date.

Kyoto’s first roster of legally-binding carbon curbs expires at the end of 2012.

The EU will sign up for fresh commitments taking effect from 2013, although this will be little more than symbolic, translating into the UN framework its existing plan for reducing European greenhouse-gas emissions by 20% by 2020 over 1990 levels.

So much to do, so little time
It could also be joined by New Zealand, Norway and Switzerland in a show of unity, say European diplomats. The duration of the post-2013 commitments will be either five or eight years; negotiations on this will take place next year.

The EU made the pledge to help assemble a coalition of developing and small island states — together accounting for nearly two-thirds of the world’s nations — that lobbied China, the United States and India to support the quest.

China and India have become huge emitters of carbon over the last half-dozen years but do not have Kyoto constraints as they are developing countries.

The United States, the world’s number two source of man-made carbon, also has no legal curbs as it refused in 2001 to ratify Kyoto.

The key to the Durban deal lay in overcoming the opposition of the Big Three by crafting vague text about what the pact will be — essentially reassuring them that the price will not be unaffordable.

Observers say the talks for the 2015 pact will be arduous.

The thorny issues include determining the agreement’s exact legal status and apportioning carbon constraints among rich and poor countries.

“A heavy load of work ahead on the post 2020 arrangement needs to be done,” China said in a statement, eyeing next year’s UNFCCC conference in the Gulf state of Qatar.

“The lack of political will is the main element that hinders cooperation on addressing climate change in the international community. We expect political sincerity from developed countries next year.” — AFP