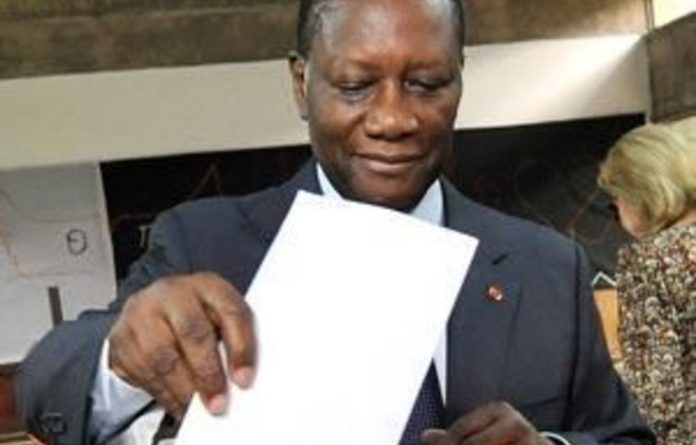 Côte d’Ivoire on Monday awaited results from its first parliamentary election for a decade, with officials saying a boycott by the opposition had done little to disrupt voting in the country recovering from a crippling civil war.

Election officials said they expected most of the results from Sunday’s vote would be known by Tuesday, with the outcome seen strengthening the hand of President Alassane Ouattara’s ruling coalition.

“Overall, the election took place peacefully in polling stations visited in the district of Abidjan and the interior [of the country],” the United Nations secretary-general’s special representative for Côte d’Ivoire, Bert Koenders, said in a statement.

The election was boycotted by the party of former president Laurent Gbagbo, who is in The Hague facing war crimes charges, over allegations of unfair treatment of his supporters.

Despite some incidents, election officials and observers said voting proceeded normally, although turnout was lower than the more than 70% recorded during the presidential election last year that sparked clashes between Gbagbo and Ouattara partisans.

Important step towards recovery
More than five million people were eligible to vote for Parliament in an election seen as a crucial step toward recovery after a decade of conflict and political turmoil in the world’s top cocoa-growing country.

Nearly 1 000 candidates are vying for the National Assembly’s 255 seats, according to the electoral commission.

“In most polling stations in our school, participation rate was at between 35% and 40%, no higher,” said Siriki Traore, head of a polling station in Yopougon, a pro-Gbagbo stronghold in the commercial capital Abidjan.

Only about a third of eligible voters cast ballots during the last parliamentary election in 2000.

Ouattara wants to rebuild institutions
Ouattara, whose supporters invaded the capital and captured Gbagbo after he refused to accept Ouattara’s victory in the presidential poll, urged Ivorians to vote, saying Parliament had an essential role in rebuilding the country.

“Côte d’Ivoire is at work and we need to build the institutions that will now be strong and independent institutions. I am applying myself to this task and that’s why the December 11 vote is an essential vote for all Ivorians,” Ouattara said after casting his ballot in Abidjan.

“We are going to continue the electoral process in March or April 2012 with municipal and regional election,” he said.

Ouattara’s ruling coalition, which includes his RDR party and the allied PDCI, appears set for a landslide win based on voting patterns during the first round of last year’s presidential polls.

The poll could boost investor confidence in Côte d’Ivoire, which wants to expand its gold mining, oil, cotton and services sectors to take back its place as the West African region’s economic powerhouse.

Peaceful progress
State radio said the election was peaceful across the country with no major incidents reported.

In Bonon, however, a locality in the centre of the country near Daloa which produces about a quarter of Côte d’Ivoire’s cocoa, local authorities said a vehicle ferrying ballot boxes, voter rolls and ballots, was hijacked by armed men.

Pockets of lingering tension and violence, particularly in the west, had raised concerns of trouble during the polls, which were secured by local and about 7 000 UN forces.

Côte d’Ivoire defence minister said the government had taken measures to ensure security during the vote with police, gendarmes and army deployed across the country. — Reuters