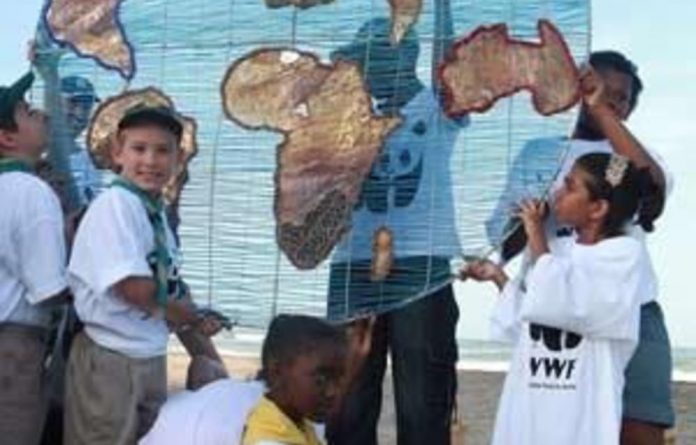 COP17 has come and gone, leaving many South Africans still scratching their heads about what it all meant. You have questions, we have answers.

Hold on a second. What exactly is a COP anyway? I wasn't paying attention back when all this started.
That's not surprising, given that it started an awfully long time ago — almost 20 years ago to be precise. That was when 194 countries signed up to a treaty to work together to limit global warming and dangerous climate change. That framework — the United Nations Framework Convention on Climate Change or UNFCCC — encouraged countries to cut their carbon emissions. The "COP" refers to the annual meetings of those parties and South Africa just hosted the most recent one. It was an epic negotiation process and ran over by a day and a half.

So we just hosted another annual climate disagreement.
To a certain extent that's true. The UNFCCC process is a multilateral one, which means everyone has to agree before they make a decision. But you try getting every country in the world — from the tiny island state of Kiribas to the industrial behemoth of the United States — to come to an agreement that will shape their society and, in some ways, constrain their development for decades to come.

That's rough. Have these countries ever actually agreed to anything?
Actually they have, and you might be familiar with the fruits of their labour — the Kyoto Protocol. The KP placed a legal obligation on developed countries to cut their emissions. Developing countries were under no obligation to cut their emissions. Firstly because they aren't responsible for the majority of the carbon that's been collecting in our atmosphere, and secondly because their focus was more on dragging their large, poor populations out of poverty.

Granted, the KP hasn't worked out so well. The US never ratified the protocol and some countries, like Russia and Japan, didn't do enough to lower their emissions and simply balanced the books by buying carbon credits off developing countries. Canada — who in climate circles is something of a pariah these last few years — announced on Tuesday that, after years of inaction, it was withdrawing from the KP to avoid being hit with a multimillion-dollar fine.

The KP may not be perfect but it is still the only deal the world has and it lays down some important foundations for tracking and reporting on emissions, and also put in place a system for carbon trading.

The first commitment period of the KP ran from 2008 to 2012 and one of the big issues at this year's COP was trying to get countries to commit to a second round of the KP. We got it but it was something as a hollow victory as none of the world's major emitters are bound by the protocol.

We must have really messed up if the conference ran over by a day and a half.
Not really. A number of COPs have run over time. COP16 in Cancun ended the morning after it was due to end and COP15 in Copenhagen ended after midnight.

There's been some grumbling about how long this year's COP went on but that was probably driven by the bleary-eyed negotiators, who managed to snatch only a few hours of sleep in the last three days of the process.

The South African negotiating team has defended COP17's lengthy final act and water and environment minister Edna Molewa has said that given the complex political issues that had to be dealt with at this COP — agreeing a second commitment period for the Kyoto Protocol, beginning a new deal, strengthening agreements on mitigation (read: emissions cuts) and finalising all the agreements made last year in Cancun — it was unsurprising that the COP took so long to wrap up.

You're joking. What was all the fuss about then?
Let's go back to that part where we've never actually had an agreement in which every country agreed to be legally bound to reduce their emissions. This time round the very term "legally binding", which seems so innocuous, was the source of much of the wrangling at the COP.

The negotiations are so politically charged, and the decisions so legal in character, that wording becomes crucial to the debate. The Durban Platform gave us leave to negotiate towards a "legal instrument, protocol or agreed outcome with legal force". In between all that legalese is room for either a strong deal ("protocol") or a weak one ("agreed outcome with legal force").

The American delegation in particular, as well as the Indian delegation weren't keen to commit to a legally binding agreement before they could see the content of the deal. So getting them to agree to the platform at all was a victory of sorts. A breakdown in the negotiations would have called the entire multilateral process into questions and could have meant years more of unrestrained carbon intensive development.

So did we save the world or not?
That's like asking if the glass is half empty or half full. On the one hand all the parties have consented to being involved in a new deal that will apply equally to every country. But the agreement is still vague enough that countries could find the wiggle room to keep polluting at unacceptable levels. To be honest, it was a compromise deal and except for the people who ran the process, nobody's really pleased with it.

The science tells us that our emissions need to peak by 2020 and then rapidly decline if we want to have a decent chance of avoiding runaway climate change but it's possible the new deal may only become fully operational that year. As things stand the planet looks to be headed for a four-degree temperature rise, rather than the two-degree rise these negotiations are trying to keep us to. So it's still looking pretty grim.

Are you saying we can't save the planet?
Firstly, we're not trying to save the planet, we're trying to save people. The extreme weather we've been seeing around the world — like flooding in South Asia and famine in East Africa — is indicative of climate change and climatologists expect these to increase in frequency and severity as the years pass.

And to answer your questions, well, we'd have to do something pretty drastic to turn things around.

But it's not like we have to wait for a global deal in 2020 to take action. Domestic action can do a lot to change things. Some countries in the European Union are cutting their emissions by up to 40% in the next few years. Even China, the world's top carbon emitter, plans to cut its energy intensity over 40% in the next five years and is investing heavily in renewables.

Did nothing good come of the conference?
There were some small but important victories. Countries have started to make pledges towards a green climate fund, which could be ready to begin helping developing countries set up clean energy projects and programmes for adapting to extreme weather events, and a work programme has been set up to find ways to mobilise funding from innovative sources.

What happens next?
Contrary to what you may have heard over the past few weeks, this isn't exactly a game of deal or no deal. The countries will negotiate throughout 2012 to iron out the less tricky parts of their deal before the next big COP, which is being held in Qatar in November/December. And after decisions are made there, they'll just keep negotiating. If you thought getting the Durban Platform was difficult, wait until 2015 when the new climate deal, with all its political and economic ramifications, has to finally be adopted.

So next year all of this just continues?
Indeed.