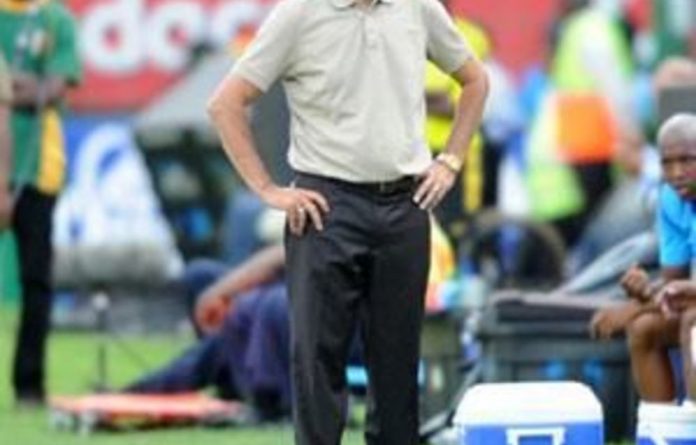 There’s a zealous faction of Mamelodi Sundowns fans with a taste for chasing foreign coaches out of town, but they may struggle to evict Johan Neeskens should his results falter. The hawk-eyed Dutchman, whose troops take on SuperSport United on Friday in a top-of-the-table Premier Soccer League clash at Lucas Moripe Stadium, is one of the most tenacious characters in football
history.

As Johan Cruyff’s midfield minder for Ajax Amsterdam and Holland, he was nicknamed Kamikaze Pilot. At Barcelona, they called him El Toro (The Bull). He harassed Eusebio into anonymity. Neeskens was an unstoppable force on a pitch and took pride in completing tackles and contracts. “As a player, I always wanted to stay. And as a coach, the same,” he said this week at Chloorkop in Midrand.

Neeskens’s adversary is just as unflinching. Gavin Hunt has seen off a parade of foreign rivals during his four years at United. But, last term, he was floored by a Dutch double whammy, as Ruud Krol’s Orlando Pirates grabbed the prizes while Foppe de Haan’s Ajax Cape Town hoovered up the critical acclaim.

The evidence does suggest that Dutch coaches click better with local football culture than their Spanish, French or German counterparts. “I respect all the coaches in this league,” said Neeskens. “But it’s true that Dutch coaches try always to play attractive football. I grew up in that philosophy and if you have the right players to do it then you do it.”

He has one such player in Teko Modise. The Brazilian playmaker is recapturing his exuberant form of 2008 and credits Neeskens’s support for his comeback.

“From the beginning, I could see Teko had a lot of quality,” he said. “I don’t care about his issues with his old club. He has to play within my 4-3-3 system, of course, but I always give freedom to players of his quality. They have to know when and where to use that freedom. But Teko has an eye for the situation. He has fantastic technique and vision.”

‘You have to be in command’
But Neeskens is frank about the flaws he sees elsewhere in South African football, including a chronic impatience.

“You have to be in command,” he said. “Ping-pong football can seem attractive, but neither side has control. When winning 3-0, you must keep the ball and make the opponent take more risks. It’s a mental thing. It requires concentration. I don’t see enough control or accuracy in the PSL, even in my own team.”

In Downs’ last league outing against Kaizer Chiefs, they had 70% of possession but paid for their bluntness up front, losing 1-0 to a Thomas Sweswe header. Against SuperSport, who press and break expertly, their fluency will be subject to a tougher test.

“You can’t compare us to Barcelona but we have to try to improve the quality and speed of our passes,” said Neeskens. “If I have the ball, I must see three or four movements ahead of me, then make a decision. It could be a wrong decision but I need options. Often our attackers wait for the ball standing still and that’s so much easier to defend against.”

Neeskens can claim a role in the development of Barca’s brilliance, both as Cruyff’s adjutant in the mid-Seventies, when the seeds were planted, and as Rijkaard’s deputy between 2006 and 2008. He had ring-side seats for the Mourinho-Rijkaard feud, but didn’t savour the spectacle.

“Mourinho had a history with Barcelona and wanted to create an advantage and that’s the way he did it,” he said. “But Rijkaard didn’t let himself go. Sometimes you want to put a bit of fire on the oil, but sometimes it’s better to say nothing and get back to work. I’m the same as Rijkaard, I don’t need that stuff.

“Hiddink knew exactly how to handle stars. Rijkaard also knew how to talk to players and he was always very calm. But I don’t want to imitate either of them; I have to be myself, with my own qualities.”

‘Personified by Cruyff’
There’s an edge of insecurity about Neeskens. According to Niels Posthumus, a sportswriter for Dutch newspaper Trouw, he never received the adulation that his excellence as a player deserved.

“The thing with Neeskens is that he chose to be in the shadows, in football terms,” said Posthumus. “He went wherever Cruyff went. But Cruyff also really wanted him to follow him wherever he went, because Cruyff needed Neeskens [or a player like him], in the same way that Messi needs Xavi. Cruyff did not defend at all. He needed someone to do that for him and that man was Neeskens.”

“Mainly for this reason, Neeskens is not so revered in Holland. He re-presents the part of football that the Dutch prefer not to think about — hard defending. We like to think of our football as only attacking, personified by Cruyff: beautiful, fast and tactically very strong,” Posthumus said.

“But we actually had some real butchers in that Seventies Orange machine — Arie Haan, Neeskens and others. They made bad fouls, tackled hard, worked hard. But working hard is not a thing Dutch fans like to associate with their football.”

Neeskens was a goal-scoring kingpin in arguably the greatest losing World Cup side of all time — the Oranje generation of 1974 and 1978. At Barcelona in 1976, he was the first foreigner to win the Spanish player-of-the-season award. He was a masterful penalty-taker and, today, he reluctantly compares his game to that of Frank Lampard.

But, as a coach, Neeskens has stayed even deeper in the background than he did as a footballer. He is known merely as a solid disciple of the tactical prophets of his land. Neeskens’s last assignment as a club head coach was at NEC Nijmegen, a lean four-year stint that ended seven years ago.

A much-needed PSL title for Downs would mark his escape from the shadows.