The story of Christmas, with a modern twist 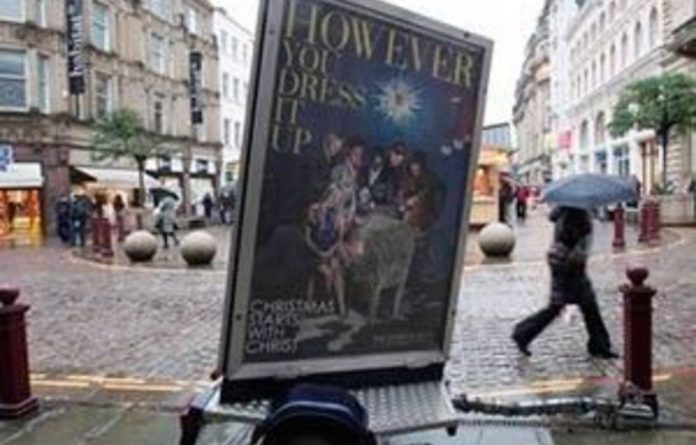 There’s a beautifully groomed Mary in a blue party dress, a fashionable Joseph gazing adoringly at the baby and wise men carrying a Faberge egg, a crystal bottle of perfume and a decorated skull.

With only 12 days to go until Christmas, a church group unveiled a poster on Thursday to remind people of the religious aspect of the holiday — while making a statement about modern-day extravagance.

The poster, deliberately designed to look like a fashion photograph, has the words: “However you dress it up, Christmas starts with Christ”.

Francis Goodwin, chairperson of multi-denominational religious group ChurchAds that organised the poster campaign, said the image is meant to remind people of the origins of Christmas.

“We are not killjoys, we do not object to giving presents and having a good time,” he said. “This is just a reminder that the real reason for Christmas is to celebrate the birth of Christ.”

“We wanted to update the Christmas message, to put a new image out there,” he said. “Most people outside the church think the nativity just means the traditional Victorian images we all recognise — it’s not something that is relevant to many people.”

The campaign is aimed at a country that has become, according to the European Social Survey, one of the least religious countries in Europe. A survey carried out in 2008 and 2009 found that slightly more than half of Britons had never attended a religious service — with only France and the Czech Republic having more secular populations.

But Christmas is still a hugely popular festival. Many shops put decorations up as early as October and families spend hundreds of pounds on presents for their children and friends. Even famed atheist Richard Dawkins has said he exchanges gifts and allows his daughter to have a Christmas tree despite being a passionate critic of religion.

In the poster, Mary and Joseph are an attractive couple in a mix of designer and high street clothes while the wise men look more wealthy than wise.

Poster campaign
The original shepherds may have walked across their fields to see the baby Jesus — here they are turned into trendy cyclists who might have ridden across city streets instead.

The wise men’s gifts are a new take on the traditional gifts of gold, frankincense and myrrh — the Faberge egg represents gold, the Swarovski crystal perfume bottle refers to frankincense and the diamond-encrusted skull by British artist Damien Hirst, like the more traditional Myrrh, symbolises death.

“In the middle of this financial crisis the poster does make you think what the value of all this stuff is,” said the Bishop of Croydon Nick Baines, who has supported the poster campaign.

“We live in a very superficial culture when appearance can be everything. The other part of the poster is to ask ourselves where do we fit into this story — does the nativity belong to us.”