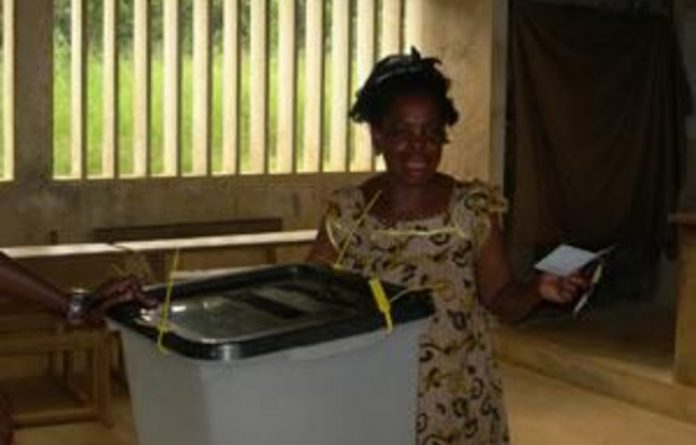 Gabon’s voters went to the polls on Saturday in legislative elections expected to hand an easy victory to President Ali Bongo’s ruling party.

For the first legislative polls since his father Omar died in 2009 after 41 years in power, Ali Bongo (52) has campaigned on his economic achievements and the hosting of the 2012 Africa Cup of Nations in the oil-rich west African state.

Gabon’s most prominent opposition figure, Andre Mba Obame, predicted that turnout would be at a record low after calling on voters to boycott the vote.

Bongo’s Gabonese Democratic Party and its allies hold 98 of the 120 seats in parliament and are not expected to lose much ground against a splintered opposition.

Inspired by the Arab Spring and a string of protest movements against long-standing rulers in sub-Saharan Africa, Gabon’s opposition once looked like mounting a serious challenge.

Record low turnout predicted
The west African country’s myriad opposition parties were adamant a few weeks ago that the election should not go ahead before the introduction of biometric polling material but their unity crumbled in the home stretch.

He said that while the opposition has chronically failed to organise, Bongo’s Gabonese Democratic Party (PDG) has carefully sabotaged any move that could challenge its almost absolute power.

“The PDG will never accept the idea of power-sharing. It is too accustomed to power”, Ndombet said.

A number of ruling party dissidents joined opposition ranks in recent years in a bid to push for more democracy but the PDG old guard that once protected Omar Bongo’s status as Africa’s longest-serving leader won the day.

Gabon’s most prominent opposition figure Andre Mba Obame, whose National Union party was dissolved in January after he proclaimed himself president, predicted that turnout would be at a record low.

Living under the poverty line
“The elections won’t be credible … I don’t see turnout topping 20%. It’ll be worthless, people won’t show up”, said Mba Obame, who is currently in France for treatment.

The PDG and its allies are not expected to lose much ground.

The Union of the Gabonese People, whose historical leader Pierre Mamboundou died in October, eventually decided to field candidates in Saturday’s polls after initially threatening to boycott.

A total of 746 000 people are registered to vote in Gabon, a country of 1.5-million inhabitants.

Despite the recent emergence of a middle class, disparities are huge with Libreville ranking among the world’s most expensive cities and more than half of the population living under the UN’s poverty line of two dollars a day.

Gabon is co-hosting next year’s African Cup of Nations with Equatorial Guinea and the event has spurred major investments in the region. — Sapa-AFP