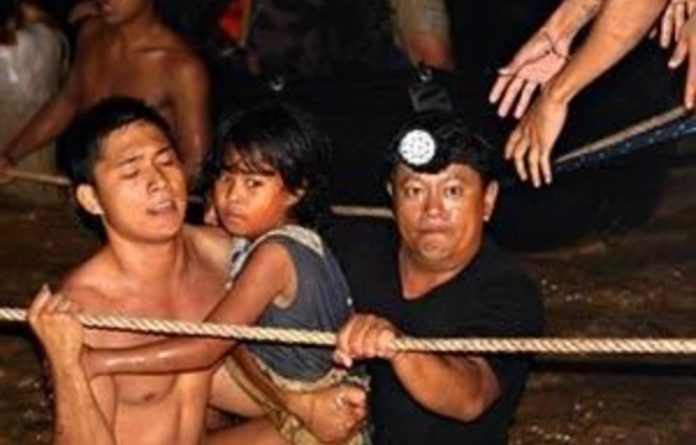 Pounding rain from a tropical storm swelled rivers and sent walls of water crushing into two southern Philippine cities in the thick of night, killing at least 436 people, many caught in their beds, officials said on Saturday.

Philippine Red Cross Secretary General Gwen Pang has said that the latest toll was based on a body count in funeral parlours.

The number of those missing was still unclear on Saturday night.

Separately, Lieutenant-Colonel Randolph Cabangbang said 15 people who had been swept to sea off Iligan had been rescued.

The storm is expected to slam into the western island of Palawan on Saturday night after crossing across the Sulu Sea with peak winds of 75km/h, the state weather service said.

Mayor Lawrence Cruz of Iligan said the coast guard and other rescuers were scouring the waters off his coastal city for survivors or bodies that may have been swept to the sea by a swollen river.

He said more than 12 hours of continuous rain over Iligan, as well as water from nearby mountains, had raised floodwaters waist-high in some neighbourhoods that do not usually experience flooding. Scores of residents escaped the flood by climbing onto the roofs of their homes, Cruz said.

Those missing include prominent radio broadcaster Enie Alsonado who was swept away while trying to save his neighbours, Cruz said.

Casualties likely to rise
Rufus Rodriguez of Cagayan de Oro said that about 20 000 residents of the city had been affected and that evacuees were packed in temporary shelters.

Television footage showed muddy water rushing in the streets, sweeping away all sorts of debris. Thick layers of mud coated streets where the waters had subsided. One car was shown to have been carried over a concrete fence.

The chief of the national disaster rescue agency, Benito Ramos, said that officials were still getting reports from the field and that the number of casualties would likely rise.

The floods were triggered by Washi, which dumped heavy rain over the Mindanao region overnight.

“Massive flooding had been reported over the region, especially in Iligan city and Cagayan de Oro city,” Ramos said, adding that tens of thousands of people sought shelter on high ground.

Strong winds
Strong winds toppled trees onto the rain-saturated ground in Polanco township in Zamboanga del Norte province, where three people drowned, including an 80-year-old woman who had been trapped in the first floor of her flooded home, said provincial disaster officer Dennis Tenorio.

Washi, the 19th storm to hit the Philippines this year, came ashore in eastern Mindanao and blanketed the region with thick rain clouds 400km in diameter.

It quickly cut across the region overnight and was over the Sulu Sea by midmorning Saturday, packing maximum winds of 75km/h and gusts of up to 90km/h. It is expected to blow out of the country late on Sunday, forecaster Raymond Ordinario said.