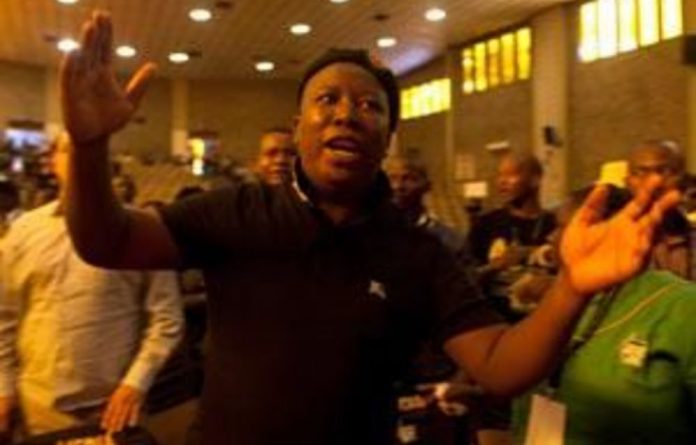 The embattled ANC Youth League president Julius Malema has been given another lifeline in politics after Limpopo province nominated him to serve on the ANC’s powerful provincial working committee.

Malema and his cohorts were suspended two months ago by the ANC’s national disciplinary committee (NDC), chaired by Derek Hanekom, for sowing division and bringing the ANC into disrepute.

Addressing journalists on the sidelines of the third day of the provincial conference on Monday, Soviet Lekganyane, the newly elected provincial secretary, said that Malema had every right to occupy leadership positions in the ANC because he was not suspended yet, and remained a member of the party.

Lekganyane added that these were internal democracy processes, and nominating Malema was part of that.

“Branches understand him to be a member,” said Lekganyane.

The Mail & Guardian has further learnt that the ANC provincial conference will resolve that the issue of Malema’s suspension needed political solution as opposed to the NDC processes, which the ANC Youth League has claimed were driven by political agenda to deal with Malema and weaken the youth league.

A senior ANC provincial leader told the M&G that the conference would not call for a decision to reverse Malema’s suspension as previously reported in the media over the weekend.

“If we do that [call for the reversal of the NDC’s decision] it would look factional. The matter does not belong to the NDC … These are contradictions of the party,” said the source.

“The message we want to send to his detractors especially in the ANC NEC is that he [Malema] is not only a force in the youth league but in the mainstream politics of the ANC. If you’re a force at the provincial level it means most should look at how they perceive Malema. This is a confirmation to show that he is entrenched in the ANC. They [his enemies in the ANC NEC] must rethink their strategy.”

The re-election of Malema’s close ally Cassel Mathale at the weekend as ANC provincial chairperson has been described as a major boost for Malema, including the youth league’s campaign to remove Jacob Zuma as ANC president at the party’s 53rd elective conference in Mangaung, Free State, next year.

Mathale’s faction is expected to make a clean sweep in the ANC’s new provincial executive committee (PEC) when delegates cast their votes later this afternoon.

Among those who are expected to be excluded from the new PEC include Zuma’s close ally, Minister of Cooperative Governance and Traditional Affairs Richard Baloyi, speaker of the Limpopo provincial legislature Rudolph Phala, deputy speaker Mirriam Ramadwa, and ousted ANC provincial treasurer and provincial minister of agriculture Dipuo Letsatsi-Duba.

The results of new PEC member are expected to be released on Tuesday at the closing of the provincial conference to be addressed by Mathale.
Earlier, Lekganyane rejected claims by Deputy Arts and Culture Minister Joe Phaahla that elections were marred by irregularities, saying that the outcome was given the green light by 13 ANC NEC members.

“Once the conference accepted the credentials any imagination of faking the results is far-fetched,” said Lekganyane.

“The ANC NEC deployees and members of the Independent Electoral Commission accepted the elections as free and fair. If there was anything untoward [during the verification of credentials] we would not have continued with the second round of elections. The leaders of the ANC are generally happy with the work that was done by the electoral commission,” said Lekganyane.

The announcement of Mathale on Sunday was greeted with wild celebrations among delegates who sang anti-Zuma songs, including the delegates’ favourite song, “Shawara wa resokodisa”, which, loosely translated, means Zuma is giving them a hard time. The shower relates to Zuma’s rape trial in which he said that he took a shower after engaging in sex with an HIV-positive woman without using a condom.

Zuma was later found not guilty of rape and acquitted.

During conference proceedings delegates demanded change in national leadership and said Zuma should not be allowed to serve a second term as ANC president, due to his indecisive leadership since he came to power in 2007 at the watershed Polokwane conference.

They also accused Zuma of poor judgment, citing as example numerous scandals including the extramarital affair he had with Sonono Khoza, the daughter of Irvin, his personal friend and Orlando Pirates boss.