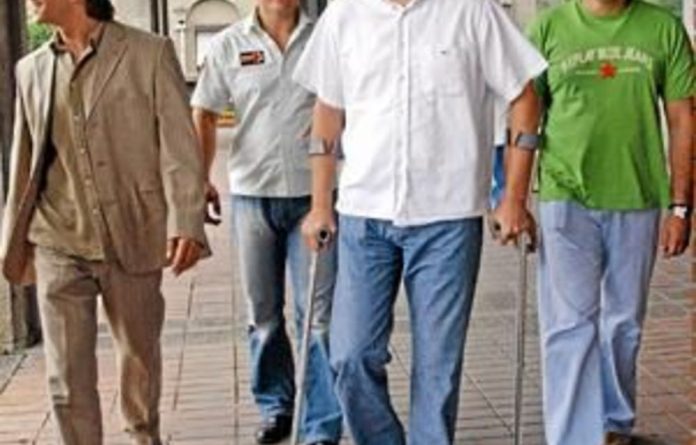 The unofficial identification of the man present with underworld boss Cyril Beeka when he was shot in a drive-by assassination in March has further deepened the mystery of his murder, its motive and its perpetrators.

Several sources close to both Kovacevic and Beeka have told the Mail & Guardian that Kovacevic is Gavric, though official confirmation is yet to come.

Hawks spokesperson McIntosh Polela said: “We are only prepared to say we are working with the Serbian authorities. We won’t say anything until the process is complete.”

The identification of Gavric adds to the circumstantial evidence linking Beeka to the South African tentacles of an extensive Eastern European mafia network.

And it raises questions about Beeka and Gavric’s roles in the murky crossover between organised crime and state intelligence services — both here and in Serbia.

At the time of Arkan’s murder, Gavric was a 23-year-old junior member of a mobile police brigade.

Serbian journalists told the M&G that Gavric was working for the Serbian secret service — at the time loyal to controversial Serb leader Slobodan Milosevic.

Arkan was an ally of Milosevic but was regarded as having grown too powerful.

Gavric was brought to trial with two other main accused but disappeared in 2006, before the final guilty verdict was announced.

A local police commander who testified that the Arkan assassination was ordered by the Serb secret service was also murdered in 2006.

Gavric, as Kovasevic, appears to have arrived on the South African radar in 2008, when the name was used to register a company called Semberia Import and Export.

A source close to Beeka told the M&G: “Sasa [Kovasevic] came to South Africa’s underground and when he got here he was offered protection by Cyril [Beeka] in return for intelligence on Eastern Europe, gangs, drugs, et cetera. The deal was that Sasa would get protection about his identity from ‘the agencies’ and in return he promised them information on all the organisations from Eastern Europe and Serbia.”

Beeka’s alleged links to South African intelligence agencies have never been substantiated, although his erstwhile association with South African Secret Service director Moe Shaik is a matter of public record.

Another source close to the investigation into Czech fugitive Radovan Krejcir’s activities said police were made aware “months ago” that Kovacevic was, in fact, Gavric.

It has also been confirmed that after the Beeka murder a small amount of cocaine was found on Gavric, but police moved to arrest and charge him only nine months later, in November, around the time when information about his true identity had already started to leak.

Although forensic evidence from the Beeka shooting suggests some of the shots may have come from inside the car — and it has been speculated that this pointed a finger at Gavric — police sources have insisted that he is not a suspect.

“Would you ask someone to shoot you in the chest and the arm if you were part of the hit? He is definitely not a suspect,” said one police officer.

But a source close to Gavric said: “He has said himself that he pulled out his gun and fired at the bike from the car.”

Other sources who were close to Beeka are not as sure and have focused their attention on business dealings between Beeka, Gavric and Krejcir.

It is also believed that, prior to his assassination, Beeka had agreed to become a witness against Krejcir.

Shortly after the Beeka hit, the Hawks launched a raid on Krejcir’s home and were reported to have found a “hit list” that included Beeka’s name.

Krejcir has denied involvement with the murder, but his connections with Beeka were extensive, notably through a proposed gold trading and refining company that was to have involved Beeka and a protégé, Herschel Maasdorp, and refinery owner Juan Meyer.

When Krejcir and Meyer fell out, it appears that a scheme to trade gold with Suriname in South America came to the fore.

Several sources who have provided information to the M&G on condition of anonymity have alleged that Krejcir, Beeka and Gavric invested in a gold deal involving two “Suriname princes”.

One source has alleged Krejcir has ties with the new government of Suriname, more specifically with Dino, the son of President Désiré Bouterse.

Krejcir, through his lawyer Eddie Classen, told the M&G: “I have never been in Suriname and I don’t know nobody from there.”

Bouterse, a former military dictator, was convicted, in absentia, of drug smuggling by a Dutch court in 1999.

He was re-elected as president last year, despite the fact that he was on trial for a series of political murders in the 1980s.

US diplomatic cables released by Wikileaks at the beginning of the year alleged that Bouterse had links to Shaheed “Roger” Khan, Suriname’s biggest drugs baron who is serving a 30-year prison sentence in the US.

Dino was also convicted in Suriname in 2005 of leading a ring that trafficked in cocaine, illegal arms and stolen luxury cars but was released in 2008 and now serves in the country’s counterterrorism unit.

Another business that brings a number of the same individuals together is a sports-betting establishment in Cape Town.

Olimp Sports Bar in Loop Street is part of a chain of betting shops in Kazakhstan, Russia and South Africa owned by Kazakh businessperson Anarbek Zhauyron.

Although Olimp South Africa is officially owned 100% by Zhauyron, it previously boasted Maasdorp — Beeka’s friend — as a director and several sources have alleged that both Beeka and Gavric had some connection to the club.

Another person previously listed as an Olimp director is Serbian national Aleksandar Ivanovic.

Ivanovic, who could not be traced, is also listed as a director of another South African company, Premier African Mining, where he shared directorships with slain Johannesburg businessperson Chris Kouremitis.

Kouremetis, known in Johannesburg underworld circles as “Mr Cocaine”, was gunned down on October 10 last year as he was about to get into his Porsche outside the Cradle restaurant, where he had been attending a wedding.

The M&G has previously reported that investigators are probing whether the murder is linked to the seizure, in August 2010, of 166kg of cocaine in an intelligence-driven bust at the port of Ngqura, near Port Elizabeth.

The M&G reported earlier this year that Cuban-born Nelson Yester-Garrido had been arrested in connection with the shipment.

Yester-Garrido is wanted in the US on suspicion of trafficking large quantities of cocaine in the 1990s and even negotiating to buy a Soviet-era submarine for a Columbian drug cartel.

In 2007 the M&G exposed Yester-Garrido’s presence in the network clustered around Glenn Agliotti, which linked a number of Agliotti’s associates and former associates to the drugs trade.