Romney on the bubble as rival Republicans wobble 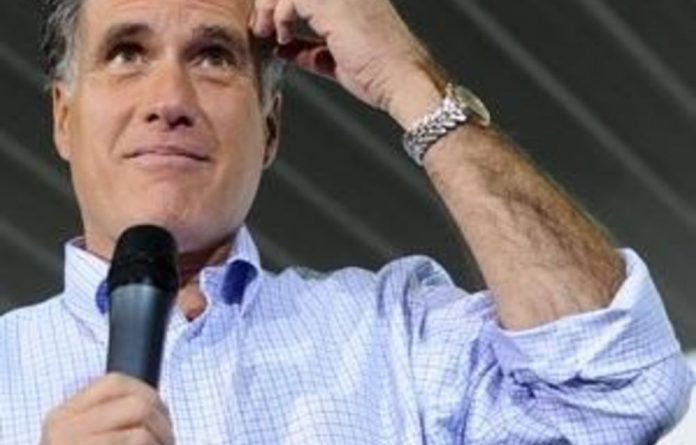 Republican frontrunner Mitt Romney is showing increasing signs of optimism in the run-up to the Iowa caucuses on 3 January as the campaign of one of his rivals for the presidential nomination came close to imploding and others struggled.

Romney has belatedly devoted time and money to Iowa, which he initially ignored, and could be rewarded with a first or second place, according to polls published on Thursday.

A strong finish in Iowa, the first of the contests to choose a Republican nominee to take on Barack Obama, would provide Romney with momentum for those that follow and could wrap up the race for the nomination by the end of the month.

Romney would then face Obama for the White House in November. Rasmussen put Romney on 45% to Obama’s 39%, his biggest lead yet over the president.

Romney’s resurrection as Republican favourite comes after a turbulent year that has seen rivals briefly occupy the front-runner slot: Michele Bachmann, Perry, Herman Cain, Gingrich and Paul. Santorum, who last week was endorsed by an influential Christian evangelical leader, is having a late poll surge.

What just happened?
Bachmann’s campaign was in total disarray on Thursday. On Wednesday night, in a surprise development, the chairperson of her Iowa campaign, state senator Kent Sorenson, drove to a Paul rally, asked one of his staff if he would like his support and went on stage to announce he was switching to Paul because of the way the Republican party was ganging up against him.

Bachmann made a bad situation worse by claiming Sorenson, who had been with her from the early days of her campaign, had gone for money. “Kent Sorenson personally told me he was offered a large sum of money to go to work for the Paul campaign,” she said, prompting her Iowa political director, Wes Enos, to put out a statement disavowing her claim and insisting no money was involved. “I cannot, in good conscience, watch a good man like Ken Sorenson be attacked as a ‘sell-out’,” Enos said. If Bachmann does badly on Tuesday, she may quit the race.

Romney, right-wing but closer to the centre than his rivals, was initially hesitant about becoming involved in Iowa after spending $10-million and hundreds of hours campaigning fruitlessly there in the 2008 nomination process. His failure to win damaged his chances in later contests.

But he has been crisscrossing the state by bus this week and attracting good crowds, backed by an advertising blitz. Either his campaign or the political action committees backing him spent $2.85-milliob advertising in Iowa in the month up to Christmas, a sum matched only by Perry. Since Christmas, a further $1.2m has been spent.

Paul appears to have the better on-the-ground organisation, but even if Romney was to come second to Paul, he would still be in a strong position as Paul, whose libertarian policies are outside the Republican mainstream, is unlikely to win the nomination.

Social concerns trumped by economic worries
In another sign of growing confidence that he can do well in Iowa, Romney announced he plans to return to Iowa for New Year’s eve after a brief campaign visit to New Hampshire and will be in Iowa on caucus night when, in anticipation of a good result, he has agreed to a series of media interviews.

The former governor of Massachusetts struggled in 2008 because social conservatives, who make up estimated 50% of the Republican caucus-goers, regard him as inconsistent on abortion, gays and other issues. But these concerns appear to be trumped by worries about jobs and the economy.

Romney refused to make predictions in public about the result. “I just want to do well here. I’m happy that I’m getting an enthusiastic response,” he said.

Larry Sabato, one of America’s leading pundits and a professor of politics at Virginia University, said: “As the primary season begins, and after a year when the polls looked like a multidimensional roller coaster, we are back where we started in January. We see Mitt Romney as the strong favourite to be the 2012 GOP presidential nominee. This outlook is the result of two factors: the weakness of the other Republican candidates in this underwhelming field, as well as Romney’s considerable advantages in money, organisation and establishment support.” —

Despite restrictions, digital spending hits record in US midterms

The midterms show Trump might not get re-elected in 2020

Contrary to what President Donald Trump has claimed, this was a bad election for him
Read more
World

US midterms: Key factors of the 2018 elections

The US midterm election has been a tug of war over key issues, but none has had a more dramatic impact on voters than Donald Trump
Read more
Advertising