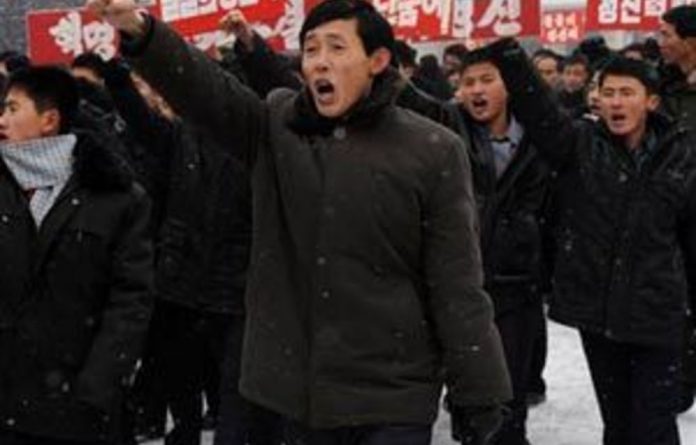 Pumping their fists and chanting, tens of thousands of North Koreans packed the snowy main square of the capital on Tuesday to pledge their loyalty to new leader Kim Jong-un as the campaign to consolidate his power deepened.

State television also aired footage of Kim’s recent visit to an elite tank unit with family and historical ties that showed him interacting with soldiers with ease and carrying out inspections much like father Kim Jong-Il and grandfather Kim Il-Sung did before him — footage that aimed to show off his youth and health and put his confidence and authority on display.

The rally and the footage were the latest steps in a carefully choreographed campaign to build support for North Korea’s new leader that began the day news broke of Jong-Il’s death last month.

In swift succession, top officials from the powerful military and ruling Workers’ party have pledged their loyalty to the son, leaving no room for doubt about whether the young man would take power.

Jong-Il died on December 17 of a heart attack, leaving the nation of 24-million in the hands of his youngest son, who was a mystery even to the North Korean people until his emergence in September 2010 as his father’s favoured successor.

Since Jong-un, who is in his late 20s, was made a four-star general and a vice-chairperson of the Central Military Commission of the Workers’ party, the campaign to groom him has been fast. Within a year, Jong-un had become a fixture at his father’s side for inspection visits to military units and factories and at official events.

Cast into the limelight
However, Jong-Il’s sudden death catapulted the son to the limelight at a delicate time for North Korea. It was discussing with Washington much-needed food aid in exchange for nuclear disarmament. North Korea has tested two atomic devices since 2006.

Jong-un did not have the benefit of 20 years of grooming like Jong-Il did when his father, North Korea founder Il-Sung, died in 1994 of a heart attack.

Instead, North Korea has sought to highlight Jong-un’s heritage as heir to North Korea’s founding fathers, underlining his physical resemblance to the late President Il-Sung and characterising him as an “identical” extension of his father.

In the documentary of his military visit on Sunday, he was dressed in a long, dark overcoat similar to the coat his grandfather used to wear. He is shown in an exhibition room lined with black-and-white photos, including an image portraying a young Il-Sung.

The footage also served to show the confidence of Jong-un, who mingled easily with soldiers and appeared to be giving them pointers in the documentary shown just days after the ruling party officially proclaimed him supreme commander of the 1.2-million-strong Korean People’s Army.

Soldiers cheered and chanted his name as Jong-un made an inaugural solo trip to provide “on-the-spot guidance” in the first official documentary of the new leader shown on North Korean TV. At one point, Jong-un leaned in to pull one man close to him to share a few words, leaving the officer in tears.

‘Wielding the saber’
“Kim Jong-un’s telling the world that even though he’s young, he’s in charge and capable of wielding a saber like this father did,” said Kim Jin-moo, a North Korea expert at the Korea Institute for Defence Analyses in South Korea.

Unlike his father, Jong-un is not observing a three-year mourning period after his father’s death. He has been active, using his youth as an advantage and distinctly public in stark contrast to his father, whose appearances were carefully calculated in the final years of his life.

Even the choice of the tank unit was a nod to history: The Seoul Ryu Kyong Su 105 Guards Tank Division was one of the first North Korean units to enter Seoul in the early days of the 1950-1953 Korean War, according to military experts. It was one of Jong-Il’s favourite bases to visit.

In Pyongyang, meanwhile, Premier Choe Yong Rim and other old guard figures who are Jong-un’s inner circle led a rally in support of the leader and the country’s goals for the new year.

“We once again keep deep in our minds that the victory of building a powerful and prosperous nation is certain, as long as there is the … wise leadership of respected Comrade Kim Jong-un,” senior Workers’ party official Mun Gyong Dok told the crowd at Il-Sung Square, according to Associated Press Television News.

Beating drums and carrying huge North Korean flags, they paraded across the square in central Pyongyang as snow fell, pumping their right fists as they chanted. Some held huge placards calling for loyalty to Jong-un and supporting efforts to improve the economy.