‘I am just here for the violence’ 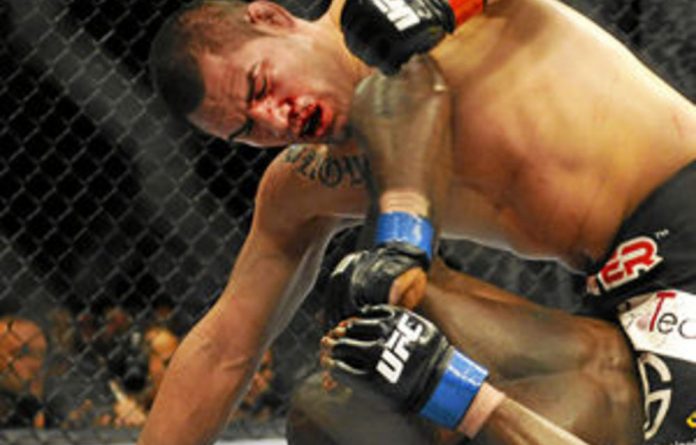 Dhiraj Wahelendar was waiting to fight. Within an hour he would step into a temporary ring set up in a film studio in the northern suburbs of ­Mumbai, India’s vast and sprawling commercial capital, and take part in one of the country’s fastest-growing sports: full-contact fighting.

Wahelendar, a 35-year-old professional martial arts practitioner, was one of 12 combatants who, wearing no protection other than groin and mouth guards and thinly padded leather gloves, were to battle one another using kicks, punches and grapples in front of several hundred aficionados who had paid up to £13 for seats to watch.

Some of the fighters were there for excitement and “exercise”, others for more basic reasons. “Where I grew up there is nothing. We didn’t have enough to eat when I was a kid. I am more scared of poverty than being hurt,” said Wahelendar, who is from the western state of Gujarat.

Members of the crowd, too, were honest about the attractions of the sport. “I just like watching men fight,” said Rashi (27), who had come with her boyfriend, a businessman “in consumer goods”, to the Mumbai event, the fourth Full Contact Championship to be staged in India.

Behind her, Anand, a 26-year-old market trader, explained his own interest in equally blunt terms: “I am here just for the violence. I want to see whether it is like on TV. I just want to see people hitting each other.” Kalyan Marpak, who runs a software start-up, said he was “just here for the gore”.

The sport is an import from the United States, where the ultra-violent Ultimate Fighting Championship, which shows fighters battling in cages, has gained millions of fans. In India entrepreneurs and enthusiasts hope to exploit a new interest and market for combat sports among the burgeoning middle class.

More than half of India’s 1.2-billion inhabitants are younger than 30 and the number of middle-class households is expected to quadruple to 150-million in the next 20 years. Other extreme sports now gaining popularity in a country in which the options were once largely limited to cricket, athletics and hockey include mountain biking and whitewater rafting.

The right time
“This is absolutely the right time for this in India,” said Prashant Kumar, an advertising executive and the organiser of the popular Mumbai competition. The event, complete with a blonde Russian woman in a miniskirt holding up the number of each round and an announcer in tails pacing the ring, was the biggest Kumar had organised.

“The big cities in India are crying out for something like this,” said Kumart. “There’s nothing to do except go to movies or a bar. This is exciting, new and easy to understand. Without any sponsors or marketing we can still get 500 people.”

The sport is now licensed and legal. A doctor tends to wounds and an ambulance waits outside in the muggy autumn night. Contestants are paid between £62 and £124. Kumar is a former fighter himself and an example of how the sport can cross class barriers in a society undergoing massive change.

One of the fighters had travelled for his first bout from a well-to-do suburb of Delhi, a 90-minute flight away. His brother, who works for Estée Lauder, had come to support him. “He is definitely not doing it for the money. He just loves to fight,” Karan Sanjay said.

Yet most of those on the bill came from poor backgrounds. As the crowd drank Red Bull and checked their BlackBerrys, the MC announced bouts featuring Nitin Gaikwand and his friend Sangram Bhakre, both from the tough provincial town of Kohlapur. One is the son of a hawker selling tea and snacks, the other the son of a small-time transport contractor.

Like many aspiring sportsmen in India, both hoped to get jobs with the army or the police as a result of their fight record. Many institutions in India have sports quotas that involve taking promising athletes on the payroll. One combatant was a paramilitary policeman.

Although alcohol was banned after earlier events got too rowdy, a DJ’s loud techno and the violence of the first three fights had raised excitement levels. By the fourth bout, the crowd had warmed up. From a ringside seat came a shout: “We want blood.”

Wahelendar, the professional fighter, lasted only a round and a half before being knocked to the canvas by a punch to the jaw. The next fight ended with a doctor in attendance, the loser bleeding heavily after being hit in the face.

Afterwards spectator Marpak said he regretted his earlier enthusiasm for “gore”. “It’s not my cup of tea. It’s too violent and too dangerous. I’m not comfortable with it,” he said. But Rashi and her businessman boyfriend had no regrets about how they had spent the evening. “It was awesome,” she said. “When that guy was knocked down … that was the highlight.” —