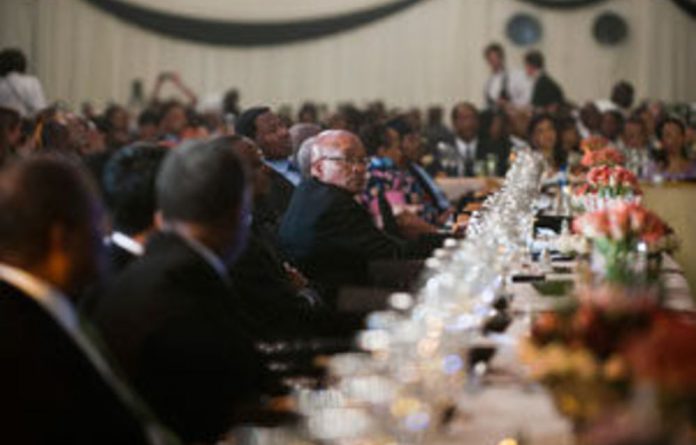 African leaders on Saturday hailed the ANC in centenary celebrations for the continent’s oldest liberation movement which inspired regional struggles for freedom.

African drums and the ritual slaughter of a bull featured in the second day of celebrations commemorating 100 years of the ANC before a gala dinner attended by more than a dozen African leaders and former leaders.

“When we talk about [the] ANC, it is part of Africa, in particular Southern Africa,” said Mozambican President Armando Guebuza at the dinner which ran into the early hours of Sunday.

“What you did made us proud of being Africans,” he added.

The ANC’s increasingly frail talisman Nelson Mandela, who became South Africa’s first black president in 1994, did not attend the celebrations of the party he led to power after the fall of apartheid.

“He is in good spirits but very, very old,” ANC chairperson Baleka Mbete said on Friday of the 93-year-old Nobel Peace Prize winner.

President Jacob Zuma, who at midnight lit a centenary flame, in the morning led the ritual slaughter of a black bull as the party’s rich anti-apartheid legacy is challenged by scandals and frustrations over enduring poverty.

Zuma took the leading role, thrusting a spear at the bull, as wisps of smoke rose from a burning traditional herb before it was sacrificed.

“Today our leaders, traditional leaders and traditional healers, had to perform certain rituals before we get into serious business of celebration,” said Zuma at the church site where the ANC was founded in 1912.

At the dinner, tributes were paid to the ANC’s formation before the continent’s other liberation movements with former Tanzanian president Ben Mkapa saying “they were inspired by the ANC”.

“My own party definitely was inspired, distinctively, progressively,” he said.

Veteran anti-apartheid icon Ahmed Kathrada, who was jailed alongside Mandela, thanked the party’s foreign supporters and said dignity had been the most important achievement of democracy.

In London, British Prime Minister David Cameron on Sunday hailed the ANC as a “beacon for the world” in fighting discrimination and oppression.

“On behalf of the British people, I want to congratulate you and everyone involved with the [ANC] on this very special anniversary,” wrote Cameron in a letter to Zuma.

“It is incredible to see the changes in South Africa that the ANC has helped to bring about,” he added.

But there were also calls to address Africa’s challenges.

“We have to fight poverty and all its offshoots of hunger, ignorance, disease, crime, corruption and above all, exploitation of one mind by another,” said Zambia’s independence hero Kenneth Kaunda who hosted the banned ANC’s headquarters.

“I extend my sincere congratulations to the [ANC] and its leader, President Zuma, on reaching this impressive milestone,” Zille said in a statement.

“These 100 years show an extraordinary record, without parallel on the continent of Africa. If the ANC is saying this is much more than a celebration of the 100th birthday of a political party, we agree. It represents a history of progress, a quest for human rights and the advent of democracy after a long, arduous struggle that took over 80 years,” she added.

She said the values espoused by the father of the new South Africa, Mandela, still resonated strongly with the people of South Africa and his humane, non-racial vision of equality for all under a democratic system led the country out of the dark days of repression and put it firmly on the path to freedom.

However, the centenary event also called for introspection and reflection as without the values articulated by Nelson Mandela, the ANC also risked becoming a rudderless vessel, Zille warned.

Going to its roots
The party was founded on January 8 1912, as the South African Native National Congress. The country’s apartheid rulers banned it in 1960, jailing its leaders four years later.

It has dominated the political scene ever since, enjoying huge wins in every election.

But South Africans are increasingly frustrated over allegations of corruption and the government’s failure to spread the benefits of their political victory more broadly — 38% of the nation still live in poverty.

Zuma himself had to fight off allegations of corruption shortly before assuming power in 2009. Cleared of the charges, he is now struggling to rein in feuding factions inside the party.

Economically, the party has drawn praise for its economic management, rolling out new electricity and water supplies, as well as housing, and inspiring a new black middle class.

But it has failed to give the poor the benefits of the post-apartheid boom.

Critics say too many people have been left to make do with shoddy public hospitals and schools, a dangerously high joblessness rate of 25%, violent crime and a grim life in the shantytowns. — Sapa