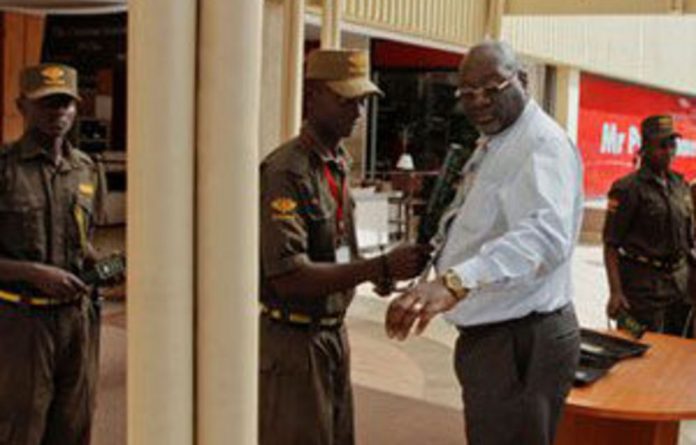 The bulletins warning of an impending assault by terrorists are rising in intensity as Kenya’s capital increases security measures in the hope of preventing what would be the first massive attack since the 1998 US embassy bombing.

The US embassy this week put out new rules prohibiting visitors from bringing electronics or laptops into the compound. Shopping malls are installing new security rules. And a new, high-end hotel has shuttered its underground parking garage.

Al-Shabaab, Somalia’s al-Qaeda-linked militant group, has repeatedly promised to attack Kenya in retaliation for Kenyan forces moving into southern Somalia in October. The group’s spokesperson threatened to bring Nairobi’s skyscrapers down, and though an attack of that magnitude appears unlikely, intelligence officials fear some attack is imminent.

One Western diplomat said recent intelligence reports show that Al-Shabaab is trying to obtain security guard uniforms they can wear while carrying out an attack, a common tactic used by militants in Afghanistan. The diplomat spoke on condition he was not identified discussing sensitive intelligence matters.

“I don’t think it’s going to be grenade attacks. It’s going to be a massive truck bomb, simultaneous attacks. This is a signature of Al-Shabaab and al-Qaida,” said Rashid Abdi, a former Somalia analyst with the International Crisis Group who is setting up an independent policy forum. “I think they want to make a huge statement.”

The US embassy this week set its new security rules. Guards have been issued new instructions to “stop and diligently screen” all vehicles with diplomatic plates on them, according to a security directive.

In 1998, a truck bomb that was parked outside the US embassy in downtown Nairobi killed more than 200 people. A simultaneous explosion detonated in Tanzania’s capital. In total 224 people died, mostly Kenyans, but also including 12 Americans.

On Tuesday a text message circulated widely in Nairobi saying that the UN had issued a bomb threat alert for Tuesday night. Kenyan police held a news conference to deny that the text message was real. Police spokesperson Eric Kiraithe said police are monitoring dozens people in Kenya who have been in contact with al-Shabaab, and “10 among them are considered lethal”.

Kiraithe also said there has been a spike of Westerners who sympathise with al-Shabaab flying into Kenya with the intention crossing over to Somalia to fight for the group. In the last two weeks seven people from Western countries, including the US and UK, have been arrested and deported after trying to make contact with al-Shabaab, he said.

A former US army soldier was arraigned Monday on charges related to trying to join al-Shabaab.

Kiraithe said Kenya has done its best to secure itself against terrorism and that no country in the world can claim to be completely secure against a terror attack.

Beefing up presence
But the atmosphere is still tense. Police are working double shifts in order to beef up their presence on Nairobi’s streets, said one senior police officer who requested anonymity because he is not allowed to speak with media.

Abdi said he is puzzled that al-Shabaab had not yet carried out an attack. That could be because its command corps has been degraded by fighting, or because the group is having second thoughts.

“al-Shabaab probably recognises that Kenya is important logistically,” he said. “It uses it as a conduit for funneling funds in and out of Somalia. It is a safe haven in many ways.”

The US embassy reissued its security warning for US citizens in Kenya late on Monday. The warning says it has received information of potential threats directed at prominent Kenyan locations where foreigners congregate, such as malls and nightclubs.

One business person at a shop selling high-end animal carvings said on Tuesday he was discounting his goods because tourist numbers are down, in part because of the rash of security warnings. He said he did not fear a terror attack despite the fact his business was adjacent to Nairobi’s Hilton Hotel, though he did refuse to give his name because he did not want to be confronted by security authorities.

Abdi said he believes Kenyans are much more vigilant than in the past.

“But all of this is new for Kenyans,” he said. “I don’t think the reality has probably sunk in, the threat that this country faces and what could happen if al-Shabaab attacks.” — Sapa-AP