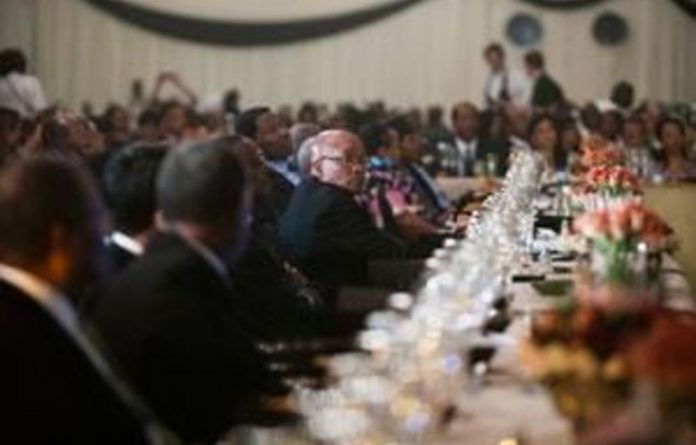 They are often accused of living like kings while their impoverished people suffer. Not this time, it would seem.

African leaders who attended last weekend's ANC centenary celebrations had to embark on some hasty shopping when they found no food or bedding at their accommodation, according to a newspaper report.

Uganda President Yoweri Museveni was apparently forced to dispatch security guards to fetch him some grilled chicken from Nando's.

The heads of state, including some of the continent's most feared autocrats, were "angry and disappointed" by the gaffe, an article in Volksblad said. But government disputes the report and says it received no complaints. It did acknowledge, however, that Museveni may have decided to order food in addition to that provided.

There was no shortage of logistical hiccups during the events in Bloemfontein marking 100 years of Africa's oldest liberation movement. More than 40 heads of state were put up at the Woodland Hills Wildlife Estate on the edge of the city — which might have proved less luxurious than it first appeared.

"The leaders allegedly had to buy their own bedding, food, pots, pans, glasses and bottled water because the ANC had ordered the owners of the houses it rented at Woodland Hills Wildlife Estate to remove all their possessions," Volksblad claimed. "There was apparently only liquor provided."

At least 15 women hired as housekeepers, waitresses and cleaners at the estate came forward to reveal how foreign dignitaries were treated, the paper said. Mampho Mmelaedi, who was working at the house used by Museveni, was quoted as saying: "Ugandan officials had to leave Woodlands to go and buy duvets, food and other necessities for the president as there was a bed without linen."

Left in the lurch
Motladi Metsing added, "Namibian officials went to buy food, pots, plates and glasses to cook for the president. I could see he was angry and disappointed."

Kenalemang Pula claimed the Nigerian delegation arrived on Sunday morning and had packed their bags by lunchtime. And President Thomas Boni of Benin allegedly "stormed out" of Woodlands Hills immediately.

Paul Kagame from Rwanda, Teodoro Obiang from Equatorial Guinea, Bingu wa Mutharika from Malawi and Namibia's Hifikepunye Pohamba were also denied the hospitality to which they have become accustomed, Volksblad added.

"They kept asking us if we worked for the ANC or for the South African government," one of the women told the paper. "Understandably, they kept shouting at us. We were embarrassed to be there."

Around 55 houses owned by private individuals had been rented out for an estimated R50 000 a day.

Valentine Rantsoareng, joint owner of the Rantsoareng hotel group, which was contracted to equip the houses, denied there had been a failure. "I think people who make these allegations are somewhat dissatisfied because they haven't been paid yet, but I have only now received the receipt for it," he said.

He added that some of the heads of state had deviated from the menu and "asked for chicken".

Nothing out of the ordinary
A spokesperson for Nando's said: "The Nando's restaurant in question was very busy throughout the weekend. Although a number of VIPs, dignitaries and security personnel purchased meals from the franchise during this time, neither the franchisee nor Nando's South Africa can confirm that they were linked to the Ugandan president."

Government denied it had committed a diplomatic blunder. International relations spokesperson Clayson Monyela said: "We don't know what these people are referring to. The African heads of state in Bloemfontein were looked after in terms of the standard protocol courtesies extended to heads of state.

"We have not received any official complaint from any of them. Some of them stayed over until Monday and had bilateral meetings with President [Jacob] Zuma. This is just a malicious thing and we don't know where it came from."

He added: "They may have requested one or two things that were not provided in the standard hospitality. It's not unexpected. If President Zuma wants something that isn't provided he sends his staff out to get it. That's standard."

The ANC's centenary celebrations were marred by technical hitches: accreditation was chaotic for many; a golf tournament teed off late after a mix-up over the deputy president's diary.

African heads of state missed Zuma lighting the "centenary flame" in the church where the ANC was founded because they arrived well after midnight. The president had to request a recap from the chaplain on their behalf before all returned to a gala dinner that overran until 3am.

Thousands of ANC supporters who travelled to a birthday rally were angry when they were locked out of the stadium which emptied long before the event was over. —