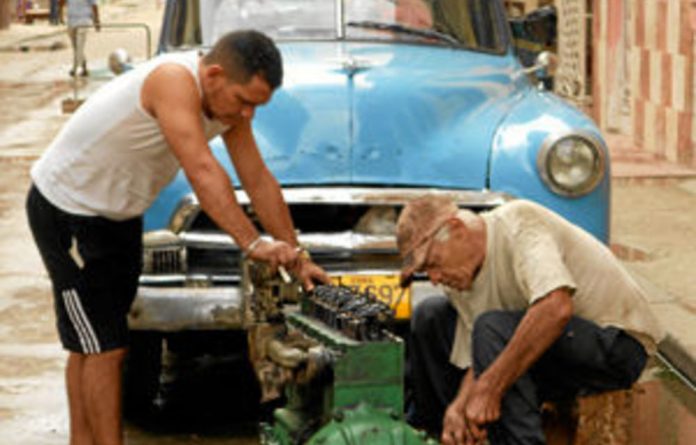 Visiting Cuba is not for the faint-hearted. It is a tough tourist destination. It is far away and expensive to get to. You will be in the air for 20 hours or more, which is no joke if you are in cattle class. Once you get there you will feel you have arrived in a different universe in which there are horse-drawn carts on the highways and the average age of cars on the road is 30 years.

There are other factors to consider. Even in restaurants catering for tourists, you will not find a service culture. Waiters ignore your efforts to get their attention, whether it is to ask for a menu or to order a mojito. And the roads make South Africa’s pothole-filled streets seem like Germany’s autobahns by comparison.

But if you are brave of heart and invested in what kind of society we live in and the kind of planet we plan to bequeath to our children, Cuba is a destination you cannot afford to miss, particularly because 2011 proved irrevocably that capitalism is in deep crisis. It is so bad that the venerable Financial Times this week launched a series titled “The crisis in capitalism”.

Cuba provides an interesting counterpoint. But if you are interested in going, do not procrastinate. If you leave it for too long the Americans — an estimated three million of them — will get there before you, once the US lifts its travel embargo. Although this is unlikely in the shadow of a US election, the decision could come soon after. Such an influx would more than double the current 2.3-million tourists who visit the island annually, a sizeable number considering that there are only 11-million Cubans.

The reason you need to get there before the Yankees is because the arrival of five-million plus tourists will undoubtedly change the island’s socioeconomic system. Some would argue that this would not be a bad thing. I would argue that it is worth experiencing a society built on a radically different set of economic and social principles before it disappears.

Retired revolutionary Fidel Castro described the revolution of 1958 as follows: “For the first time in the history of our country, both the state and the government left aside the rich side and joined the poor side.”

For 53 years the Cuban Communist Party has followed this dictum. That it has stuck to this pledge is evident in some statistics worth noting. According to the World Bank, Cuba’s infant mortality rate is six per 1 000 live births, compared with Brazil’s 19, South Africa’s 57 and the US’ eight. Life expectancy is 79 years, compared with Latin America’s 73 and the US’s 78, and it has a 100% literacy rate, compared with an average of 91% in Latin America. These raw numbers play themselves out in remarkable ways.

The first is the sense of common purpose that most Cubans have and their pride in what they have achieved. The second is that there is free education for all and free (and quality) medical treatment with a focus on prevention rather than cure. There is special nutritional support for the young in the form of daily portions of free yoghurt and milk. And there is a roof, albeit modest, over everyone’s head. The effect of this is that nobody is desperate, nobody is starving, nobody is destitute. It takes time getting used to this.

The third is the absence of a rampant consumer culture. Self-sufficiency is highly valued, fuelled both by the American economic embargo and a distressed fiscus. There is no shortage of basic commodities, but that is about it. Everything is recycled, again and again; little is wasted. The most obvious example is the ubiquitous sight of men with their heads under the bonnet of a car, fixing a clapped-out Trabant or Lada, or dismantling and reassembling an engine on a pavement.

The fourth is the absence of violence. My preferred choice of accommodation was in what are known as casas particulares, the equivalent of a bed and breakfast. In Havana, this meant staying in some of the less salubrious parts of town. The novelty for us all — South African women aged 23, 25 and 55 — was the sense that we were in no danger. The streets were safe to walk, day or night. The apparent absence of violence in communities that are evidently poor was novel.

Cuba punching above its weight
The effect of the American embargo has been to engender a high degree of self-sufficiency. Cuba punches above its weight not only in producing more doctors and engineers per capita than almost anywhere else in the world but also in innovative breakthroughs in pharmaceuticals and urban agroponics.

The catch, of course, is that these achievements have come at a price. A one-party state controls every aspect of Cuban life. The media is tightly controlled and the Granma, which is also translated into English, offers a daily dose of party propaganda. Dissent is not tolerated and the state runs everything from agricultural production to the distribution of SIM cards.

One-party states are anathema to democrats, unless you are a communist and believe that democratic centralism delivers representability and accountability. One-party states also lend themselves to corruption and abuse of power, although multiparty democracies are far from immune to them either.

Cuba is fighting its own war on this front. Until fairly recently, the proximity of a mighty enemy — the US — bent on the destruction of Cuba’s political system has served to focus political minds and ensure a remarkably high degree of discipline and clean government.

But that has started to change. Corruption is on the march and the Communist Party is finding it hard to control. In closing remarks to a session of the country’s National Assembly in late December, Cuban President Raul Castro Ruz said: “I am convinced that corruption is currently one of the principal enemies of the revolution, far more damaging than the subversive and interventionist activities of the US government and its allies within and outside the country.”

The other catch is that there is little room for private enterprise, even though the government has eased restrictions on private businesses. The result is a flat class structure, although income differentiation is becoming more marked with the steady growth of the tourism sector and a dual currency system — one for Cubans and one for tourists. But there are still no signs of conspicuous consumption or ostentatious displays of wealth.

I believe that Cuba’s model is not replicable, it is not sustainable and it is impractical. But it has made me revisit the trillion-dollar question: Is it is possible to have the cake of a caring society that meets the essential needs of its people as well as the icing of private-sector rapaciousness and individual freedoms? From available evidence it appears not.

For that reason it is worth going to see Castro’s mantra put into practice. Love it or hate it, Cuba will leave an indelible impression and make you wonder how we can better play the hand we are holding.

Acolytes of the ex-president gear up take-back regions in Mpumalanga, KwaZulu-Natal and North West before the ANC mid-term meeting
Read more
Advertising