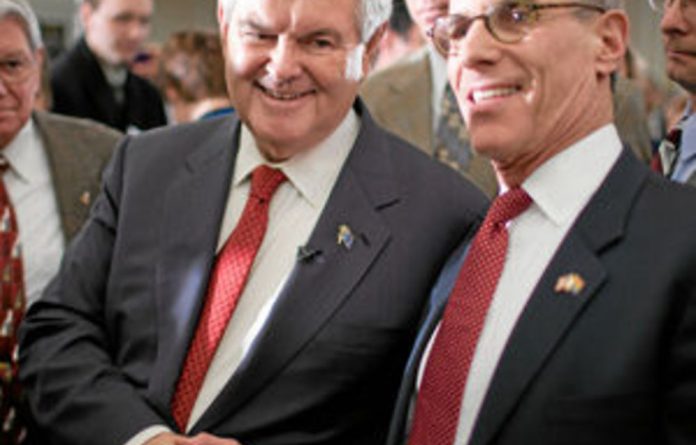 Fred Karger will certainly not win the 2012 Republican nomination, but he has at least made history as the first openly gay candidate to run in the race.

The 61-year-old Karger, who campaigned fiercely in New Hampshire last week, does not really see it that way. He proudly wears a rainbow flag lapel badge on his suit and is obviously pro-gay marriage, but he finds most voters do not care too much about his sex life.

After a long session talking to New Hampshire voters in Martha’s Restaurant and Brewery in the small town of Nashua in the south of the state, Karger said people would rather chat about the United States’s ailing economy. “I must have just met about 100 people and no one mentioned it,” he said.

The former campaign aide to Ronald Reagan and George Bush Sr instead brands himself as a free-market moderate in a race dominated by conservatives. He preaches social liberalism married with Reagan-style economics. “I am the real moderate Republican running,” he said, adding that in the past few weeks he had experienced an increasing number of people becoming aware of his message.

Yet, whether he talks about it or not, Karger’s sexuality does stand out, to say the least, in a Republican party that has lurched to the right under the influence of the Tea Party. Although most Tea Party interests lie in the economic sphere, conservative figures such as former House of Representatives speaker Newt Gingrich, former Pennsylvania senator Rick Santorum and Texas governor Rick Perry have all spoken out strongly against gay rights, including same-sex marriage and gay people serving in the military.

Perry even ran a TV advert in which he said: “There’s something wrong in this country when gays can serve openly in the military, but our kids can’t openly celebrate Christmas or pray in school.” Meanwhile, Santorum, who has long been a hero to right-wing evangelists in the US, was booed by students at a New Hampshire university last week as he tried to explain his opposition to gay marriage.

But it is not just the traditional social conservatives in the race who have taken a firm stance on gay issues. Though nominally more moderate, both frontrunner Mitt Romney and former Utah governor Jon Huntsman are Mormons. The religion, which places emphasis on traditional family structures, is firmly against gay marriage and has helped to fund campaigns seeking to stop its legalisation. That, in turn, has earned Mormonism the ire of the gay civil rights movement.

But, despite all the controversy, Karger maintains that in person few Republicans will ever mention anything to him about gay issues and are genuinely friendly and polite. Even Santorum, with whom Karger has shared a platform at several campaign events, has shaken his hand and had a friendly chat.

“I face prejudice, no doubt about it,” Karger said. “But I have also been welcomed.” —

Time for US to import some democracy