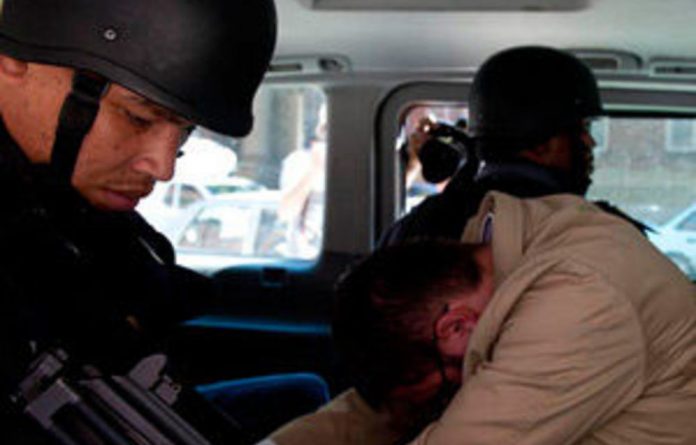 Lifman, Booysen and Gavric’s lawyer, Peter Mihalik, accused Hendrikse of “throwing mud” that had no basis of fact. Krejcir, through his lawyer, said he had met Gavric once or twice at the Teazers strip club, where they played poker, but had no other association with him.

Gavric drove the car that mob boss Cyril Beeka was travelling in when the underworld figure was killed in a drive-by shooting in March last year.

At the time of Beeka’s murder, Gavric identified himself as Bosnian Sasa Kovaevi but his true identity emerged late last year.

He has been on the run since 2006 when he was convicted of the January 2000 assassination of Serbian warlord Zeljko Raznatovi.

The Serbian government has applied for Gavric to be extradited and he was arrested shortly after Christmas. He has since applied for refugee status in South Africa.

The Cape Town Magistrate’s Court is expected to decide on Monday whether to grant Gavric bail. He is then expected to face lengthy extradition proceedings, although Hendrikse said he would also face a litany of charges for drug possession, falsifying documents and contravening immigration laws.

Called as a witness, Hendrikse said that Booysen was a suspect in the Beeka murder mystery. Arguing that Gavric was a flight risk and should not be granted bail, he sketched Gavric’s shady acquaintances in Cape Town and Johannesburg.

But Mihalik argued that Gavric’s links to all but Beeka were tenuous.

In a statement to the police after Beeka’s murder, Gavric said he and Beeka were “good friends” and that he had met Krejcir.

“I have met a lot of Cyril’s friends but mostly I know them by face. I have met Radovan Krejcir before. I think it was in Gauteng when I used to play poker.

“I think I used to have contact with Krejcir telephonically but now I have not had contact with him in the past nine months or so.”

On the day Beeka was killed, he and Gavric were driving away from a short meeting at Booysen’s house, which Gavric said was amicable but mostly in Afrikaans, which he could not understand.

However, Hendrikse said: “I have evidence to the contrary, that [the meeting] wasn’t all hunky-dory.”

According to the Gavric affidavit, Booysen, a former long-standing City of Cape Town employee, was helping Gavric with building plans for a pawn shop he was opening, so the two had met before.

Gavric also said that, after he first met Booysen through Beeka, the three watched a rugby match at Newlands.

Hendrikse testified that they watched the game from a box owned by Lifman, who was overseas at the time.

“I can confirm Booysen is a gangster, a leader of the Sexy Boys,” Hendrikse said.

“Captain, all you are doing is throwing mud and making irresponsible allegations without the facts to back them up,” Mihalik responded.

This week attorney Zubin Naidoo, representing Lifman and Booysen, told the Mail & Guardian his clients were “shocked, surprised and outraged” by Hendrikse’s allegations.

Naidoo described them as “reckless, speculative and intentionally sensational”, and said his clients were putting together a demand to the Hawks that if they were suspects they should be charged and furnished with the evidence.

Naidoo said that, without such charges, he would demand an immediate public retraction.

Beeka first rose to prominence in Cape Town where he consolidated and dominated the security structures in nightclubs through his former company, Pro Security.

He left Cape Town for Johannesburg in the 1990s but is understood to have maintained an interest in the business.

It is understood Beeka’s grip on the clubs began to weaken in the months before he was murdered and it is rumoured that, since his death, Lifman and Booysen have become more influential players in the city.

Naidoo confirmed that Lifman founded a new company in March this year, Specialised Protection Services, because there was a gap in the market following the liquidation of Pro Security.

He confirmed that the company had taken over security at a number of nightclubs in the city.

Booysen and Lifman have a long history of making money from properties sold to them in execution. Together they own 84 properties in Cape Town, excluding those owned by their companies.

In papers tabled in the Kuilsrivier Magistrate’s Court nearly a decade ago, a Kuilsrivier couple claimed Lifman was using Booysen and Sexy Boys gangsters to collect rent, under the threat of forced eviction, from occupants of houses he had bought.

Lifman and Booysen would not comment on the claims.

Naidoo said they could not recall the case. He said the pair had a long business association relating to property and added that Lifman had no relationship with Krejcir — he had merely met him once or twice.

Lifman was also in business with Yuri “The Russian” Ulianitski, who was killed in a drive-by shooting in 2007.

Lifman, who used to own race horses, was banned from the sport by the Jockey Club several years ago after allegedly intimidating jockeys. More recently, he was acquitted on charges of having sex with under-age boys.

Lifman and Ulianitski were partners in several city nightclubs and strip clubs, and Lifman retains interests in a strip club called The Empire.

Booysen is one of three brothers who became publicly associated with the Sexy Boys gang in the 1990s and early 2000s, though Jerome denied any involvement with the gang.

Michael Booysen was sentenced to life in prison for murder, and a third brother, Colin, was recently released from jail.

Serbian fugitive Dobrosav Gavric, the only known eyewitness to mob boss Cyril Beeka’s slaying by a gunman on the back of a motorcycle, has described to the Mail & Guardian what happened that day in March 2011.

Interviewed in a Cape Town restaurant the day before he was arrested on an international arrest warrant after Christmas, Gavric rolled up his sleeve to display a mangled scar on his right forearm, which was smashed by one of the first bullets.

“What do you want to know?” he said, leaning back in his chair in exasperation when pressed for an account of the shooting.

The M&G has also seen a more detailed affidavit Gavric made to police following the shooting.

In his statement, Gavric outlined his friendship with Beeka: “We often used to meet at clubs such as Cubana, Trinity and the Casino.”

He said he had been in the process of opening a pawn shop in Parow, with Beeka as a partner, early last year.

In the interview, he said that Beeka was to have provided security for the business, but he was struggling to have his renovation plans approved by the City of Cape Town. “Cyril called a friend of his who came to assist us with the plans at the municipality.”

The friend was Jerome “Donkey” Booysen, a former municipal building inspector and an alleged leader of the Sexy Boys gang.

On the morning of the day he was killed, Beeka called Gavric to meet with him at Primi Piatti at the V&A Waterfront in Cape Town.

“I arrived about 11am with a person known to me as ‘Sailor’.”

The M&G understands this to be Sailor van Schalkwyk, a Beeka associate who served jail time in New Zealand for drug smuggling.

After a short and allegedly benign meeting, Beeka instructed Gavric to drive them to the airport for a meeting.

On the way, however, Beeka instructed Gavric to turn off the N2 and they headed to Booysen’s home.

“We waited for a while and Jerome arrived with another female in his black BMW. I think that the girl could have been his daughter.”

For three-quarters of an hour they talked, mostly in Afrikaans, which Gavric could not understand, before “greeting each other goodbye in the normal fashion”.

Gavric said in the statement: “I was the driver and Cyril was seated in the front passenger seat.

“Cyril had turned in his seat with his chest almost facing the driver’s side window. Cyril was explaining to me about his younger days.”

When they stopped at a traffic light, not far from Booysen’s home, Gavric said: “I saw something stop but it was out of the corner of my eye. The next thing I recall was hearing two loud bangs going off.

“I was hit in my right arm as well as my left one and I noticed that Cyril had been hit in the chest. It sounded like a shotgun went off. There was smoke and glass and I was confused.

“I then came to my senses and I noticed a motorbike on my right-hand side. Then more shots were fired in succession.”

Gavric slammed the car into reverse, throwing the assailants off guard and probably saving his own life because the bike could not easily reverse, he explained in the interview.

Then he gave chase, firing several shots at the bike, which sped off in front of the BMW.

“The next thing I recall was my motor vehicle lifting from the ground and I lost control.”

The car rolled off the road outside the University of the Western Cape. Beeka was dead and Gavric had to be airlifted to hospital in a critical condition where he underwent surgery. — Craig McKune

Underworld bosses and gang wars — The life of Pete Mihalik