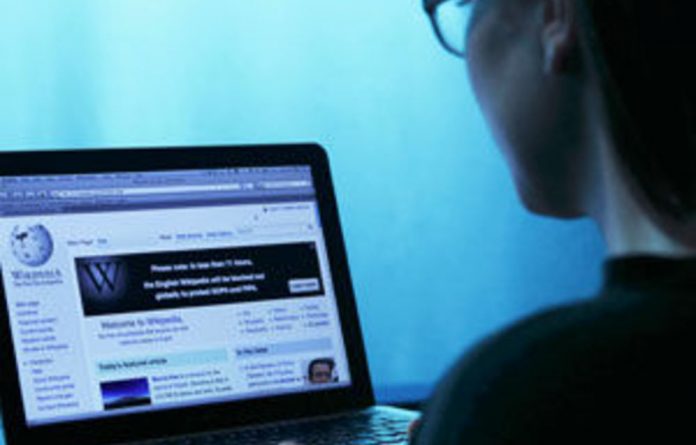 The editors of the free online encyclopaedia Wikipedia on Tuesday made an unprecedented decision to black out the English-language Wikipedia in protest over contentious anti-piracy Bills being considered by the United States government.

In a letter to the Wikipedia community Sue Gardner, executive director at the Wikimedia Foundation, said: “The blackout is a protest against proposed legislation in the United States — the Stop Online Piracy Act (Sopa) in the US House of Representatives, and the Protect Intellectual Property Act (Pipa) in the US Senate — that, if passed, would seriously damage the free and open internet, including Wikipedia.”

Although it is the largest, Wikipedia is just one of a number of popular websites including Reddit, BoingBoing, and WordPress, that will go dark on Wednesday to protest the legislation. Instead of their usual content, the websites will display a page explaining the reasons for the blackout. The blackout will begin at 5am UTC (7am South African time) on January 18 and continue for 24 hours.

Local impact
Arthur Goldstuck, director of technology research company World Wide Worx, said having Wikipedia join the protest was a “very powerful move” because it would raise the awareness of people outside the US and outside of technology and media circles.

“So many people rely on Wikipedia for research and background information; [the blackout] would expose the campaign to a really wide audience of people,” he said.

Goldstuck said one concern was that the laws would provide a poor example to other countries seeking to regulate copyright in the context of the internet. “The long-term danger is if our government chooses this as a model for South Africa, it would be a way to extend the Protection of State Information Bill into that area,” he said.

Technology commentator Simon Dingle said the Bills could make it easy for anti-competitive behaviour to proliferate. “If I don’t like your site I could suggest to your ISP that you’re hosting illegal content. They would then shut down the website to gain indemnity in the interim, until they could conduct an investigation.”

For a medium to large-sized company, every hour of downtime translates into thousands of rands in lost revenue, which could put a business out of work in a matter of weeks.

South African businesses could also stand to suffer if the Bills are taken forward. Many companies’ websites are hosted in the US because it is more economical and, in some cases, more reliable than hosting locally. In addition, much of the internet content consumed locally is based in the US.

Dingle said that if the aim of the bills was to stop piracy, they were ill-conceived. “You can’t stop piracy. The moment you convert something into bits, it can’t be controlled. The internet by default will find ways to get around it,” he said.

He said he only solution to piracy was to make content globally available to everyone who wants it. “People in South Africa aren’t watching the Walking Dead Season Two because they’re trying to be malicious. They’re doing it because it’s literally the only way they can watch it now instead of waiting [for months].”

Recapturing the market would require content creators to “cut out the middle man” — TV networks in the case of TV series or distributors in the case of music — and allow consumers to buy content online as soon as it became available.

Dingle pointed to British comedy group Monty Python as an example of this. The group set up its own official channel on YouTube in 2008 after battling to remove illegally uploaded clips of its work. That Christmas Monty Python saw a 23 000% increase in DVD sales. “Piracy is free marketing for your content,” said Dingle.

An ill-considered bill
The Bills under protest are designed to curb online piracy, particularly where this is facilitated by “rogue” websites based outside the US, and to protect intellectual property. But legal experts from the US’s top law schools have said that its phrasing is too broad and that it provides wide-reaching powers to allow companies to block access to websites, which would make the Bills easily abused.

In December, the founders of influential internet companies including Wikipedia, Google, eBay, PayPal and Yahoo published an open letter laying out some concerns they had with the Bill.

They said the Bills would:

White House in opposition
The Obama administration, which called for this type of legislation earlier in the year has now also come down in opposition to the Bill. On Sunday the administration’s top technology officials posted a blog stating that it would not support the Bills.

While recognising that “online piracy is real problem that harms the American economy, threatens jobs and hurts some of our nation’s most creative and innovative companies and entrepreneurs” the blog also stated that the administration would “not support legislation that reduces freedom of expression, increases cybersecurity risk or undermines the dynamic, innovative global internet”.

The American Congress shelved the SOPA shortly thereafter, leaving the PIPA in doubt. Despite this, those opposed to the Bills maintain that SOPA could return to the Senate next year, and that PIPA is still very much under discussion. On Tuesday, Wikimedia founder Jimmy Wales tweeted: “#PIPA is a live threat. But #Sopa is far from dead — just dormant as they revise it.”

Gauteng State of the Province address: What you need to know

Concourt must sharpen the contours of our political arguments