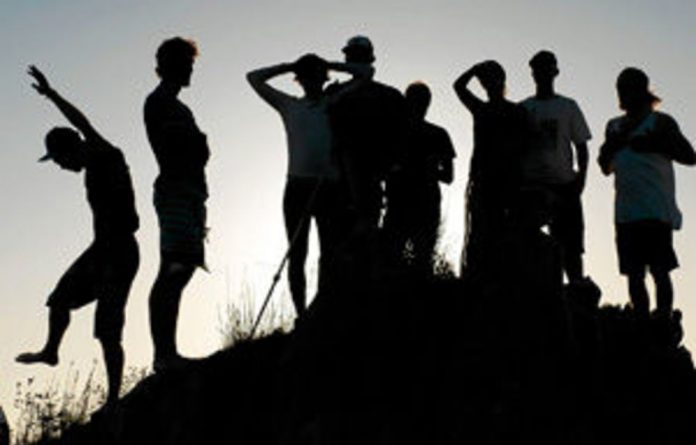 There is a travelling ­circus of men and women who tour the world with long skateboards, leather suits, Darth Vader-like ­helmets and terrible scars.

They tinker late into the night to ensure their ­longboards run true and fast. They obsess endlessly over technique and equipment and their ­conversations are incomprehensible and boring to ­outsiders.

The hardness of the urethane wheels and the precise steering movement of the trucks; the shape of the longboard and how it responds underfoot; the shape of the helmet and the flow of air over the body; the skater’s stance while cornering and drafting others at speed; to slide or ‘stick” through a turn — these are all key considerations.

Cape Town has become the key destination for downhill skating, an adrenaline-fueled sport that takes part on the steepest of slopes. The M&G’s Craig McKune is one of those brave, or stupid enough, to take part.

The skaters race one another down mountain passes: from a ­terrifying 110km/h run in Brazil to never-ending alpine switchbacks in Italy, a lakeside park outside Los Angeles and a ­former apartheid-era missile test site near Cape Town.

Every December for the past nine years a world cup downhill series, held under the auspices of the International Gravity Sports Association, has ended with the Cape Town race called Hot Heels Africa.

Explosive past
Hikers say they still find 90mm mortars on the slopes of the Kogelberg Biosphere Reserve on the eastern edge of False Bay, where a division of Armscor tested missiles until the early 1990s. The apartheid machinery also left behind a 2km strip of smooth tarmac, weaving from the remaining bunkers high on the slope along the base of a rocky ridge, passing a windswept dam and rounding a steep cliff before rolling out on to a scrubby Overberg plain.

The scene forms a good analogy for the longboarders, who speak of ‘bombing” the hills down which they skate.

On a blazing Sunday afternoon in December nearly 70 skaters, clad in hot leather racing suits, lounged at the top of Armscor’s old road, awaiting their turn. Some snoozed in the measly shade offered by the fynbos, while others nervously tinkered with their equipment — changing wheels, building aerodynamic fairings on to their helmets with cardboard and duct tape, greasing their wheel bearings, anything they believed would make them skate faster.

The skaters had travelled from North America, South America, ­Australia, Scandinavia, Southeast Asia and across South Africa to race at Kogelberg.

This was day three of the race; the first two days, a ­practice and a time-trial day, had been ­playful.

Shooting the breeze between sessions, a Canadian professional longboarder, Mischo Erban, had wistfully described to me his plans of being the first to achieve 100 miles an hour (161km/h) on his skateboard and then to be the first to do 200km/h. As it is, Erban holds a world speed record of 130km/h, broken on a secret hill in Colorado.

Up to the challenge
‘Have you found the right hill for this?” I asked, because people simply do not build roads that are steep, straight, smooth and long enough for such speeds. ‘Nah. We’re going to have to build one,” said Erban. He did not seem fazed by the challenge. ‘We’ve got the right equipment — all we need now is the right hill.”

By day three the easy banter had dwindled. Sunburned faces stared intently down the hill while the ­skaters strategised, visualised their every move and plotted lines through the turns.

Swinging my arms round and round, I scowled at the tarmac, huffed and puffed, touched my toes, stood on my shoulders and zipped up my leathers. Not having raced in five years, my plan had been to take it easy, but the occasion had got the better of me. If I wanted to get through my second heat, I would have to skate the hill faster than I had ever done before.

Four of us lined up at the start — a single white line chalked across the road — and I continued to scowl at the hill, as if this would make me roll faster than the skaters that flanked me. A remote-controlled quadrocopter, much like a tiny helicopter but with four blades mounted to a video camera, rose up from the bushes and chased us as we kicked off, thumping at the road with our feet.

We settled on our boards and let gravity take over. I tucked my back knee behind my front, shuffled my feet into a straight line and ducked my head down low as the wind started to whistle past my helmet.

Making time
A heavyset monster of a man from Brazil, Douglas Dalua, was already far in front.

I would never catch him. To get through the heat I would need to be the second person to finish. I scowled harder and pulled my arms in tighter so I could cut through the wind a little faster.

Three of us rounded the first turn at about 70km/h, inches from one another. The monster Brazilian was long gone.

The skater in front of me, Matt Arderne, glanced back, ­widened his eyes and tucked lower as we approached the second fast and slippery turn known as ‘Lloyd’s Left”.

One of them was Ian McPherson — we call him Mac — whose son, Lloyd, was killed in a crash on the turn in 2004.

Arguably, Lloyd’s memory has fuelled Hot Heels since then, keeping it going even in years when little more than 30 skaters would pitch up to race. And every year Mac has been there to support them.

Taking turns
But we did not hear the cheers as we rounded the turn. Coming out of it a little slower than Arderne, I used his draft to catch and keep up with him. If I passed him too early, he would simply be able to draft and pass me again.

The fourth skater, Kent Lingeveldt, Arderne and I passed the dam on our left and rounded a gentle right. Still crouching as low and tight as we could, we raced towards a wall of hay bales and a sharp right-hander.

Arderne darted another look behind him to see whether he had any space, but I was still inches from him. He grabbed the rail of his board and smoothly drifted around the turn. I drifted a little faster, a little less smoothly and a little too much, disappearing off the side of the road in a puff of hay, the end of my race.

Bruised and bleeding rather badly, I made my way to the finish line in time to watch the final heat.

Dalua and Erban crossed the line almost simultaneously. Erban screeched to a halt and ran back to the finish judges to find out who had won.

As I was driven off to have my knee stitched up, the last thing I saw was an enraged Erban, his face blood-red and dripping with sweat as he threw his gloves on the ground.

Ever the calm, magnanimous professional, he sent me a message hours later: ‘I should have drafted him for just one second longer! :)”