Brian Molefe: A man with a plan 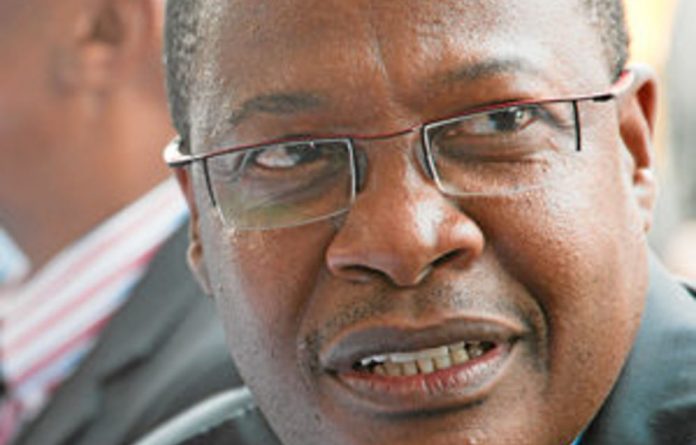 From the 49th floor of Johannesburg’s iconic Carlton Centre, Transnet boss Brian Molefe watches the menacing storm sweeping over the city centre. In the strange calm of his office, he takes a moment to reflect on his tough first year at the helm of the notoriously underperforming and ineffective transport and logistics parastatal.

It has been a rough ride. Molefe stepped into the driving seat in February last year at a time when Transnet was in the midst of a political storm over the dismissal of Transnet Freight Rail chief executive Siyabonga Gama, who was also jostling for the main position. There was instability and uncertainty.

“When I arrived there were tensions because of the Gama matter. People were unsure what was going to happen,” he told the Mail & Guardian. He described the state-owned enterprise as “Hollywood” because so many executives were in acting positions.

Chris Wells was acting chief executive for two years after Maria Ramos left for Absa in 2008. This prompted a snowball effect that put many other executives and general managers into acting posts, said Molefe.

His first task was to remove uncertainty over authority. The Gama debacle (he was dismissed in 2010 for governance breaches) weighed heavily on Molefe’s initial weeks and within a month the board reinstated Gama to the executive committee despite public outcry.

Molefe is confident those tough times are over — at least under his watch. He has a blueprint to turn Transnet’s fortunes around. This plan is starting to gain momentum, with the announcement last week of the purchase of 143 new locomotives, the near-completion of a new fuel pipeline and a R17-billion deal with Swazi Rail. “We are serious about the move from road to rail and pipeline,” he said.

Pedal to the metal
Transnet has long been condemned for its inefficient rail networks and ports, which even the treasury flagged in its October medium-term budget policy statement as partly responsible for poor investment growth in recent years as it hindered mining companies trying to ship out their products.

A reputation for delays has deterred industry from using rail.

“When I arrived here there were no schedules,” Molefe said. The existing scheduling system remained unused since the 2008 financial crisis when many trains would have to wait longer periods to fill up before they could leave. Now about 60% of the locomotives were back on a time­table, he said.

Molefe also introduced 100-day deliverables and appraisals as well as sensor technology on trains that acquire information about the quality of the tracks.

Although capacity at the Richards Bay coal terminal cannot be supported by the rail infrastructure, Trans­net has been able to deliver “un­precedented amounts” of 1.6-million tonnes of coal each week.

For the coming financial year, Molefe said the targets would increase by 9% as opposed to 2% in previous years.

In December, the Chamber of Mines commended Transnet on the improvement on the coal line as well as on the Sishen to Saldanha Bay railway line for iron ore and the Hotazhel to Port Elizabeth bay railway for manganese, which contributes significantly to revenue accruing from foreign exchange earnings on exports.

Last Thursday, Transnet signed an agreement with Swazi Rail, which will free up 100-million tonnes on the coal line. A new link between Lothair and Sidvokodvo will divert general freight business through Swaziland to Richards Bay.

Rattle and roll
In partnership with General Electric Africa, Transnet will deploy 143 new locomotives, the first new rolling stock since the 1970s, largely to the eastern corridor where the equipment is most worn. It carries general freight, export coal, magnetite and chrome moving through Gauteng, Limpopo, Mpumalanga and KwaZulu-Natal.

The engines have been sourced from the United States and the rest of the locomotives are being made in Koedoespoort outside Pretoria by staff trained by General Electric.

Although the contract was put out on tender, Transnet refused to discuss the price structure, citing a confidentiality clause.

“It was very good value for money,” Molefe said.

Last week, Transnet inaugurated the first active fuel lines of the long-awaited multiproduct pipeline. But it will carry only diesel until terminals have been built in Heidelberg. In 2013, petrol, gas and jet fuel will also be moved through the pipeline from Durban to Johannesburg.

Transnet has come under fire as the pipeline’s initial budget has more than doubled from the original projection of R11-billion in 2008 to R24-billion, partly because of many delays.

Now the parastatal has requested a 22% increase in tariffs to recoup the cost of developing the new pipeline, adding six cents a litre to fuel-pump prices.

Molefe said that the matter was still being discussed with the National Energy Regulator, which last year approved a 56% tariff increase.

It would assess the cost and determine whether the increase was fair or not. And a portion of the amount could be returned to consumers if the project’s expenditure was less than applied for, Molefe said.

Maritime design
But to lure investment, it is not just rail upgrades that are needed to appease business. Molefe claimed to have big plans for the ports too. “There is a perception that South African ports are inefficient and do not work,” Molefe said.

Inefficiencies in the Durban and Richards Bay ports, in particular, result from poor infrastructure. But upgrades are in the pipeline. For Durban, Africa’s busiest general cargo port, Transnet has purchased six new cranes, although the orders take a year to arrive. The needs of Richards Bay, the single largest export coal terminal in the world, are still being assessed.

In addition, Coega is poised to become a primary transshipment hub, where goods from east and west will be dropped off and picked up.

“The shipliners have said they will give us their business if we can fix the port and provide the proper equipment,” Molefe said.

“At the moment, shipliners are using the Mediterranean Sea. But they don’t want to go through Somalia. Port Elizabeth is the ideal alternative.”

But South Africa is accused of having some of the highest port tariffs in the world. A study conducted by the Automotive Industry Development Centre in 2007 found that Durban and Cape Town were among the most expensive in the world. And, in 2010, the National Ports Regulator found that, of 12 international ports surveyed, Durban had the highest costs for container vessels.

Molefe disputed these findings and said the comparison was unfair as many other countries subsidised their ports.

“In South Africa we work through the regulator and the regulator says we [must] recoup our money through people using the ports.”

The Transnet National Ports Authority has applied for an 18% tariff increase for the 2012-2013 financial year, sparking an outcry from industry.

Industry view
Neren Rau, chief executive of the South African Chamber of Commerce and Industry, said the infrastructure challenge would continue to be a concern for business for some time yet. “We have been losing business to other countries because of inefficiencies.”

But recent developments were highly welcome. “It is early days yet, but it is a step in the right direction,” Rau said.

He said rail was particularly important for business and the chamber would encourage its members to use rail once things got off the ground as it was becoming increasingly expensive to use road because the cost of maintenance was high.

Rau said the chamber also hoped that the new pipeline would mitigate fuel shortages in Gauteng, which was a continuing source of stress for business.

He said members were concerned about further port tariff increases as it caused South African business to be less globally competitive.

“But,” he said, “business is willing to pay for greater levels of efficiency and overall cost savings.”

Money Talks
Transnet’s funding strategy requires funds to be raised ahead of demand, minimising risks and diversifying sources in the local and international market, although the domestic capital markets provide the primary source of funding.

In 2011, expenditure on revamping rail ports and pipelines amounted to R21.5-billion and an unprecedented R86.8-billion over the past five years.

Looking ahead, Transnet said that its five-year, R110.6-billion capital expenditure programme was “insufficient to meet the needs of its customers and the economy”.

Its concerns have not fallen on deaf ears. In November, Minister of Public Enterprises Malusi Gigaba announced the possible doubling, or even trebling, of Transnet’s budget. This means capital expenditure for the next five years could potentially increase to R330-billion for investment in rail and port capacity.

Gigaba said an announcement about a “radical increase” would be made in coming months.

Rail, Molefe said, was cheaper, more efficient and greener, but not necessarily faster.

“Rail doesn’t need to be faster, it just needs to be consistent and, for us to be reliable, we need reliable infrastructure and the morale of people at the right level. It’s that simple.”

We are in deep shit, but there’s some good news – and, of course, another missed opportunity to do the right thing
Read more
National

‘I did not push for Gama at Transnet’ — Zuma