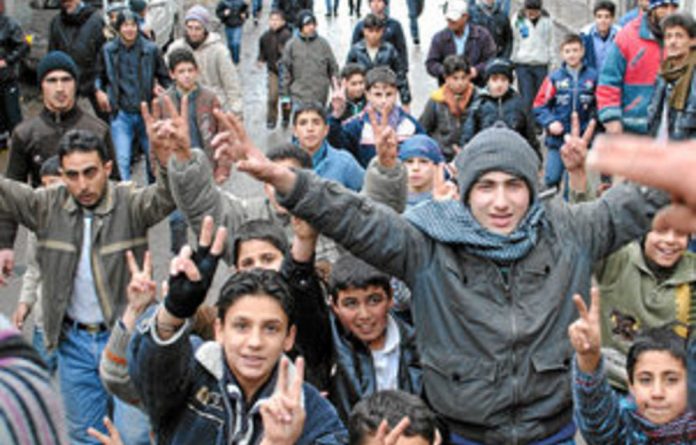 In the centre of Zabadani, in the little square by the mosque, stands what at first glance looks like a Christmas tree — a spindly plastic evergreen draped in blue fairy lights. But instead of tinsel and baubles it is decorated with photographs and pieces of cardboard bearing the names of the martyrs of the Syrian uprising. Locals call it the freedom tree.

It is here that hundreds of residents gather every evening after prayers to march through the town, waving placards and chanting slogans against President Bashar al-Assad. They do so under the watchful eyes of the Free Syrian Army, their only defence against the might of an angry government that is fighting for its survival.

“We don’t want Bashar or [his brother] Maher or their gang,” they shouted in unison on a cold and starry night last week. “The people want the fall of the regime.”

Parents and children gathered on the square to pose for the cameras they regard as a lifeline to the outside world. Women stood to one side at first, but joined the march from the rear. “The Free Army is protecting us against Assad’s gangs,” stated a poster one little boy was holding up. “YouTube is the most important weapon of our revolution,” said Amjad al-Khousi, a student. “People believe that being photographed will protect them.”

Zabadani is just 30km from Damascus, but it could be on another planet. For nearly a month the mainly Sunni town of 40 000 has effectively been liberated territory, although it is a fragile liberty that is under constant siege. Last Friday government troops launched a large-scale assault backed up by artillery and as many as 50 tanks. It is unlikely to be the last. Shelling was reported again on Tuesday. Nearby Madaya was also under attack, a thick pall of smoke hanging over it. Water and electricity have been cut off. Many residents have fled.

“Zabadani is 90% free and the other 10% is held by the strongest army in the Middle East,” said teacher Ali Abdelrahman, who was taking part in a mourning ceremony for a man who had been killed two days earlier — the town’s 14th fatality since the uprising began. “The more martyrs there are, the stronger we become and the more volunteers we get.”

Ali Mustafa Burqan was hit by a sniper as he returned home from shopping with his wife on January 8. Bloodstains still mark the spot where he lay dying at a traffic circle on a road out of town. Video clips of the corpse show the right side of his head shot away. Muhammad, his teenage son, is red-eyed and silent as mourners comfort him. “Sometimes,” said an older man, “they have orders to shoot at anything that moves.”

Zabadani is a picturesque place. Its concrete-and-stone houses climb up the steep hillsides and there are stunning views of the snow-dusted mountains near the border with Lebanon. Like nearby Bloudan, a famous resort, it is — or used to be — popular with Gulf Arabs during the summer months. It will be some time before it is a holiday destination again.

Its defenders appear well organised. Anti-Assad activists operating underground in Damascus are often students or professionals. But a key member of the local co-ordination committee here is Abu Nidal, a leathery faced, middle-aged builder who led the first demonstration last March. Other members are farmers and labourers; another is a barber. All are wanted by the Mukhabarat secret police and are proud of it.

As they huddled around the stove drinking coffee in one of their homes after the march talk turned to the Arab League monitors whose visit on Sunday brought a brief pause in army operations. The observer’s chief, the Sudanese general Muhammad al-Dabi, is himself “a war criminal”, someone complained.

The Assad regime dismisses the Free Syrian Army as an “armed terrorist gang”. But it is clear that these ragtag fighters are keeping Zabadani relatively safe. On previous raids, regime forces drove right into the centre of town with tanks, armoured personnel carriers and truckloads of shabiha (militia) thugs.

“It’s unbelievable how they treat us,” said Ahmed, an engineering student-turned-filmmaker who now documents the uprising. “Even the Israelis use things like rubber bullets and teargas against the Palestinians. Not here.”

Exact numbers and dispositions are secret, but there are said to be 70 Free Syria Army men around town and in the surrounding fields and orchards. Increasingly, though, they are out in the open, even manning checkpoints. Many are defectors from the army and Mukhabarat; some are local volunteers. Elsewhere in Syria Free Syria Army men have been accused of behaving as brutally as their enemies.

In normal times Sami, a tough-looking bearded man wearing jeans and a baseball cap, is a stonemason. Now he carries a Russian automatic rifle with a sniper sight. “I got it for $4 000 by selling some land,” he said as his four-wheel drive — no numberplates — cruised along a dirt road to avoid the nearest army checkpoint.

Film shot in the town last weekend and distributed on the internet showed a masked Free Syrian Army fighter stopping his car to paint over pro-government graffiti on a wall. He shakes his can of white paint and changes a slogan supporting the president to read: “Bashar is a donkey.”

“The Free Syrian Army in Zabadani are not terrorists,” insisted Mahmoud, an activist whose family home near the freedom tree was hit by army shellfire last week. “They are peaceful people who are trying to protect our own kids and women and ourselves. It is a reaction to a very brutal action by the Assad regime.” —