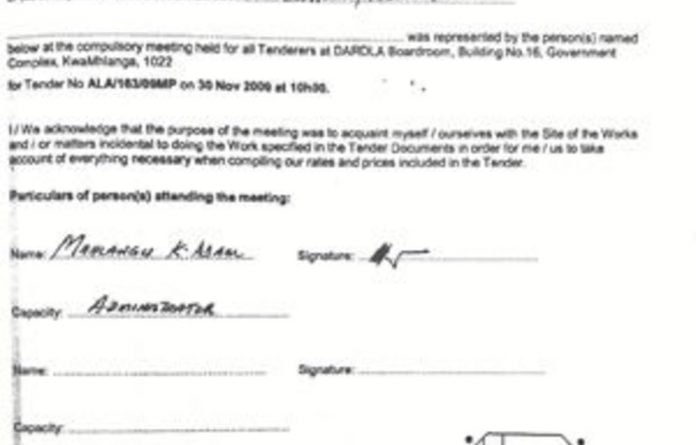 The Mpumalanga government has awarded an R11-million abattoir contract to a company accused of having links to organised crime and flouting tender requirements.

Small cattle farmers in the area have waited 12 years for the abattoir to be built, after formally asking the government to establish one in 1999.

“I was part of the initial project, but decided to leave after nothing happened,” said cattle farmer Nkomisheni Mhlongo. “We are losing money because it is still unfinished.”

Mhlongo owns 238 head of cattle, which he sells to local businesses because the abattoir is not operating.

The provincial legislature has since labelled the abattoir a “white elephant” and raised concerns about possible collusion with contractors.

African Eye News Service has copies of documents indicating that the department accepted an incorrect site-visit certificate from Sivuthumlilo.

The certificate of attendance is for a site visit on November 30 2009 for tender ALA/163/09/MP, signed by Sivuthumlilo administrator Adam Mahlangu. It relates to another departmental tender for the construction of a pivot irrigation system in the Dr JS Moroka municipality several hundred kilometres from Nkomazi. Despite this, the head of the department, Nelisiwe Sithole, approved the awarding of the tender and stamped the site-visit certificate on March 18 2010.

Sivuthumlilo’s sole director is Reagan Mkhatshwa, a former constable from the White River detective branch, who has been implicated in a card-cloning syndicate. His cousin, Raymond Makamo, a staunch supporter of Mpumalanga premier David Mabuza, was a company director before resigning in October last year. Makamo declined to explain why he left the company. He now acts as the provincial co-ordinator for the South African National Civic Organisation.

Makamo raised the ire of the ANC when he accused the former Mpumalanga premier, ANC treasurer general Mathews Phosa, of being behind the 2009-2010 service delivery protests in the province and paying journalists to write negative stories about Mabuza.

Makamo insists that he was not part of the bidding process for the abattoir. He claims he joined Sivuthumlilo in August 2011, but the records show he joined the company on February 2, a month before it was awarded the tender.

Meanwhile, the card-cloning case against Mkhatshwa was struck off the roll in the local circuit of the North Gauteng High Court last year, but state prosecutor advocate Isabet Erwee said the state intended to pursue the case again.

Mkhatshwa failed to return calls after promising to comment on the abattoir project.

“It raises the element of collusion with contractors as the only other reason for the poor service delivery on agricultural infrastructure projects,” said the chairperson of the department’s portfolio committee, Refilwe Mahlobogoane, in a report tabled in November last year.

The committee said it had asked the provincial treasury to get the auditor general to conduct a forensic audit into wasteful expenditure relating to the abattoir, but no progress had been made.

But Jeanny Morulane, spokesperson for the auditor general, said the office had not received any request to do a forensic audit and provincial treasury spokesperson Letshela Jonas admitted the treasury had not asked for the audit.

“All issues regarding the project [should] be directed to the department of agriculture, rural development and land administration as it is accountable,” said Jonas.

In the report Mahlobogoane also said the department had violated section 38 of the Public Finance Management Act and was guilty of financial misconduct with regard to the abattoir project.

Sithole has failed to respond to questions relating to the irregularities for more than a month.

She previously confirmed, however, that MEC Candith Mashego-Dlamini had instituted an investigation into the project’s management and that Sivuthumlilo was warned to complete the project “or face penalties”. She promised the abattoir would be finished by March 2012.