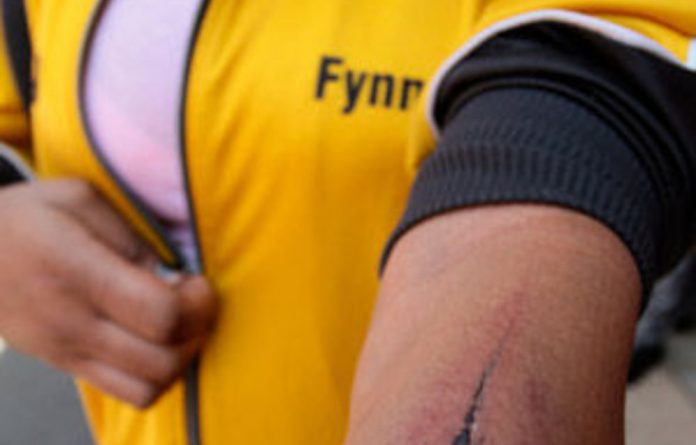 Shouts of “Zombie Ndoki! Zombie Ndoki!” (Zombie is a witch) rang out on Friday morning outside the Hillbrow Police Station as a Congolese national, identified as Zombie Fabrice by a frenzied crowd of about 50 people, drove into the building’s underground parking.

An imposing man wearing a Mobutu Sese Seko-like chapeau and a large medallion with Democratic Republic of Congo (DRC) President Joseph Kabila’s face, Zombie — flanked by police and bodyguards — walked slowly from his car into the bowels of the police station for a meeting.

The crowd of Congolese nationals made mostly of women whose husbands and brothers were arrested during a police raid in the Johannesburg suburb of Yeoville on Thursday afternoon, blamed Zombie for the arrests.

Family of the 150 people arrested, many of whom chose to remain anonymous for fear of intimidation, alleged that Zombie had instigated the latest round of arrests by bribing police officers.

Many said this was the sixth raid of its kind since the November presidential elections in the DRC.

Chris Katango, a political refugee and chairperson of the Congolese Youth League, said: “Zombie is working for Kabila and he is here to make sure that our protest against the fraudulent election result in November is oppressed.”

“Zombie was there on Thursday, pointing out people to be arrested by the police — they are working for him,” he added.

Living in fear
Large sections of Johannesburg’s Congolese community have staged protests since the DRC’s polls that many have claimed were flawed. Supporters of Union for Democracy and Social Progress (UDPS) leader Etienne Tshisekedi have argued that incumbent Kabila had defrauded the man known as Moses of the presidency.

Tshisekedi supporters were adamant that the South African government and police were working for the Kabila regime in trying to quell ongoing protests.

Theresa Farida, a Congolese national whose brother, Trindon, had been arrested in Thursday’s raid said: “[President Jacob] Zuma is working with Kabila to make sure that our voices are silenced because the South Africans want to protect their mining interests in Congo. We can’t fight in the Congo because if we say anything we are silenced, or people disappear. We have run away to South Africa but we can’t protest here too. I want to go back to my country but I want to go back to a country where there [is] freedom and not fear.”

“My brother was just drinking in the bar when the police came in and took him away — tell me, how is drinking in a bar dangerous?” said Farida.

An employee of Kin Malebu, a popular Congolese eatery on Rockey Street in Yeoville — who asked not to be named — described Thursday’s events: “At about 4pm the police just surrounded Times Square and the area around it and started beating people up and making arrests. They came into our restaurant too, looking for people.”

Targeted
Laurentine Borese, a 24-year-old, said she was walking to an internet café with her husband, Hugo Wanaldo, when they were accosted by police: “I was going to make a fax when the police came, they arrested my husband — but not before beating me,” she said, lifting her shirt to show the sjambok welts on her arms and back.

Police spokesperson Captain Dennis Adriao confirmed that 150 people had been arrested and said more arrests could happen over the weekend. He said those detained had been charged with assault and intimidation and would appear in the Hillbrow Magistrate’s Court on Monday.

He refused to comment on any possible relationship between Zombie and police and denied police were being used to quell anti-Kabila sentiment in Johannesburg.

Adriao said: “A special task team had been set up to investigate the ongoing political violence because there have been many cases of assault and intimidation opened since November.

“The arrests made came after the team’s investigations which included examining footage of several incidents of this nature … We have not taken sides, we have allowed both groups to protest peacefully but when they get out of hand and destroy property or turn violent we step in,” said Adriao.