Obama to lay out vision in State of the Union address 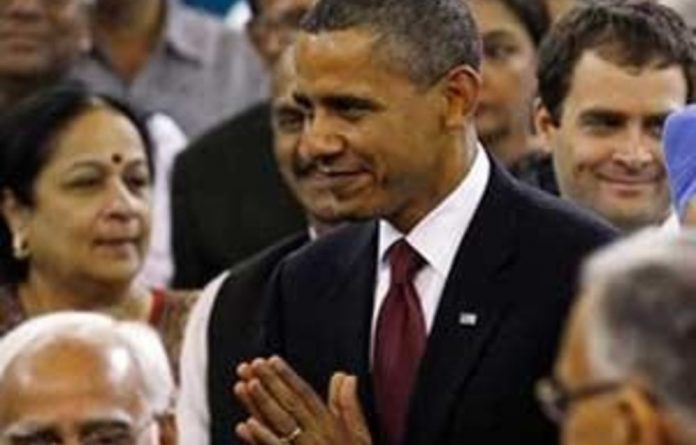 As Republicans feud in a divisive nominating melee, President Barack Obama this week takes his re-election blueprint of economic justice for all, direct and unfiltered, to American voters.

Obama will lay out his vision in his annual State of the Union address on Tuesday, seeking to defy political logic that suggests incumbent presidents lose when they ask for a second term amid sluggish growth and high unemployment.

Then, he will embark on his first cross-country campaign foray of the year, visiting five states — Iowa, Arizona, Nevada, Colorado and Michigan — that his campaign team sees as vital to his prospects in November’s election.

Obama’s third State of the Union address will pitch him into the volatile Republican nominating race, electrified by comeback kid Newt Gingrich’s win in the South Carolina primary over establishment pick Mitt Romney.

The annual televised showpiece offers the president a unique platform to beam his message into the living rooms of millions of Americans and Obama said on Saturday that he would conjure up a picture of an economy where “everybody gets a fair shot, everybody does their fair share and everybody plays by the same set of rules.”

Warrior for the middle class
With his approval ratings below 50% — dangerous territory for a president seeking re-election — Obama will renew his call for the richest Americans to pay more in taxes in order to ease the pain of the middle class.

He promises initiatives to boost manufacturing, create jobs and tap home-grown and alternative energy, though most are believed dead on arrival in a Congress locked down by hostile Republicans.

The president’s case boils down to an argument that Republicans favour the rich while he is a warrior for the middle class.

The Republican counter charge is also simple and targeted at voters weary of years of economic pain: Obama has failed to create jobs and run up government debt, and is covering up his failures by resorting to class warfare.

Obama’s aides are watching the Republican primary joust with glee.

Contempt-laden critiques
They have mocked multi-millionaire Romney over a row about his tax returns and record as a venture capitalist, which fits nicely into Obama’s populist anti-Wall Street message.

Gingrich and Romney are now seeking to outdo one another with contempt-laden critiques of Obama’s performance.

Romney paints Obama as a nice guy who is out of his depth running a country and claims the president sits idle while Iran cooks up a nuclear bomb.

Gingrich took his criticisms to a new pitch in his South Carolina victory speech on Saturday, branding Obama as a dangerous radical “so weak that he makes Jimmy Carter look strong”.

The attacks delight conservatives desperate to floor a president they revile, but could backfire by complicating the eventual Republican nominee’s bid to court the crucial political centre ground.

He has often appeared weighed down by partisan brawls in Washington, but Obama’s competitive fire still burns strong and he seems to relish the chance to turn on the campaign trail theatrics.

He even burst into song on Thursday in New York, crooning: “I’m … so in love with you,” to supporters as he piled up campaign cash and positioned potential Republican foes as extremists.

The White House insists that Obama has yet to throw himself into the campaign proper, despite a flurry of swing state events and fundraisers, keen to avoid claims the president is neglecting his job for political gain.

But Obama’s travel reflects his campaign team’s strategy for amassing the 270 electoral votes needed to win the re-election in November.

In far western Arizona, Obama hopes to profit from changing demographics and Hispanic support to spring an upset on Republican turf.

Another Hispanic bastion, Nevada, is next, before he visits Colorado where he inspired first-time voters in 2008 who are less enthused four years later.

The president will wrap up his trip in Detroit, Michigan, where he will tout his role in saving the mighty US auto industry with an unpopular bailout early in his term when the economic storm clouds were at their darkest. –AFP