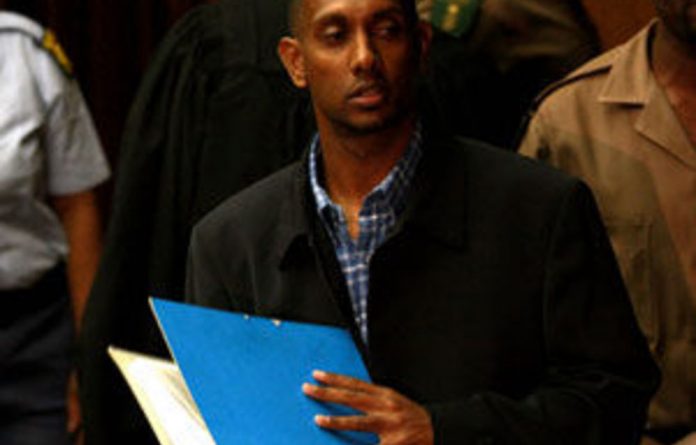 Convicted murderer Donovan Moodley argued in the South Gauteng High Court on Wednesday to be retried for the 2004 kidnap and murder of university student Leigh Matthews.

He was applying for a retrial — something without precedent in South African law — because he wanted to tell “this version of the truth, which I maintain to be the truth”, he told the court.

Moodley, who elected to represent himself, said the former investigating officer in the case, Piet Byleveld, had forced a confession from him.

He claimed Byleveld tortured him during the interrogation and abused his power to ensure his conviction and lengthy prison sentence.

Wearing a dark suit several sizes too large for him, Moodley read an “exhaustive, all-truth bearing” affidavit to the court.

Judge Joop Labuschagne interrupted Moodley twice to remind him that he had already read the documents.

Life imprisonment
Moodley was found guilty in 2005 of murdering and kidnapping Matthews, as well as extorting money from her father, Rob Matthews.

He was sentenced to life imprisonment for the murder, 15 years for the kidnapping, and 10 years for extortion.

Moodley said he initially told Byleveld and seven other police officers that three drug dealers — named Frank, Allie, and Jemba — orchestrated the kidnapping from the parking lot of Bond University on July 9 2004.

Moodley told the court Byleveld had stood on his chair and lifted his handcuffed arms up from behind.

“The pain was too much for me and I cried.”

Byleveld then told Moodley that “I must say I did it alone” because he could not direct the police to Frank, Allie, and Jemba, who he claimed had coerced him into helping them with the crime.

‘Quite stupid’
Moodley said the confession should have been made before a magistrate.

“[But] they knew I would tell the magistrate what was happening.”

Moodley said he had been too afraid that the drug dealers would harm his family if he implicated them, and so acquiesced and took the blame himself. He said this was why he originally pleaded guilty.

In an SMS Matthews was forced to send her parents, Moodley said she referred to her captors as “they”, proving that he had not acted alone.

“But [the SMS] was lost because it suits Byleveld’s purpose.”

He repeatedly told the court that the way in which the crime was committed was “haphazard” and “quite stupid”.

‘Too clever’
Moodley went into the details of the kidnapping, extortion, murder, and disposal of the body, and frequently said there were more efficient ways these could have been achieved.

By way of an example, he said: “It would be easier to move a body with rigor mortis rather than a body that wobbles.”

Prosecutor Zaais van Zyl said Moodley’s constant argument that he was “too clever” to have committed that particular crime indicated a familiarity with the events that heavily implied he was behind the crime.

“He is, with respect, too clever to have pleaded guilty if he didn’t do it.”

He said that when Moodley pleaded guilty, it was not up to the prosecution to disagree with him and try to prove him innocent.

Van Zyl said Moodley’s claims against Byleveld should have been raised during the trial.

He said Wednesday’s arguments were an admission by Moodley that he had repeatedly lied to the court under oath.

Changed statements
In his affidavit, Moodley also claimed that Matthews’s father had changed his descriptions of her kidnapper.

“Rob Matthews changed his statement to say it was an Asian man with an Indian accent.”

Moodley claimed that Rob Matthews had previously described the man who collected the ransom as black with no accent.

“There was absolutely no way of convincing anyone that Mr Matthews’s second statement was a lie,” Moodley said.

This was because he was unaware at the time that Matthews had changed his description of the kidnapper.

It was only changed to match him after he was identified as a suspect, Moodley claimed.

Van Zyl this was unfounded, as Matthews had said black — as opposed to white — rather than African in his first statement.

‘In no state’
The statement was taken at a time when Matthews was “in no state” to make a statement as he was physically and emotionally exhausted after searching for his kidnapped daughter the whole night.

The fact that an Asian male was identified also did not point directly to Moodley, Van Zyl said.

Moodley also disputed that money deposited into his bank account was the ransom money.

“Again, I was a financial manager … I would not have made the mistake of depositing it into my account.”

The money came from the sale of his BMW to fund his studies, Moodley said.

Van Zyl said it appeared that Moodley had nothing new to tell the court and that, as such, the court was unlikely to arrive at a different conclusion to that of his original trial.

‘Preposterous story’
It was also telling that Moodley had been through three attorneys before deciding to represent himself, indicating that perhaps “nobody was prepared to go ahead with this preposterous story”, he said.

Van Zyl ridiculed Moodley’s argument that media interest in the case made had him appear guilty and had contributed to his receiving a harsher sentence.

“Nothing in the media could have induced him to plead guilty; in fact he confirmed details in court,” he said.

“There is no evidence that the three musketeers were anything but ghosts.”

The prosecution resumes its arguments on Thursday. — Sapa