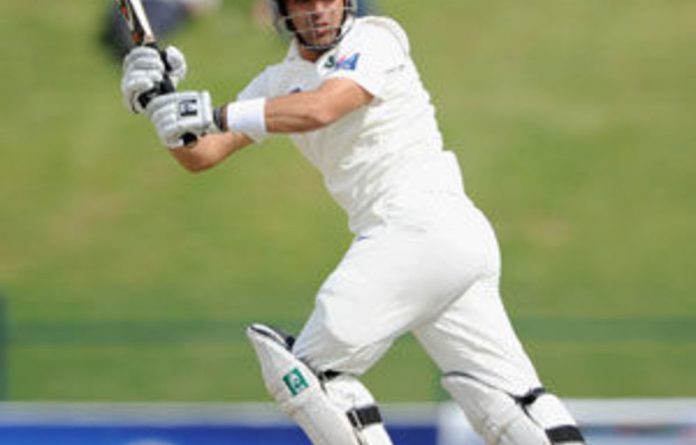 England’s pace-cum-spin attack delivered the goods to keep Pakistan down to 256-7 on the opening day of the second Test at Abu Dhabi Stadium on Wednesday.

Paceman Stuart Broad took 3-47 while spinner Graeme Swann (3-52) bowled well to keep England’s hopes of squaring the three-Test series alive after they lost the first match in Dubai by 10 wickets inside three days.

Skipper Misbah-ul Haq, unbeaten on 83 at the close with Saeed Ajmal on nought, held the Pakistan innings together during a fighting stand of 100 for the fifth wicket with Asad Shafiq (58).

That partnership helped Pakistan revive their innings after Broad chipped in with two wickets in the post-lunch session but England got three more wickets in the last session, two of which were claimed by Swann.

“I think we lost two wickets more than we would have liked, but Misbah is still there and if we manage a total of around 300 to 350 then our bowlers have a good chance because the spin on the pitch has surprised everyone,” said batsman Taufiq Umar.

England, ranked as world No. 1s in Test cricket, could have had a more fruitful day had they not dropped four regulation catches, but Broad and Swann made sure their fumbles did not prove too costly.

James Anderson dropped Misbah on 30 off Monty Panesar, while Cook let off Shafiq off Swann on 53 before Andrew Strauss floored Adnan Akmal on nought in Anderson’s first over with the second new ball.

Rewarded
Misbah notched his 12th half-century in 14 Tests — and 16th in all — since being made Test captain in October 2010 and holds the key for Pakistan to post a challenging total on a pitch that was expected to help batsmen.

The Pakistani skipper has so far hit five boundaries and four sixes — all off Panesar — during his fighting 168-ball knock.

Swann dismissed Abdul Rehman leg before for nought in the penultimate over of the day.

England were rewarded for picking two spinners in Swann and recalled left-armer Panesar after they introduced spin as early as in the 10th over.

Openers Mohammad Hafeez and Umar, who put on 114 for the opening wicket in the first Test, negotiated the first hour without any discomfort before Swann gave England the breakthrough.

Umar misjudged a delivery and lost his off stump after seemingly playing no stroke on 16.

Replacements
Panesar, brought in to replace paceman Chris Tremlett — flying home after a recurrence of a back injury — dropped Hafeez off his own bowling but had the Pakistani opener bowled off the very next ball.

Hafeez made 31 with four boundaries.

Broad then chipped in with the wickets of Younis and Ali, both bowled on incoming deliveries to leave Pakistan struggling at 103-4.

The inclusion of Panesar, playing his first Test since the July 2009 Ashes Test in Cardiff, is the first time England have played with two spinners since the Dhaka Test against Bangladesh in early 2010.