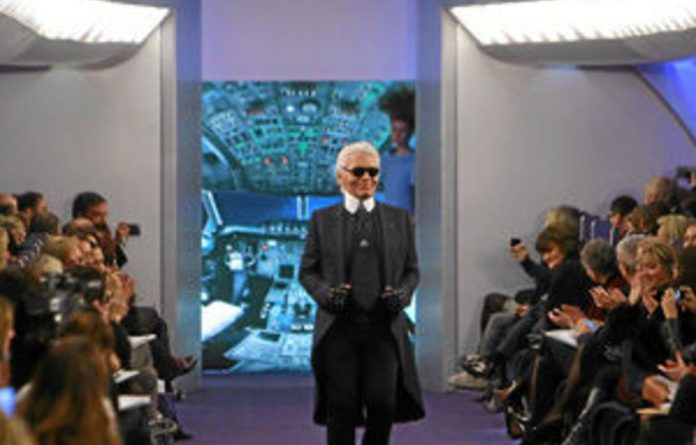 The invitation to Chanel’s haute couture show in Paris held a few clues what was in store.

First was the front cover, which featured a sketch of blue sky and white cloud within the oval outline of an aeroplane window. Second were the seat numbers: Daphne Guinness was in 10D, Cameron Diaz in 12C, and Vanessa Paradis in 16F.

For anyone mourning the demise of glamour in air travel, this was a journey not to be missed.

Despite Karl Lagerfeld’s public image as a peacock who takes himself rather too seriously, he never forgets that fashion should be fun. With a rudderless Dior currently sleepwalking through the seasons and most haute couture salons content to produce beautiful but rather po-faced homages to couture workmanship, Chanel is the unrivalled hot ticket of the schedule.

Indeed, Lagerfeld’s strongest competition is the ghost of catwalks past. Last season’s set was a neon replica of the Place Vendôme, complete with Coco’s statue. Lagerfeld’s challenge is to make his audience forget his last unforgettable show six months ago.

A journey of creativity
This show was first-class. Lagerfeld’s flight of fancy took the golden age of travel as a starting point for a journey that headed into the future.

The audience was welcomed at the entrance of the Grand Palais and led through an airport terminal of metal corridors into the mock interior of a jumbo jet, complete with airline seating, low-level lighting and blue skies visible through the small windows. Instead of gilt chairs with calligraphed labels, there were airline-style seats with electronic numbering on either side of an aisle.

Champagne was served from a trolley wheeled along a carpet dotted with a discreet double-C logo.

The attention to detail is not just a gimmick, but serves to remind the audience that the core value of Chanel haute couture is the pursuit of perfection with no heed to cost.

Simple perfection
The first dress of the show was an idealised vision of chic, like an early 1960s flight attendant: an immaculate bouclé sheath dress, with a wide boat-shaped neckline and dropped waist, in a shade of baby blue that would look saccharine if the outline were not so simple.

But Lagerfeld is never interested in nostalgia, so this was unlikely to be a tribute to Pan Am styling.

The second outfit to emerge was a dress in royal-blue wool, simply cut but for a subtle padding of the cap sleeves, which lent a hint of Star Trek.

The scene of rolling white clouds through the windows morphed into a dark, starry sky — and before long, into an image of the Earth as seen from outer space. As the show went on, the models’ mohicans became ever more extravagantly gravity-defying. The texture of the clothes shifted from classic bouclé tweed into glitter-threaded denim to suggest a starry sky, and then into layers of opalescent pebbles that resembled a moonscape.

Throughout, the silhouette was lean and curveless, with straight up-and-down dresses whose wide necklines almost matched the width at the hips.

Down to earth
Lagerfeld is focused on the future of fashion this week. Alongside his haute couture line, he is debuting his new “Karl” label. Karl is to be sold exclusively online, and at premium high-street prices, starting at £20 for accessories, making it the polar opposite of haute couture.

With Donatella Versace making a return to haute couture on the back of her successful H&M line, the exclusive couture world has declared price-tag snobbery to be very 2011. —