Army up his sleeve: Mugabe’s military strongmen likely to stay 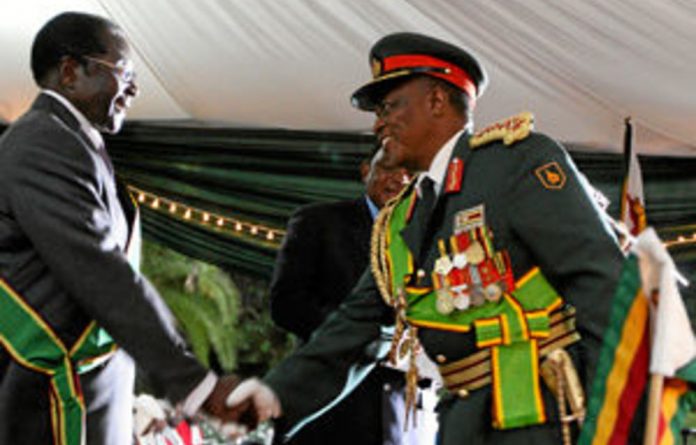 A strong indication that Zimbabwean President Robert Mugabe will unilaterally ­reappoint key military allies when their contracts expire at the end of the month has fanned fresh dispute in the country’s troubled unity government.

The two Movement for Democratic Change (MDC) parties led by Morgan Tsvangirai and Welshman Ncube have now threatened to fight Mugabe “legally and politically” in a bid to block the reappointments, which observers believe will strengthen Mugabe’s position ahead of elections expected this year.

Although Mugabe is on leave, his spokesperson, George Charamba, has warned the MDC to back off. “That is a no-go area. When the president sees it fit he will extend the terms of office of Chihuri and Chiwenga. It’s not a matter for the global political agreement. After all, the security sector has one commander-in-chief, not one-and-a-half. It is just one and the defence forces are not subject to interparty negotiations.

“When we get to security-sector reform and they tamper with that area, then the global political agreement goes up in smoke. That is one matter where nothing will change.”

Since last year the two MDC formations have been pushing for a raft of security-sector reforms meant to rein in the military, which has assumed the de facto role of kingmaker in the country’s politics.

Support for Mugabe by the military’s top brass was manifest in the flawed June 2008 presidential run-off election when the military launched a violent crackdown against voters under “Operation Mavhotera Papi?” (Where did you vote?)

Furthermore, the pledge by the military chiefs not to support “any leader without liberation credentials” is also regarded as a central plank in the 87-year-old Mugabe’s continued grip on power.

Ncube, president of the smaller MDC, said: “We have repeatedly made our position clear regarding these people. They must go because we want fresh people who are impartial and professional. We want people who will bring a fresh breath in our institutions so that they regain the confidence of the people.”

The two MDC formations further allege that the military runs a “parallel government”, headed by Chiwenga, which works directly to undermine the operations of the unity government.

Douglas Mwonzora, the Tsvangirai-led MDC party spokesperson, said: “We will not just … let Mugabe do what he wants. We will do all things possible to have that matter resolved. Those people have overstayed their welcome. We want a renewal in the security sector. We have professionals in the military who definitely would fit in those positions.”

Chiwenga took over as army commander in 2005 after the retirement of late army commander Vitalis Zvinavashe. In recent years he has styled himself as the leader of the hardliners in the military and Zanu-PF opposed to giving ground to the MDC and democratic reforms.

Chiwenga reputedly has presidential ambitions and may seize power in a bid to break the deadlock in Zanu-PF’s succession race that has pitted Deputy President Joice Mujuru and Defence Minister Emmerson Mnangagwa against each other.

Chihuri has taken a more visible role in the partisan support of Mugabe and Zanu-PF. He has served as police head since 1993 and has had his contract renewed by Mugabe 13 times since 1997.