Politics, posturing and the people 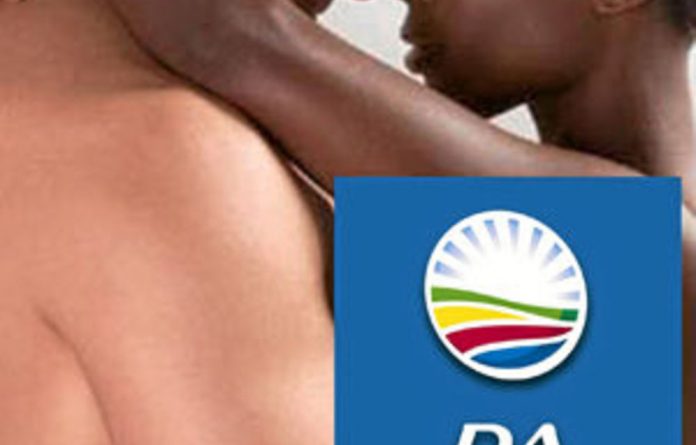 A poster from the Democratic Alliance Students’ Organisation depicting a seemingly naked mixed-race couple in a passionate clinch provoked howls of outrage from the Christian Democratic Party this week, but advertising professionals said it was a breath of fresh air.

Branding expert Gordon Cook said the poster, which carried the tagline “In OUR future you wouldn’t look twice”, indicated that political campaigns in South Africa were “boring”.

“They were all so inside out: ‘We are going to do this, we are running the best city.’ This one is different in that it’s directly addressing a social issue. It’s saying: ‘OK, what’s important is this social issue that has other consequences so we raise debate with regard to getting people to think about it, so it’s outside in’.”

Cook, a co-founder of the Vega School of Advertising, believes that voters are suffering from “promise fatigue” as a result of how South African political parties have traditionally designed their campaigns. “The model for political communication in this country has been a big face and a big logo and a big promise,” Cook said.

“We have promise fatigue — you have to come up with a message I can consider, don’t promise me stuff I know you can’t deliver — don’t keep promising things that a very sceptical audience already has fatigue in regard to. I think the youth have been there, done that and are bored with it. Yes, this poster could have been executed better in some respects but the main point is that it’s fresh, it’s different and other parties can learn from it,” said Cook.

Political analyst Adam Habib agreed that until recently political advertising in the South African context has been largely ineffective. “I think political parties largely spoke to their traditional constituencies and were not particularly innovative.

“In the 2011 elections the DA went out of its way to project an alternative image of the party. Its campaign posters mainly profiled, [Western Cape Premier Helen] Zille, [Cape Town mayor Patricia] De Lille and [DA parliamentary leader Lindiwe] Mazibuko. It was deliberate and effectively spoke to the gender, racial and generational dimensions of identity. So I think the political advertising in our society is beginning to take off and it will force everyone to become effective,” he said.

Although Habib admitted that the student organisation’s poster had attracted attention, he said it could be viewed as caricaturing nonracialism. “I am not sure I think this poster is appropriate to depict nonracialism. If it had been one among many other depictions, maybe. But as the only reflection, one must ask questions. Is nonracialism mainly about having relationships across the colour line? Does this poster not caricature the nonracial agenda?”

Habib also said that although he would not go as far as Botha in criticising the poster, questions about whether political parties should be contributing to the early sexual awakening of children through the overt sexualisation of advertising may be valid. “But remember, this is DA youth, not the DA,” he said.

John Hunt, worldwide creative director for TBWA Hunt Lascaris — considered to be one of the leading advertising agencies in the world — said that social media were a significant contributing factor to the evolution of political advertising on a global scale. “Political advertising historically has been much a monologue — political parties told you what they stood for – now it’s turning into a dialogue. Constituencies can tell you what they think of you,” he said.

“Obama used this fabulously well — he had grassroots discussions with his constituencies. Locally, I think we’ll move that way too.”

Hunt, who was involved in designing the ANC’s first two election campaigns, said the relationship between the party and the advertising agency was completely collaborative. “We had very smart field intelligence running independently who told us on a daily basis what the electorate were feeling and we would write adverts accordingly, based on that. We’d give them ideas and they’d soak them up and come back to us with their thoughts.”

Hunt said political parties needed to understand the mood of the nation when designing their campaigns. “You have to talk to them, not at them. I think the market is getting more and more sophisticated and we should be careful not to treat people with disrespect. The younger market sees right through that; they’re much more media savvy and they want dialogue.”

An evaluation of the net result is crucial in designing communication material, said United Kingdom-based Benedict Pringle, who seeks to document and analyse political advertising on his politicaladvertising.co.uk blog. “Are the audience you’re trying to win over with your communications more important than the audience you risk offending? If not, don’t run the advert.”

But, Pringle said, the poster had overcome the first challenge for any piece of communication — to get noticed. “This poster was placed around university campuses. To have any chance of cutting through the thousands of other messages aimed at students on a daily basis, your communication must grab people’s attention [particularly if the thing you’re advertising is a political party]. This poster by the DA has clearly achieved that.

“You have to deliver a message to your audience that will be both appealing and motivating. The idea of a society in which a person’s race isn’t a factor, particularly in a romantic scenario, will certainly appeal to university students, who are typically young, upwardly mobile and comparatively liberal relative to the rest of the population,” he said. “I would expect this poster to be effective for the audience that it was intended for. It’s an engaging piece of communication that delivers a clear and simple message that is likely to be salient to students.”

Pringle said that in designing political communication there is a need to be authentic.

“Define your target audience. Say something that’s both true and motivating. Keep it simple. Be brave. Don’t target people who have already made up their mind … and don’t lie to yourself about what people think of you.”