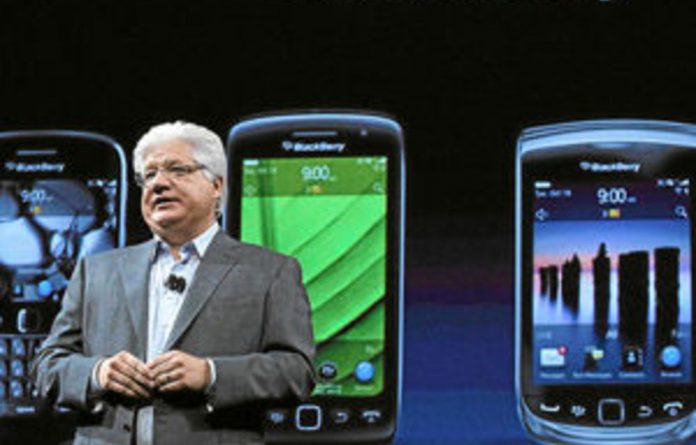 It is the addictive email phone that became a must-have for high-flying executives. But service outages and failure to keep up with the iPhone mean BlackBerry’s popularity is waning and its creators have paid the price.

Mike Lazaridis and Jim Balsillie have stepped down as co-chief executives and co-chairs of Research in Motion (RIM), the Canadian company they brought to international prominence by inventing the first successful smartphone, years before Apple appeared on the telecoms stage.

Hoping to pacify investors horrified by the 88% decline in RIM’s share price since its $148 peak in June 2008, the board has named long-serving chief operating officer and former Siemens employee Thorsten Heins as chief executive.

“As with any company that has grown as fast as we have, there have been inevitable growing pains,” said Heins in a statement. “We have learned from those challenges and, I believe, we have and will become a stronger company as a result.”

Barbara Stymiest, a previous head of the Toronto Stock Exchange and a RIM board member since 2007, has stepped into the chair. Lazaridis remains as vice-chairperson and Balsillie will retain a seat on the board but relinquish all management responsibilities.

The shake-up failed to allay Wall Street concerns, with the shares down 7% earlier this week to $16 and one activist investor describing the new structure as a “transitional move”.

“The worst thing that you can do in putting an albatross around the neck of the new chief executive is to put the former chief executives on the board,” said Vic Alboini, whose Jaguar Financial investment fund has led calls for a break-up of RIM. Apple and Samsung, the South Korean electronics giant, have been reported as taking an interest.

“My bet would be there is a new chief executive brought in from outside. This to me is a transitional move. Shareholders are not going to have a lot of patience if results don’t start to sparkle,” said Alboini.

He urged Lazaridis and Balsillie to leave the board, with Roger Martin, a dean at the University of Toronto, and John Richardson, who has been replaced by Stymiest as lead independent director. Heins has been with the company for five years, overseeing its handsets and more recently hardware and software engineering.

In that time RIM has been beset by delays and product misfires. Conscious of the need to produce a faster touchscreen to keep up with the iPhone and Android models, the BlackBerry range was due to upgrade to a new operating system called QNX in the first quarter of 2012. The launch has been delayed until the end of 2012.

RIM’s tablet, the PlayBook, billed by Balsillie as “the most significant development for RIM since the launch of the first BlackBerry”, has shipped just 900 000 units at the last count since its launch. By comparison, more than 50-million iPads are estimated to have been sold since its launch in 2010.

“Heins is a product execution guy, he’s not a visionary,” said Morgan Stanley analyst Ehud Gelblum. “Heins has to give people a reason why they need a BlackBerry. It’s going to be very difficult for him.”

Heins told analysts RIM needed to engage more with consumers and its core business users. He is recruiting a chief marketing officer to promote the brand. “We innovated while we were developing the product and this needs to stop,” he said. “Execution has to be really precise.”

With a product once so addictive it became known as the “CrackBerry”, RIM has proved itself capable of reinvention but on a limited scale. Its BlackBerry messenger service has been widely adopted by British teenagers and its role in helping to organise last year’s looting earned the handset a new nickname — the “riotphone”.

In a statement Lazaridis said: “There comes a time in the growth of every successful company when the founders recognise the need to pass the baton to new leadership. Jim and I went to the board and told them that we thought that time was now.” —