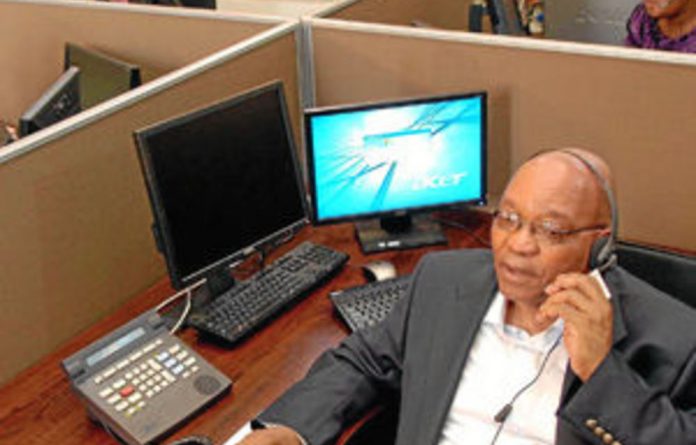 Business owner Theo Kotze had a problem he thought the presidential hotline could solve. For years he had been trying to get the Johannesburg city council to sort out his municipal account, but unlike thousands of ratepayers raging about inflated bills and electricity cuts, Kotze was trying to pay back funds he believed he owed.

“In 2008 the council assessed the property the business owns and changed our account from a business to a residential. This, even though our title deed shows that the property is in a business zone,” Kotze told the Mail & Guardian this week.

“We have phoned the call centre managed by the City of Johannesburg so many times and sent staff into the council offices, but without success.” Kotze then found the email address for the presidential hotline and thought he had found his solution. He emailed the hotline and held thumbs. “The mail went through to the presidential hotline on August 5 2011. I heard nothing back and another email was sent on November 30 2011.”

The presidential hotline was launched on September 14 2009 by President Jacob Zuma to support his vision of “an interactive, accessible and compassionate government”. But the call centre was swamped just after its launch with huge call rates and the presidency had to revise its ambitious goal of responding to queries in 36 hours. Then there was the embarrassment of journalists and opposition party members phoning in, not getting through and reporting on these failures.

Six months later a parliamentary delegation that included the ANC, Democratic Alliance, Congress of the People, Inkatha Freedom Party, United Democratic Movement, Freedom Front Plus and Pan-Africanist Congress went to visit the hotline call centre in Pretoria. A report by the DA’s Anchen Dreyer described the event as chaotic. “It was clear that the initial number of calls received overwhelmed the centre and they did not anticipate correctly the number of calls they would receive,” Dreyer wrote.

The report described a call centre that was overwhelmed, referred complaints to wrong departments or provinces and made follow-up difficult. “Despite the sophisticated technology in use, the Gigo [garbage in, garbage out] principle could also explain the low achievement rate of the hotline,” Dreyer wrote.

The figures were damning. Of the 674 864 calls received between September 2009 and February 2010, only 19 885 complaints were resolved. A further 484 327 calls were abandoned and the call rate dropped month on month, which Dreyer said signalled a loss of faith in the hotline.

Not so, said the DA. It queried how the service could have improved so remarkably in a matter of months when the earlier visit had shown that the hotline was “shambolic”. The opposition questioned the data’s credibility and asked for proof. It also wanted a statistical breakdown of hotline data to verify how many calls had been received, logged, dropped and resolved.

The parliamentary response showed that from September 2009 to December 31 the following year 1 038 374 calls were registered on the system as waiting; 547 886 calls were dropped; 490 448 calls reached a call centre agent; 70 576 calls were lost, mainly due to caller network failure or because they were prank calls; and 90 069 were logged. The number of resolved calls for that period was 55 857. No data was given for emails, letters or “walk-ins” to the centre.

The success rate depends on how you do the maths and ranges from between 5% or less to 62%, depending on what your definition of an incoming call is. Is it every call registered by the system, or only those that are successfully logged by agents?

The good — or bad — news, depending on your view, is that the government now claims a 79.47% call resolution. Presidential spokesperson Harold Maloka said that, until December 31 2011, a total number of 120 306 calls had been logged, of which 95 607 were resolved, realising the 4.47% resolution increase to 79.47%. “On average, the time taken to resolve matters is 67 working days,” said Maloka, adding that the top queries concerned employment, a place to live, dealing with the law, social benefits, citizenship, information from the government, electricity, education and training, water for household use and health services. The biggest number of calls came from KwaZulu-Natal, followed by Gauteng and the Eastern Cape.

The presidential hotline is outsourced to the State Information Technology Agency, which is the sole service provider. Anyone who has looked at the auditor general’s report on national audit outcomes for 2010/2011 will know that Sita was rapped over the knuckles for overspending or wasting the lion’s share of R463-million, along with a number of other public entities.

A turnaround strategy has been put in place for the beleaguered agency because it has not adequately fulfilled its mandate to the government and has been plagued by corruption.

Kotze is still awaiting a response.