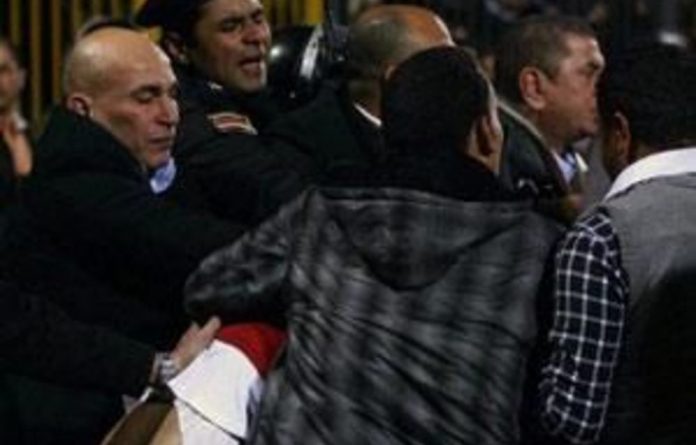 Clashes erupted in the Egyptian capital on Thursday between protesters and police, as the government scrambled to contain mounting anger over post-football match violence that killed 74 people.

Black-clad riot police fired tear gas at protesters trying to reach the interior ministry, furious at the lack of police intervention in Wednesday’s violence in the northern city of Port Said.

Injured protesters were ferried away by motorbike with medics saying around 20 people were suffering from tear gas inhalation.

Ambulances whizzed through the nearby Tahrir Square, epicenter of last year’s uprising that toppled Hosni Mubarak, towards the site of the clashes.

Wednesday’s deadly violence between fans of home team Al-Masry and Cairo’s Al-Ahly marked one of the deadliest incidents in football history and sent shares on the Cairo stock exchange plunging in Thursday trade.

Hundreds of Al-Ahly fans, wearing their team T-shirts and waving flags, were joined by other team supporters, activists and ordinary Egyptians on the march from their club headquarters towards the interior ministry via Tahrir Square.

“This was not a sports accident, this was a military massacre!” the crowds chanted, blaming the ruling military council for the violence.

Governor resigns
Prime Minister Kamal al-Ganzuri told an emergency session of Parliament on the tragedy that the Egyptian football association’s director and board had been sacked, as had Port Said’s security chief.

Ganzuri added that the Port Said governor had also resigned and this had been accepted.

However, furious MPs demanded the sacking of Interior Minister Mohammed Ibrahim who sat solemnly in the assembly, listening to accusations of negligence.

They said Al-Ahly supporters had taunted their Al-Masry counterparts throughout the match, but others said it was no more than the usual match banter between hard core fans.

State television ran footage of riot police standing rigidly in rows as pandemonium erupted around them.

National mourning
The interior minister has said most of the deaths were caused by the crush but medics said some people were stabbed.

The health ministry said 74 people were killed, including a police officer. Hundreds were reported wounded and police said 47 people were arrested.

Cairo stocks recovered some of their heavy losses on Thursday but still closed down 2.22%, with the main EGX-30 index reaching 4,584.39 points.

The clashes — blamed by the Muslim Brotherhood on Mubarak supporters — came as Egypt struggles with a wave of incidents related to poor security.

Al-Ahly’s most ardent supporters, the Ultras, were active in the revolt that overthrew Mubarak.

Politicians, fans and players took to social media to express their fury over the clashes, which cap a year of political upheaval and unrest.

“I won’t play football any more until these people get justice,” a furious Meteab said.

Egypt’s hated police, who recently came under fire for heavy-handed tactics, had been given instructions to deal carefully with protesters, sources said.

He stressed that security in Egypt was “fine.”

World football governing body Fifa on Thursday called for a full report on the violence.

“Fifa is in mourning and our thoughts are with the families of all those who lost their lives. Furthermore, FIFA has asked the Egyptian authorities for a full report on the incidents in order to evaluate what happened,” it said in a statement.

Sharp rise in crime
Its president, Sepp Blatter, on Wednesday expressed his shock over a “black day for football”.

The Confederation of African Football (CAF) said a minute’s silence will be observed at the Africa Cup of Nations this weekend in memory of those killed and hurt.

“African football is in a state of mourning,” said CAF president Issa Hayatou.

The Muslim Brotherhood, Egypt’s largest political force, accused Mubarak supporters of being behind the deadly violence.

“The events in Port Said are planned and are a message from the remnants of the former regime,” said MP Essam al-Erian in a statement on the Islamist group’s Freedom and Justice Party website.

“This tragedy is the result of negligence and the lack of army and police, and those running the country bear the responsibility.

“There are those who deliberately want to sow chaos in the country and place obstacles in front of the peaceful transfer of power.”

Since Mubarak’s ouster, Egypt has seen sporadic and sometimes deadly unrest coupled with a sharp rise in crime linked to the scarcity of police, who were heavily criticised for their crackdown on protesters during the uprising. — AFP