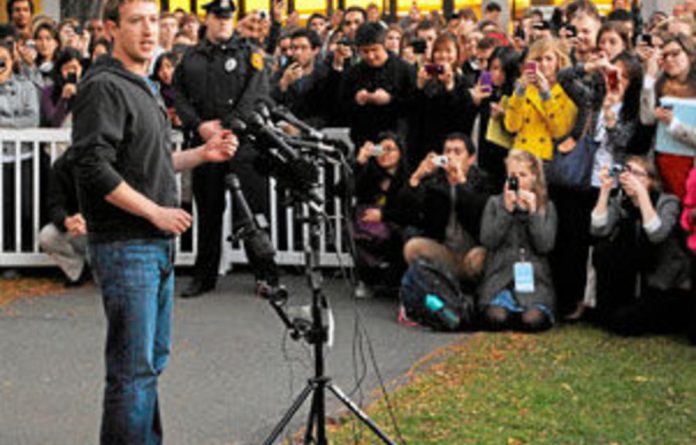 From Singapore to Silicon Valley, bankers, bloggers, stock-market traders and internet entrepreneurs are holding their breath.

Facebook’s record-breaking stock market listing, the largest ever for a technology company, is imminent.

Papers must be filed soon if Facebook wishes to press ahead with a May public offering. The world’s leading social site, with 800-million members worldwide, is expected to sell a 10% stake for between $7.5-billion and $10-billion, implying an overall value of $75-billion to $100-billion.

The multiples are on a par with Google when it joined the Nasdaq in 2004. By then Google’s engineering had allowed it to secure an unassailable position in search. Seven years on Google makes more than $10-billion a quarter and has a market capitalisation of $188-billion. Does Facebook have the same potential?

Most of the income will be from advertisers. WPP, the world’s biggest marketing services group, spends $200-million a year with Facebook, compared with $1.6-billion with Google. It is a vote of confidence, but WPP chief Sir Martin Sorrell has “fundamental doubts” about the extent to which social platforms can be monetised. “Facebook is a social medium, not an advertising one, like search or display. It certainly is one of the most powerful, if not the most powerful branding medium. It is, however, a word-of-mouth or public relations medium. You interrupt social conversations with commercial messages at your peril.”

Mark Zuckerberg was initially cautious about foisting advertising on his followers, to the extent that it led to a parting of ways with his co-founder and Harvard friend Eduardo Saverin. The commercial coyness is long gone and moves to monetise the audience with new forms of advertising have often provoked backlashes.

Facebook’s Beacon advertising system, which monitored members’ activity on partner websites and publicised these movements on their Facebook news feeds, so outraged users that it led to a class-action lawsuit. Beacon was shut down in 2009. Another legal claim began in California in December by users unhappy that if they clicked the “like” button on a company’s page, Facebook could use that member in an advert endorsing that company.

The experience of Myspace, Britain’s Bebo and Friends Reunited would suggest that these forums can be fads whose users are quickly drawn to other novelties.

And although the social network founded eight years ago in Zuckerberg’s Harvard dorm has soared in membership as rivals melted away, Google is biting at its heels. The search company recently pegged staff bonuses to the success of its social offering, Google+. The effect was dramatic. Membership rose to 90-million in January, having doubled in three months.

Facebook reaching saturation level
There are signs that Facebook is reaching saturation in its biggest markets. Monthly visitors in the United Kingdom fell 2.2% to 32-million from November to December, whereas United States visitors declined 2.1% to 166-million, said web measurement firm ComScore. Its world audience is still growing, adding 1.4-million visitors from November to December, and there is rapid growth in Brazil and India.

The deep level of penetration in small or remote nations such as the Falkland Islands (75%, according to research site Socialbakers) and Iceland (68%) suggests that, in some communities, Facebook has become not just a pastime but a social service, integrated into everyday life.

“For some users Facebook is the internet,” said ComScore European managing director Mike Read. He identified two trends that promised success for Zuckerberg. “Facebook’s user base is growing and the time people spend online individually is growing. Not only is the audience maturing, the way in which people use Facebook in a commercial sense is maturing.” Once membership stops growing, increasing the time each user spends on Facebook will be the measure of its success. In October 2010 the average user spent 4.5 hours a month on Facebook. This rose to 6.5 hours in December 2011.

If Facebook can imitate Google by becoming a landing page from which users access games, video, music or online shops, advertising should follow. It is already the largest internet display — as opposed to search — medium in Britain, with 18-billion adverts seen on the site in December, compared with four billion for its largest rival, Yahoo. But online display is embryonic compared with the millions once put into newspaper and magazine advertising.

After disappointing performances from games group Zynga and coupon network Groupon, Facebook may prefer to avoid a fall in the weeks after it goes public by pricing at the lower end of expectations. “Perhaps it is worth $100-billion, who knows?” said Sorrell. “[At one point], I thought $15-billion was too much. More fool me.” —

Australians would be stopped from posting local and international articles on Facebook and Instagram, the company said, claiming the move was "not our first choice" but the "only way to protect against an outcome that defies logic".
Read more
Africa

A study shows that the social messaging platform is both emancipatory and destructive, particularly during election campaigns
Read more
Coronavirus

‘Sweeties’ (cigarettes) for R150, and marching on Parliament — an insight into the social-media groups popping up to push back against lockdown regulations
Read more
Africa

Publications have cut salaries and frozen posts in a bid to survive the disease, but most owners failed to take appropriate steps when problems emerged in the late 1990s
Read more
World

Australia's new regulations will also cover the sharing of data, and the ranking and display of news content, to be enforced by binding dispute resolution mechanisms and penalties
Read more
Advertising
Continue to the category
Politics