Barclays puts the squeeze on Absa 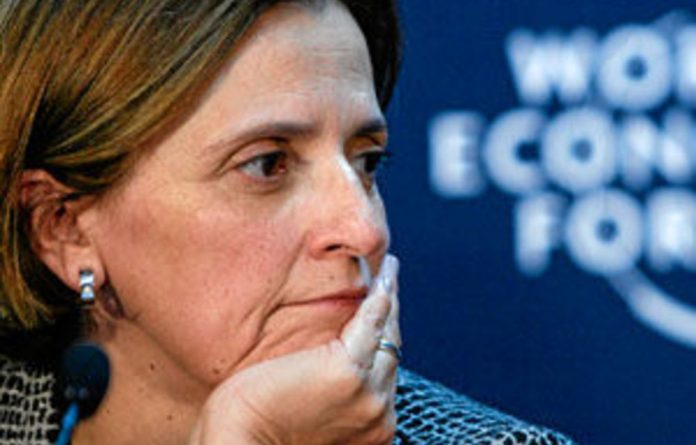 Absa group chief executive Maria Ramos is finding out the hard way what it is like to be bound to the bank’s global parent, Barclays, which is facing its own hardships.

When Ramos delivers Absa’s full year results next Friday she will boast an earnings increase of between 18% to 22% for the year ended December 2011, a positive sign for a bank that has been losing market in some areas such as mortgage lending.

At the same time, in London, Barclays’ group chief executive Bob Diamond will reiterate the tough global trading conditions and the stresses of the continuing regulatory and cost pressures of the British-headquartered bank. Barclays reported a 33% fall in pre-tax profits of £2.6-billion for the first six months of 2011 and the retrenchment of about 2 000 staff. It is likely to report some improvement, say analysts, but probably it will be marginal.

Although Barclays’s acquisition of 55.5% of Absa in 2005 was seen as expansionary and good for Absa, the global pressures of the parent have now filtered down into the local operations. During the past nine months, Ramos has had to take the knife to the South African structures and cut fat.

“This organisation is going to have to become more efficient and more effective, and I have to keep a close eye on costs while serving our customers better,” Ramos said this week.

Although she is not talking about retrenchments but rather about restructuring, there has been a significant number of staff leaving the bank because of unhappiness over regional departments being moved to and integrated with the Johannesburg city centre headquarters.

The restructuring has raised the ire of the bank union, Sasbo, although it said retrenchments were inevitable, but the exodus of the upper echelons of the bank over the past week has rattled the market and industry, and created uncertainty.

Three executive committee members leaving the bank
Last Friday Ramos announced that three executive committee members would be leaving the bank soon. Alfie Naidoo, the chief operating officer who has been at Absa for 10 years, would be leaving at the end of February to pursue personal interests outside the group and Happy Ntshingila, the chief marketing and communication officer, would be taking up “a new and exciting position” at MultiChoice. Daphne Motsepe, chief executive of unsecured lending, would be taking early retirement at the end of April this year and her portfolio has been folded into the retail and business bank, which is run by Bobby Malabie. Motsepe is in her early fifties and was appointed to the position two years ago.

Then, on Wednesday, Ramos broke the news that group deputy chief executive Louis von Zeuner, at his own request, would be relinquishing his executive powers at the end of the year to take up a non-executive role and serve on the boards of the Absa Group and some subsidiaries. This would allow him to take on non-executive positions outside the group.

Although Von Zeuner will devote 60% of his time to Absa and the Barclays Group from January next year, his departure is seen as the biggest blow to the bank. He has been with Absa for 32 years and was seen as the man behind the operational running of the bank. Absa’s share price fell 1.2% to R146.74 on the news of Von Zeuner’s decision to step down.

“It’s concerning that there’s been such a high turnover of the top people,” said a banks analyst who did not want to be named. “Louis was a wealth of knowledge and [had] a set of skills that will be very difficult to replace. This has rattled the market. Maria needs to do something to settle [the] ship and she will need to replace those skills to add more depth to the current management structure.”

Ramos was clear that none of the four executives would be replaced — instead their responsibilities will be folded into the portfolios of other executive members. “The deputy CEO [chief executive] position was something I created when I arrived and I have no intention of filling it. There is a competent and solid team running the various businesses who will take responsibility for those operations. That’s the way I’m running the business. This is how I have structured the business.”

Analysts said Ramos’s strategy to freeze the posts would probably result in a savings of about R20-million.

Von Zeuner will still play a strategic role: he will lead the group’s customer and citizenship initiative which Ramos said was key for Absa and Barclays. In addition, he will chair a newly established Africa customer committee and the Africa community investment committee, which are important areas of the business.

These are important responsibilities, especially as Diamond is looking to the Africa division, which was moved from Dubai back to Johannesburg in April last year under the leadership of Ramos, for growth and profits. Absa contributes about 20% to Barclays’s total group revenue, according to analysts.

One has to wonder then why Von Zeuner decided to step down from his executive position when he is still playing a leading role in driving the “one Africa” strategy.

Though Von Zeuner denied that he any intention of resigning fully or that his decision had anything do with what some in the bank described as Barclays’s “meddling”, Ramos said her deputy told her late last year that he would be leaving and she asked him to take the December holidays to think about an arrangement that could work for them. Ramos played down talk by both insiders and outsiders that Diamond’s interference in the local operations was causing unhappiness and low staff morale in the bank.

An insider said: “Diamond stood in the boardroom exactly a year ago in January and gave Maria and her team the rights order. He told them to fix the business and cut all the fat. There is a lot of unhappiness within the bank because of the restructuring. Retrenchments could be on the cards soon too. Barclays is calling the shots and Maria is under a lot of pressure.”

A banking executive said: “The latest resignations are quite a big development. Barclays is micromanaging. Maria has been asked to get rid of underperformers. It’s what Barclays is doing across its global operations as its profit margins are under threat.”

Barclays wants more of Absa
Barclays group CEO Bob Diamond wants to increase the UK-headquartered bank’s stake in Absa to up to 70% and rebrand the South African operation from red to blue, according to sources at both banks.

Barclays has a 55.5% shareholding, Absa’s empowerment partner Batho Bonke has 5.1% and the rest is held by other minorities. JSE rules require 20% of the shares to be free-floating.

Sources said Barclays wanted a bigger slice of the profits coming out Absa’s Africa operations. But the banks registrar, Rene van Wyk, who was unavailable for comment, might not like the idea of Barclays having more control because it could introduce systemic risk.

Economist Nouriel Roubini certainly sees high risk in Barclays. Late last year, Roubini, who gained fame for predicting the 2008 financial crisis, listed Barclays among large financial institutions such as Goldman Sachs and Morgan Stanley which “borrow billions through short-term loans and then use it to make long-term bets on risky assets that yield more money”.

The rebranding exercise is already starting to take shape on the Absa Capital and Absa Investments side, with staff in the process of being switched from an Absa employee number to a Barclays’ one.

Absa group chief executive Maria Ramos confirmed that some parts of Absa were being rebranded. “Barclays is a very well-known brand in Africa, so we’ve decided to brand … the Africa businesses Barclays [but] … Absa has a fantastic retail brand in South Africa, so the retail side will remain Absa-Barclays.” — Sharda Naidoo