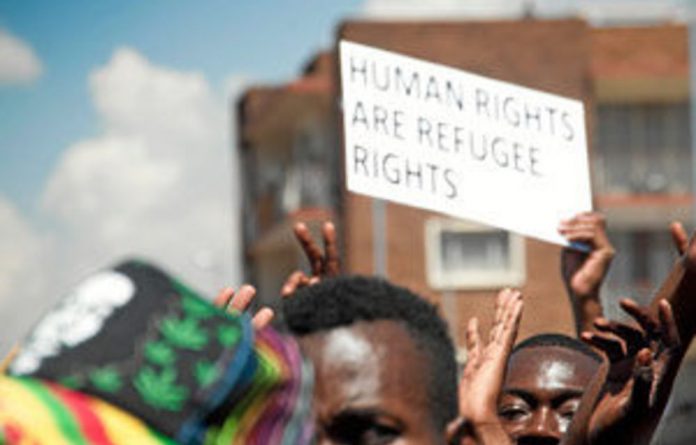 “That boy who stripped naked outside Luthuli House — it was a show of exasperation to say: ‘When you raped me before, you took off my clothes; now I’m taking off my clothes, so come on, keep raping me,'” said Gisumbu Mavu.

Mavu is explaining an incident — and a prevailing sentiment among exiled Congolese — that occurred during the protest by Congolese nationals outside the ANC’s headquarters in December in reaction to the South African government’s recognition of the Democratic Republic of Congo’s incumbent President Joseph Kabila following an election in November that many deemed fraudulent.

“There is exasperation because the democratic will of the Congolese people is still not being heard and that means the Congo continues to be raped,” said Mavu, who asked for his name to be changed for fear of victimisation by Kabila supporters and the South African police.

A teacher at one of Johannesburg’s top schools, Mavu is sitting in the popular Kin Malebo restaurant in Yeoville’s Rockey Street. It is a Saturday evening; there is football on the television and Congolese pop star Koffi Olomide’s love for women with rhythmic hips is being clearly transmitted through the speakers.

Yet Mavu’s quiet, clear analysis of the election in November and the ensuing protest in South Africa and around the world is unaffected by the cacophony.

The only interruption occurs when a community member comes up to him with money — anything from R50 to a few hundred — which goes towards the bail of 20 Congolese charged in Johannesburg with kidnapping, assault with intent to cause grievous bodily harm, public violence and malicious damage to property.

The bail collection follows a police swoop on Yeoville on January 19 during which, the authorities maintain, 150 Congolese men were arrested. Johan Kotze, the lawyer for those charged, suggested in the regional court in Johannesburg during their bail application hearing on Tuesday that it was an indiscriminate swoop netting more than 300 Congolese men. Kotze also suggested that it was driven by the political motives of a pro-Kabila strongman, Fabrice “King Zombi” Shungu, who laid many of the charges.

“If a proper investigation was done, certainly we would have had names in the statements and proper warrants of arrests could have been issued. Instead, the police are arresting hundreds of people,” Kotze said in court, drawing parallels with the actions of the apartheid police force.

During the bail hearing the investigating officer, Lieutenant Colonel Moses Raphalo, corroborated anecdotal evidence gathered by the Mail & Guardian from witnesses who said they had seen Shungu pointing out those to be arrested to the police during the raid.

Blanchard Kimuena (30), who works in the Pere Double Internet Café across the road from Kin Malebo, was one of those arrested and later released. He also remembered Shungu singling out individuals for arrest.

Said Kimuena: “If we asked why we were being arrested, we were beaten by the police. They took us to Hillbrow police station at about 6pm and we were kept there without any information from the police.”

According to Kimuena, the men were then divided into groups and his was driven around Johannesburg in the back of a truck from 11 that night until about 4.30am the next morning when they were returned to Hillbrow police station. There the group was contained in the open until about 7.30am, when they were finally allowed to sleep for a few hours in a cell.

“At about 3pm they started moving us 10 by 10 for an identity parade. We all had numbers and someone was identifying who would be released. I was eventually allowed to leave at about 7.30pm,” said Kimuena.

Quelling discontent
The word on the streets of Yeoville, a predominantly Congolese quarter of Johannesburg, is that Shungu is attempting to inveigle himself into the Kabila elite by quelling the discontent among Congolese communities in Johannesburg, Pretoria and Cape Town.

Shungu, the founder and president of Les Amis de Joseph Kabila Kabange (The Friends of Joseph Kabila Kabange), an organisation that facilitates meetings between South African business people who want to invest in the Democratic Republic of the Congo (DRC) and Congolese politicians, denied these allegations.

Shungu, who refers to himself as King Zombi, said that his motivation was to “bring peace to the Congolese in South Africa”.

“As king of the Bandundu [province and tribe], I am concerned about the problems my people are facing here. A king is only a king because of his people and I want to bring peace to the Congolese community in South Africa,” said Shungu.

Both Shungu and his spokesperson, Fiston Pelende, said that supporters of Étienne Tshisekedi, the leader of the opposition Union for Democracy and Social Progress (UDPS) — who many believe was the rightful winner of the country’s presidential election race — were intimidating and beating people in South Africa who supported Kabila.

But those who have protested outside Luthuli House and the DRC embassy in Pretoria against Kabila’s reinstatement as president say it is Shungu and his people who are trying to suppress their protest.

It is a protest that has swept the Congolese diaspora up in a wave of anger and mobilisation, from South Africa to Belgium and London, where protests were staged outside the South African embassy.

‘Sterling job’
Professor Georges Nzongola, the director of the African Governance Institute at the University of North Carolina, said this anger, especially against the South African government, was understandable, considering Defence Minister Lindiwe Sisulu’s comments that the DRC’s electoral commission, the Commission Electorale Nationale Indépendante, had done a “sterling job”.

These comments, said Nzongola, “were not only irresponsible, given the massive fraud that the commission is widely known to have engaged in, but also an indication of a bias in favour of the Kabila government”.

Nzongola criticised President Jacob Zuma’s administration for supporting the Kabila regime and its “usurpation of power” despite reports of widespread intimidation in the build-up to the DRC elections, election ballots being found on the streets of Johannesburg and the questionable partiality of several key actors in the election, including Ceni head Daniel Ngoy Mulunda.

In Yeoville’s drinking holes the talk among the Congolese is that South Africa’s lack of action over the electoral fraud is an extension of a historical approach to the Congo that has been influenced by selfish economic interest, from King Leopold II’s treatment of the area as a personal fiefdom and the United States propping up the dictatorship of Mobutu Sese Seko, to the November election and reinstatement of Kabila.

“If you eat an orange in Congo and throw away the seeds, you will have a tree in five years,” said Francis Mudibu, a mathematician at the University of the Witwatersrand. “We have fertile soil, minerals, everything except democracy and peace. It suits South Africa and America and other countries to have a destabilised Congo on its knees because it makes it easier for them to do business. What is worth R10 can be sold for R3 because there is no order or infrastructure.”

The Congolese diaspora’s hunger for a new approach to their country appears to have emboldened the protest. And the protest has gone viral. Ngwene Patshou, a journalist and filmmaker living in exile in Cape Town, said he left the DRC after the 2006 elections. He feared for his life after filming an alleged massacre of about 200 people by police in the Matade province.

Under the moniker “Emission Alerte” he has been posting videos of the South African protests and community meetings on YouTube to “connect the diaspora politically, but also to keep people back home informed about what is happening outside the Congo, because there is no free press there”.

Express support
Patshou has also posted videos of the so-called combattants assaulting people who they allege have been paid to express support for Kabila.

Patshou said these films “are sent to me, I am not involved in this action. I follow up with questions to the combattants and other people about why they are doing this and this usually gives an indication as to the anger and frustration of people in exile. I then post these videos online.”

The word combattants, according to Nzongola, was chosen by the Tshisekedi’s UDPS in the 1980s “to distinguish its followers from the ‘militants’ of the MPR [Popular Movement of the Revolution], Mobutu’s party. So UDPS supporters all over the world call themselves combattants.”

“But,” said Nzongola, “in the demonstrations that have taken place in many cities, particularly in Europe, all the participants are not UDPS members and there is no single organisation putting together these demonstrations. UDPS has no control over what is going on.”

Mavu, and others in Yeoville, agree with this assessment. In Yeoville there are ex-soldiers and angry young men who call themselves combattants, but not all support Tshisekedi.

Joseph “Lumumba” Mukedi, a combattant who was one of those involved in the court case, said “all Congolese in exile are combattants”.

Galvanising the community
People like Mavu, who has been working tirelessly to defend and release those arrested in the Yeoville swoop, say they are not specifically pro-Thisekedi but “pro-Congo and pro-democracy”.

“I was called a ‘collabo’ [collaborator] of the Kabila regime by the combatants, because they want to feel that you are on fire for the cause. But my style is different; I am an intellectual and a thinker and I am free to make my own opinion. I think they started to understand this because of the arrests and the court case and the work I have done,” said Mavu, who subscribes to the philosophy of Martin Luther King Jr and quotes writers Ayi Kwei Armah and Chinua Achebe liberally in his analysis of the Congo situation.

Combatants or non-combatants, the police swoop on the Congolese community and the subsequent charges against 20 of them appear to have galvanised the Yeoville community.

Kin Malebo was alive with celebration on Wednesday night following the release of 10 of the 17 who were granted bail (the community was still raising funds to release the remainder at the time of going to press).

Alternating between a huge grin and the occasional tears when clasping one of those released, Mavu fell back on a French saying: “A toute chose malheur est bon (Any bad event is worth it).”