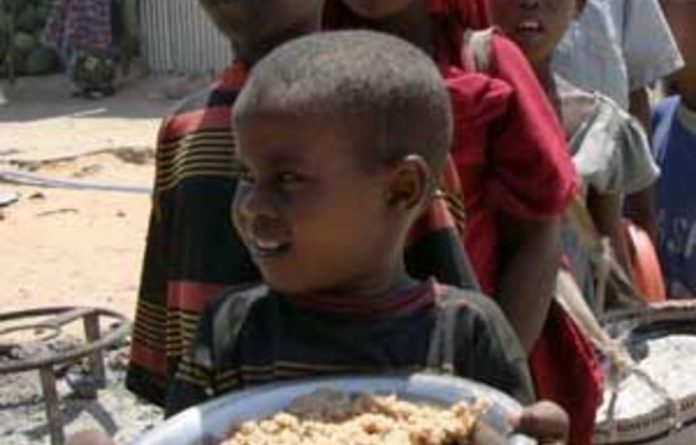 The United Nations says that Somalia’s famine is over, but the world body’s Food and Agricultural Organisation (FAO) warned that continued assistance is needed to stop the region from slipping back. The world body moved the crisis from the top step of a five-point scale — based on the death rate — to the fourth step on Friday, formally reducing it from a “famine” to a “humanitarian emergency”.

However, the UN said that 2.3-million people remain in a food crisis situation in Somalia and still need assistance. That represents 31% of the country’s population. Across the Horn of Africa region the total is 9.5-million who need help.

The international body declared famine in Somalia last July after successive failed rains. Hundreds of thousands of Somalis fled to refugee camps in Kenya, Ethiopia and the Somali capital Mogadishu in search of food.

The famine was exacerbated by the Somali militant group al-Shabab, which has let few aid agencies into the area it controls in south-central Mogadishu.

Jose Graziano da Silva, the director general of FAO, warned that without assistance in the region over the next three months “those people will not survive.”

“The Horn of Africa will be for FAO the most important region and we’ll be doing our best here to improve food security,” he said. “We do believe it is possible to have a Horn of Africa free of hunger.”

Mark Bowden, the UN’s humanitarian c-ordinator for Somalia, said that a massive increase in assistance last year helped lift Somalia out of famine conditions. But he said the international community needed to keep helping. “The gains are considerable but they are also very fragile and one of the things I want to highlight is we have a temporary respite in terms of addressing the crisis in Somalia,” Bowden said.

He later added: “The years of conflict and poor rains have left millions of Somalis vulnerable. The mortality rates in southern Somalia are still among the highest in the world.”

Dismay
The announcement that the famine had ended was greeted with incredulity and dismay by refugees in Mogadishu.

Fadumo Samow, a refugee at Badbado camp, said reports that the famine was over were “far from the truth.”

Ahmedey Bashir, a father of five, said he feared the announcement would stop famine victims from getting aid.

“The famine is almost over but we are desperately dependent on the food aid,” he said. “… If they stop it we will be back to it again. Our children are now better than before, but we ask the United Nations still to help us.”

The militant group al-Shabab this week banned the international Red Cross from operating in southern Somalia. Bowden said any reduction in assistance “is of critical concern to us,” and he urged all sides of the conflict not to impede humanitarian aid.

The UN does not have a death toll from Somalia’s famine and will say only that it knows tens of thousands of people died, mostly between April and September last year. A study will be commissioned to look at the death toll in more detail, one UN official said Friday.

Senait Gebregziabher, the head of Oxfam in Somalia, lauded the gains against hunger but said that Somalia “is still in the throes of its worst humanitarian crisis in decades” and said that insecurity is disrupting aid supplies, warning the world not to turn its back on the crisis.

“We are seriously concerned that if people do not have the security to tend their crops and animals, or the freedom to access clean water and food in the markets, the humanitarian situation will deteriorate once again,” Gebregziabher said.

Famine
After months without rainfall across the region, the UN on July 20 declared several parts of Somalia a famine zone. Exhausted, rail-thin women were stumbling into refugee camps in Kenya and Ethiopia with dead babies and bleeding feet. The journeys sometimes took weeks, and weaker family members — children and the elderly — were left behind on the way to die alone.

The UN expanded Somalia’s famine zone a couple of weeks later, defined as when two adults or four children per 10 000 people die of hunger each day and a third of children are acutely malnourished. Aid groups quickly sent in planes and boats full of food, though a critical report written by two prominent aid agencies has found that government and aid groups were much too slow to respond despite early warnings of impending disaster.

The crisis was the worst since 1991-92, when hundreds of thousands of Somalis starved to death. This time, the British government estimates that between 50 000 and 100 000 people died, most of them children. Kenya, Ethiopia and Djibouti were all badly affected, but the famine hit hardest in areas of Somalia suffering from a toxic mixture of drought, war, high taxes levied by armed groups, and rising food prices. — AP