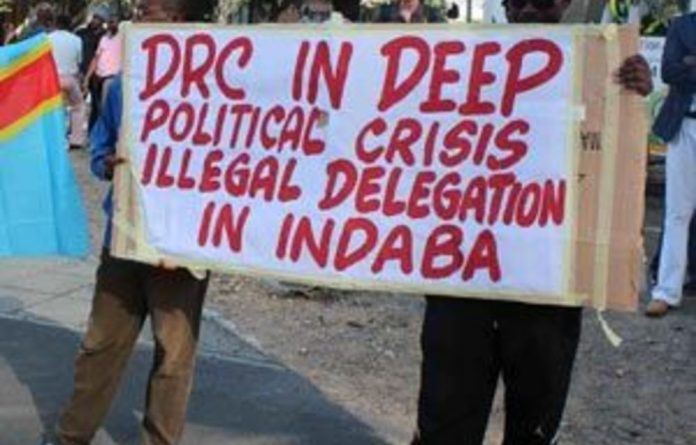 Congolese protesters opposed to the DRC’s Joseph Kabila are picketing on the sidelines of the Mining Indaba in Cape Town, calling on investors to steer clear of the country’s mineral resources.

Congolese protesters who dispute the recent re-election of Joseph Kabila as president of the Democratic Republic of the Congo (DRC) picketed on the sidelines of the Mining Indaba in Cape Town on Wednesday, calling on investors to steer clear of the country’s mineral resources.

They also claimed that South Africa had only endorsed Kabila’s re-election because prominent South Africans had business interests in the countries’ mining sector.

Chanting in French and Kikongo, approximately 30 protesters cradled placards and the DRC’s flags while they toyi-toyi’d along Coen Steytler avenue outside the Cape Town International Convention Centre.

“Kabila is a killer and rapist”; “Help save the DRC”; and “DRC in deep political crisis — Illegal delegation as Indaba,” read some of the placards.

The protests form part of a larger campaign by DRC citizens residing in South Africa who believe the presidential elections in December were illegitimate and fixed in favour of incumbent president Joseph Kabila.

Most of those protesting outside the Indaba say opposition leader Etienne Tshisekedi is the rightful leader of the country and was defeated by Kabila only “through fraud”.

As part of their remonstrations, the protesters are encouraging investors to steer clear of the country’s mineral sector, which they believe is “tainted”.

“Hey! Please don’t invest in the DRC — you are supporting a murderer and a rapist and buying blood diamonds — don’t do it,” shouted one Protester to a bemused looking delegate as he exited the Indaba.

Besides diamonds, other primary minerals mined in the country include cobalt, gold and copper.

‘Zuma and his cronies have mines in the DRC’
Ikotela alleges the support from the South African government is solely based on business interests in the DRC, held by prominent South African politicians.

“Your President Zuma and his cronies have mines up in DRC, that’s why you are supporting Kabila,” he told the M&G.

Presidential spokesperson Mac Maharaj dismissed claims of Zuma’s business concerns in the DRC as “far-fetched” and would not comment any further on the matter.

Emergency number
In response to the protests, the DRC’s minerals and energy delegation at the Indaba have set up an emergency number for the country’s representatives to contact should picketers threaten them.

“They have been a little aggressive but nothing too hectic. If I think it is bad I will use the number,” Alessaine Kwatanga, a businessman in Lubumbashi told the M&G.

Indaba organisers have described the protests as “unfortunate” but say they recognise the rights of DRC citizens to protest against their government and leaders.

“The right to peaceful protest is enshrined in the South African Constitution. The Mining Indaba would like to apologise to our delegates and anyone who might have been inconvenienced,” read a statement released on Wednesday.