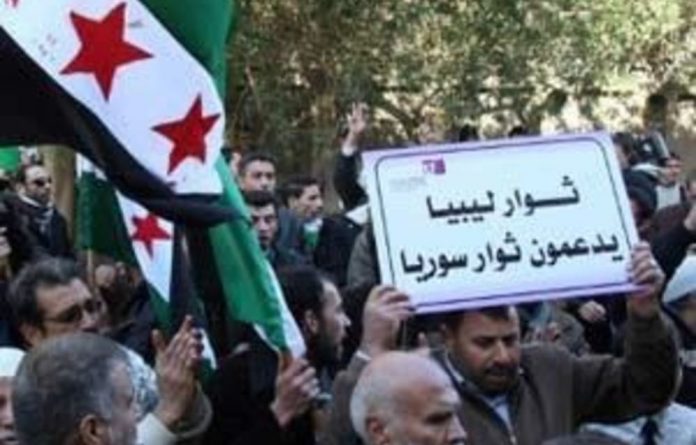 Dozens of civilians were killed on Wednesday as government troops pressed a relentless assault on the flashpoint Syrian city of Homs for a fifth straight day, flattening many buildings, activists said.

The Syrian Observatory for Human Rights said the deaths were caused by shelling and gunfire from Syrian forces and added that three entire families were also killed overnight in the central city by regime-backed thugs, known as Shabiha.

“We expect the death toll to rise … given the fact that many victims remain under the rubble,” Rami Abdel Rahman, head of the Britain-based group, said.

Activists said the most intense shelling appeared to be in the neighbourhood of Baba Amr, where buildings in some areas were completely flattened and all power and communications were cut off.

“Since dawn the shelling has been extremely intense and they are using rockets and mortars,” said Omar Shaker, an activist in the besieged city reached by satellite phone from Beirut.

“They have destroyed all infrastructure and bombed water tanks and electricity poles,” he added. “The humanitarian situation is extremely dire and food is lacking.

“We are trying to set up a field hospital but we have no medical supplies.”

Intense shelling
He said at least 40% of buildings in Baba Amr had been hit.

Shaker said it was clear the intense shelling was aimed at paving the way for a ground assault.

“The shelling right now is from far away which means troops are not moving on the ground,” he said. “When the shelling eases it means they are moving.”

The observatory said that apart from Baba Amr the shelling was also targeting the Khaldiyeh, Bayada, Karm el-Zeytoun and Wadi Iran neighbourhoods.

The three families killed were in the Assabil and Nazihin neighbourhoods.

The observatory has reported several hundred civilians killed since the onslaught was launched overnight on Friday.

Activists say more than 6 000 people have died in Syria since the outbreak of a popular revolt last March against Assad.

‘Syrians must decide own fate’
Russian Foreign Minister Sergei Lavrov, who returned from talks with Syrian President Bashar al-Assad in Damascus, said on Wednesday that Syrians themselves should decide the fate of their leader.

“Any outcome of national dialogue should become the result of agreement between the Syrians themselves and should be acceptable to all the Syrians,” Lavrov told reporters, sidestepping a direct question from a reporter about Assad’s fate.

Beijing rejected accusations by Britain’s foreign secretary, William Hague, that China had let the Syrian people down by vetoing a UN resolution condemning a bloody crackdown in the country.

China and Russia both came under a barrage of criticism for blocking the UN Security Council resolution on Saturday with Washington calling their rejection a “travesty” and the Syrian opposition saying they had handed Assad’s regime a “licence to kill”.

Hague said their action would only encourage further bloodshed in Syria and accused Beijing and Russia of siding with the Syrian regime “in support of their own national interests”.

Halt violence, says China
“Their approach lets the Syrian people down and will only encourage President Assad’s brutal regime to increase the killing, as it has done in Homs over the past 24 hours,” Hague said in a strongly worded statement on Saturday.

China’s foreign ministry — which has repeatedly defended Beijing’s decision and called on both sides in the conflict to halt violence — said Hague’s comments were “extremely irresponsible” and had “ulterior motives”.

“China’s action is righteous and fair and any efforts to stoke discord in China-Arab relations will be in vain,” foreign ministry spokesperson Liu Weimin told a regular media briefing.

“China is the friend of all Syrian people. China is always mindful of maintaining the long-term interests of the Syrian people and maintaining peace and stability of Syria and the region.” — AFP, Reuters, Sapa