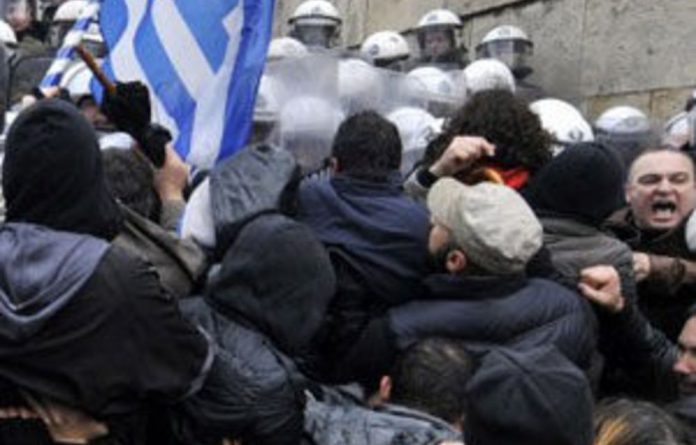 The three coalition partners (European Union, International Monetary Fund, European Central Bank) participating in talks on a rescue plan for the debt-strapped Greek economy agreed on all “points of the plan except one”, according to Papademos’ office.

But the Greek leader was hopeful a deal could be hammered out before Eurogroup finance ministers convene in Brussels on Thursday evening.

The single remaining sticking point is “the reduction of pensions,” a government source said after the marathon coalition talks which began Monday and broke up in the early hours of Thursday.

Greece’s politicians must reach a deal before their country can receive the next slice of a multi-billion euro bailout from the EU and IMF.

The bailout is vital to prevent Greece, a eurozone member, from defaulting on €14.5-billion of payments to bond holders due on March 20.

All eyes are on Greece amid fears a failure to meet its debt obligations could spark a domino effect that undermines the euro common currency project.

According to the Greek press, the measures under consideration included slashing the minimum wage by 22%, sweeping cuts to salaries and pensions and 15 000 public sector job losses.

Far-right leader Georgios Karatzaferis was the first to emerge from the coalition talks, denouncing the troika for heaping unreasonable pressure on the Greek government to enact more painful cuts to public spending.

“I made clear my intentions right at the start of the meeting. I cannot in one hour sign up to a plan which will affect the country for 40 or 50 years with receiving [legal] assurances that the measures are going to get the country out of its impasse,” he told reporters.

According to Papademos’ office, “Mr Karatzaferis expressed numerous reservations” about the plan.

Conservative leader Antonis Samaras stressed that “talks will continue on the question of pensions”.

Stuck on pensions
“At this difficult moment, we must take care of retirees,” he said.

Private creditors, who are negotiating a write-off of Greek debts worth at least €100-billion, are to meet on Thursday in Paris, according to a spokesperson.

Greece has run up total debt of about €350-billion, roughly 160% of its gross domestic product and the IMF has insisted that level be brought down to a maximum of 120% of GDP in 2020.

If the Greek parties do manage to overcome their differences, the new programme of reforms will be put before the national Parliament on Friday, ahead of a vote on Sunday, with the government coalition in theory able to rely on support from 255 of the 300 deputies.

The consequences of the austerity measures would be heavily felt in Greece where many families are already feeling the pinch from earlier austerity packages.

Unions have called for protests to be held late on Thursday, two days after a general strike.

The political stakes are also high as the parties prepare for early legislative elections in April. — AFP