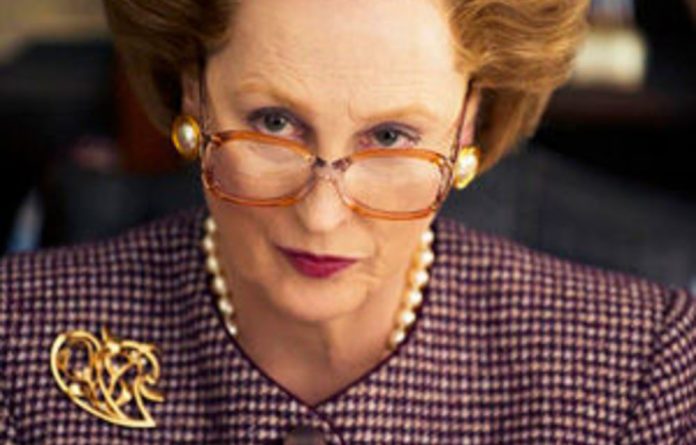 Daringly, in The Iron Lady, screenwriter Abi Morgan and director Phyllida Lloyd have made a movie about Baroness Thatcher’s flashback-riddled dementia while their subject is still alive. Britain’s most important and controversial postwar prime minister has been recast (rather like Judi Dench’s Iris Murdoch 10 years ago) into a bewildered old lady cherished in dramatic terms for her poignant vulnerability and decline, rather than for the mature achievements of her pomp. (And, like the screen Iris, she is paired off with kindly Jim Broadbent.)

Margaret is played with cunning and gusto by Meryl Streep, and it is a pious critical convention to praise performances like these on the grounds that they go beyond mere impersonation. I’m not entirely certain that Streep does go beyond mere impersonation, but also not certain that there is anything “mere” about it in any case. Technically brilliant mimicking of this standard is much rarer than run-of-the-mill good acting.

The Meryl Maggie is a very enjoyable and effective turn, effusively and rightly praised.

Losing touch
Thatcher is here an elderly, lonely widow, being kept under virtual house arrest at a grand London address. She has secretaries and assistants who maintain a light schedule of appearances and photo ops. At a dinner party she is heard to deride coalitions, yet refers affectionately to the current prime minister as a “bit of a smoothie” — a nice touch.

She is attended to by her harassed daughter, Carol (Olivia Colman), but chiefly worries about when and whether to throw away suits belonging to her late husband Denis, who appears to her when she is alone, a cheerful dream-ghost played by Broadbent, Philip to her Elizabeth, telling her to buck up.

News of a terrorist bomb blast in South Asia triggers memories of the IRA’s 1984 Brighton Grand Hotel attack, and Margaret finds herself carried back into the past: her arrival in the Commons (played as a young woman by Alexandra Roach), becoming Tory leader, the 1979 victory, the Falkands, the miners’ strike, the Ronald Reagan love-in (very brief, this), the City boom and finally the inevitable 1990 leadership crisis. Thatcher’s fear of being “swamped by an alien culture” is very much not mentioned, and neither is her less-than-enthusiastic attitude to Nelson Mandela.

Basically, this is a defanged, declawed, depoliticised Thatcher, whom we are invited to admire on the feeble grounds that she is tougher and gutsier than the men. Yet on the rare occasions when the film does allow her to become nastily political, this Thatcher comes alive.

Black and white
At the dinner party, she is asked for her opinion on the current terrorist attacks; after pausing long enough to let the guests squirm with embarrassment, she swims back into focus with a potently non-PC speech about how evil has never been more patient or more avid, and that “Western civilisation” must keep up the battle. No balanced pieties about freedom and democracy, just a cool insistence on evil on the one hand and Western civilisation on the other.

At the same party, one of the Tory guests literally kneels before the seated Thatcher to say how much she admires her. The guest is glowing with what Alan Clark called the Führerkontakt — the thrill of being in the leader’s presence. There is little actual Kontakt in this film; it’s too benign and celebratory. But The Iron Lady finds a note of distress and self-pity, loneliness and anxiety. Streep has done more for Thatcher than any spin doctor. —