Speak up before you are gagged 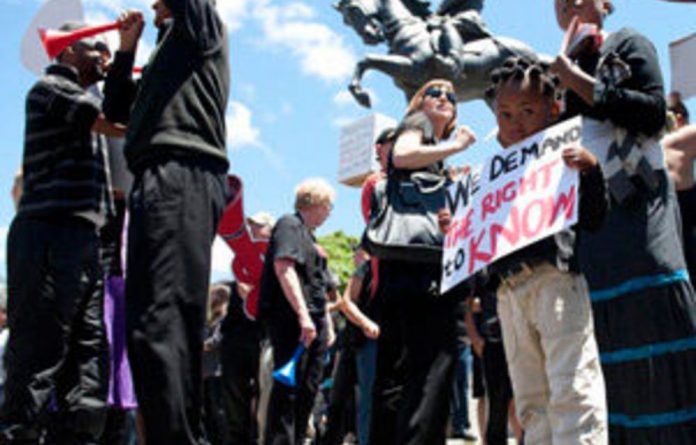 All concerned citizens should take part in the second and final phase of public participation hearings on the Protection of State Information or "secrecy" Bill. It is your last chance to make your voice heard.

Obfuscation, ideological deflection, secrets and all power to the spooks — that is what the Bill means in democratic South Africa. The basic democratic principle being ignored is that the public's right to know outweighs the possible danger the disclosure of information could pose to national security.

We are slap bang in the middle of the National Council of Provinces public consultation process and must bear in mind that the enactment of the secrecy Bill without an acknowledgement of this basic democratic principle will signify a break from the values of openness, transparency and accountability as well as the culture of justification before exercising power, all of which are entrenched in the Constitution.

The Bill has to be passed by the council before it can proceed to the president for his signature and then be gazetted. There is some hope that public participation hearings present an opportunity for amendments to be made to align the Bill with the progressive values of the Constitution.

The chairperson of the council committee, Raseriti Tau, said at the end of last year it would not rubber-stamp the National Assembly's decision. He intimated that the outcomes were wide open.

The public participation hearings have delivered some surprises. For the ANC it must have been disappointing that its officials promoting the Bill got a severe roasting two weeks ago in Cape Town's Gugulethu and Thembalethu townships.

Members of the public grilled the officials and stated their feelings in no uncertain terms: the Bill was a cover for the failure of service delivery and a transparent attempt to hide activities such as corruption.

New tactics
Forewarned by this attack, the ANC in the Eastern Cape bused in supporters last week and Tau tried a new tactic. He turned off the microphone every time anyone said "secrecy Bill". He also apparently told people not to mention service delivery but to the stick to the issue.

Reports from attendees at the Eastern Cape hearings said many people questioned why the government was prioritising the Bill at this time.

Given this mixed bag, something astonishing then transpired. Parliament issued a statement saying "2 February 2012: Bill gets resounding approval". A careful reading of the statement does not explain why the hearings so far were considered to be a "resounding" success. The statement says only that "the hall" was packed to capacity and more chairs had to be brought in.

Hearings in Mangaung this week were marred by booing and arguments. The meeting's chair reportedly told attendees not to bring "political party concerns" in to public hearings on the Bill.

The Right2Know campaign has made other findings. Many people do not know the implications of the Bill, but when they do they state unequivocally that they want less secrecy in society, not more. They want a free flow of information so that they can make informed decisions about their lives.

In summary, here are some of the serious problems with the Bill: it goes far beyond what is reasonable to protect national security; it shields the intelligence agencies from scrutiny; it hands over more power to intelligence and security clusters; the state security minister can decide whether any organ of the state should be protected from the public and the media; and whistle-blowers and journalists could become "enemies of the state" and face jail time. Their sentences would be severe — not just a few days or weeks but many years. It is a terrible shoot-the-messenger phenomenon.

Some advice
Some advice for promoters of the secrecy Bill: secrets have a way of creeping out. Tackle service delivery, poverty and unemployment and deal decisively with crooks defrauding the state. Stop tenderpreneurs and we will not have financial disasters such as that in Limpopo. Do not waste precious time and money on creating a veil of secrecy.

Supporters of the principles in the Constitution do not want the Bill — certainly not in its current form. It allows obfuscation, deflection and hiding from real issues such as service delivery. It will impede investigations into corruption and fraud and, of course, stem the free flow of information.

Finally, some advice to the citizenry: attend the hearings and make your voices heard, or make a written submission to Parliament. Do not be pathetic afterwards and say: "I didn't know."

* Glenda Daniels serves on the Right2Know national working group. She writes here in her personal capacity.

Written submissions can be sent to the committee secretary, G Dixon, at [email protected] until 12pm on February 17.

Parties have a duty to reveal their donors

Civil society has fought against the worst of the breaches — securitisation, corruption, secrecy
Read more
Advertising