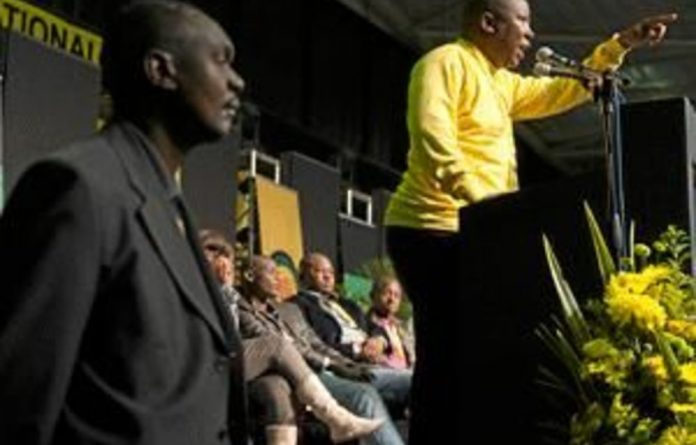 It claimed that engineer Lesiba Gwangwa was at the centre of the scheme. Gwangwa was Malema’s business partner and the sole director of On-Point and SGL Engineering Projects. The two companies were previously or currently owned by Malema and his Ratang Family Trust.

Both companies have scored at least R400-million worth of Limpopo municipal tenders since 2007.

The companies are being investigated for tender fraud and corruption by the SA Revenue Service, public protector Thuli Madonsela and the elite investigating unit, the Hawks.

The national government stepped in and placed five departments in Limpopo under administration last month after tender fraud brought the province to the brink of collapse.

Madonsela has ordered the provincial roads department to suspend On-Point’s participation in the tender awarding process.

She is apparently looking into how Gwangwa allegedly forced contractors to sign secret back-to-back agreements which entitled his company to a share of the proceeds of the tenders it awarded.

According to analysts quoted by the newspaper, President Jacob Zuma was aware of what was happening in Limpopo, but was allowing the investigation to take its course rather than recalling the province’s political leaders.

Political analyst Somadoda Fikeni told the newspaper that the ANC leadership would rather let the investigation expose links between the leadership in Limpopo and the tender irregularities.

“In that manner it would be seen as a technical administrative process that deals with governance and corruption issues without being seen as politically manoeuvred.”

Malema has been suspended for five years by the ANC’s national disciplinary committee.

Last week, he was given a 14-day reprieve to argue for a lesser sentence after his appeal to have his suspension overturned failed.

He and his executive were found guilty of provoking serious divisions within the ruling party and bringing it into disrepute, partly for threatening to send a team to Botswana to consolidate local opposition parties and help bring about regime change.

The Sunday Times reported that Malema was losing support within his own national executive committee, with some leaders telling him to accept the ANC’s decision to suspend him.

However, Malema’s backers apparently plan to leave the remaining officials as they are, rather than electing a new president.

This would allow Malema’s deputy Ronald Lamola to act as president until the next ANCYL conference.

Lamola would be expected to continue campaigning for former ANCYL president Fikile Mbalula to replace Mantashe, according to the weekly.

Provinces such as the Eastern Cape and Mpumalanga have publicly given their support for the leadership of the league under Malema and have suggested that if he is suspended he will remain president until the next congress, in 2014.

The youth league believes it is being targeted because it supports Deputy President Kgalema Motlanthe and ANC head of campaigns Fikile Mbalula to replace President Jacob Zuma and ANC secretary general Gwede Mantashe as president and secretary general, respectively, in Mangaung in December.

On Friday, Motlanthe also called for a political solution to the league disciplinary woes. Speaking at the league’s lekgotla, being held in Centurion this weekend, Motlanthe said “There is no need that at any given point the relations between the ANC Youth League and the mother body should be fractured.”

Using the example of a landlord who attempts to evict people who are living rent-free on his land, Motlanthe told the league that the ANC cannot remove its leadership without first providing them with alternatives.

He warned that although the league was entitled to having its own policies and resolutions, these need to be aligned with the constitutional policies of the ANC. “If they are not, you must immediately start engagement with the ANC,” he said, adding that this should be done directly with the party and not through the media.

‘Becoming class conscious’
The deputy president suggested that the league identify key strategic tasks so that the movement is focused and effective and called on them to keep pushing the frontiers of change while remaining open to new ideas.

He emphasised the importance of political education in understanding the place of the league in the ANC and in South Africa. “Wearing a red shirt with Che Guevara’s face on it doesn’t make you class conscious,” he told delegates.

Motlanthe also warned the league should guard against being “intoxicated by past victories” and urged them to work hard and be more organised if it wanted to effect change. “Change is a function of struggle. It means a lot of hard work. And if you are not organised, you will not change society,” he said. – Sapa and Staff reporter