Bits from here, pieces from there 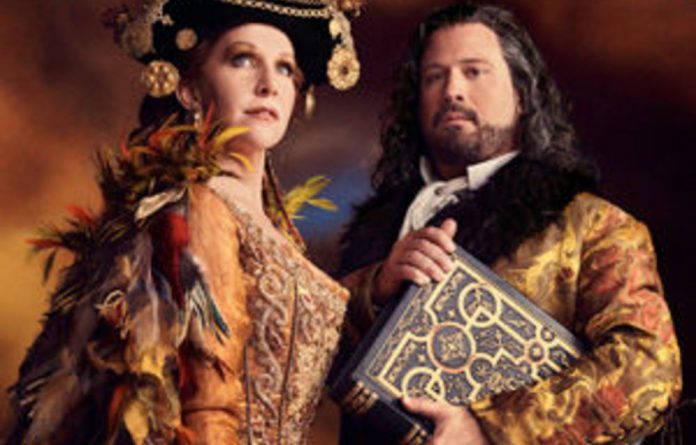 The Enchanted Island, the Metropolitan Opera’s New Year’s Eve spectacular, is an old/new opera: a mix of music by Handel, Rameau and Vivaldi with a very witty libretto written by composer Jeremy Sams. It is currently on at Cinema Nouveaus in major centres as part of the Met’s Live in HD series.

The story is based on The Tempest, with characters and a bit of plot from A Midsummer Night’s Dream “bumping into” the story, as coloratura soprano Danielle de Niese, who plays the spirit Ariel, puts it in an interval interview.

The collision enabled De Niese, in developing Ariel, to “channel Puck and a bit of Tinker Bell”.

She is such a delight that in Act I, where she is on stage much of the time, one almost forgives the convention that every singer gets an aria, and some get several.

The setup
The opera begins by following the play. Prospero — exiled to the island, grousing among his books and potions — promises Ariel her freedom if she can create a storm to bring a ship bearing Prince Ferdinand to the island; he sees Ferdinand as a perfect match for his daughter, Miranda.

Then it all goes wonderfully off course. Ariel wrecks the wrong ship, which bears the four Athenian lovers — now married and on their honeymoons — from Midsummer Night’s Dream. What ensues is farce, with Ariel sprinkling love potions on the wrong young men, who promptly fall in love with Miranda — and she with them.

Meanwhile the sorceress Sycorax, only referred to in passing in The Tempest but here a central character, casts a spell on the castaway Helena, so that she will fall in love with Sycorax’s son, Caliban.

And that’s only Act I.

Fitting it all in
The idea, says Sams, came from Met general manager Peter Gelb, who wanted to present the gems of a century of music; and setting these gems in an opera that mixes two Shakespearean plays makes a pastiche of both music and plot. It makes perfect sense in a Baroque sort of way; in that era, composers would cut and paste bits of their existing operas into new ones.

Baroque music aficionados may be able to identify more than a few of the pieces and where, for example, a few phrases by Handel segue into an aria set to music by Rameau. Here are a few indications, pointed out by the New York Times‘s Anthony Tommasini: Prospero’s first aria comes from a Vivadi cantata, and Ariel’s response is from Handel’s oratorio Il Trionfo del Tempo e del Disinganno; Sycorax’s revenge aria is from Handel’s Teseo.

That Sams and the Met have succeeded in their aim of creating a Baroque pastiche is clear, but perhaps they have succeeded too well. The Enchanted Island is a perfect Baroque opera, with all the irritations that might hold for many 21st-century viewers. Primary among them is the convention that requires “static display arias where any action stops dead and the singer expounds, at length and with the repetitions standard to what was called da capo form, on a single emotion — love, fear, anger, or whatever”, as aptly set out by Michael White and Elaine Henderson in Opera & Operetta (Collins).

Variations and ornaments — and there were plenty — are added by the singer to a bare but beautiful line.

Contemporary concerns
Baroque operas featured castrati, but fortunately, we’ve moved on; instead we have countertenors. The Enchanted Island has two: David Daniels, who sings Prospero, and Anthony Roth Costanzo, who is Ferdinand.

Sams has updated his script for 21st-century concerns. When Ariel says she wants to be free to swim with Neptune’s dolphins, the god Neptune — a marvellous Placido Domingo — says “If you can find them” and bemoans how humans have despoiled his oceans. And Joyce DiDonato’s Sycorax is Everywoman — loved, then discarded and scorned, but now, in middle age, once again finding the strength and power she had in her youth.

As usual in Met productions, the voices are magnificent and the set is both sumptuous and quirky. The direction and production design, by the inventive team of Phelim McDermott and Julian Crouch, are first-rate, as they were in Satyagraha earlier in the season.

There is quite a lot of humour in Act I, mostly pathos in Act II, and at nearly four hours (with a 35-minute interval) the opera is much longer than it needs to be — but then so are most operas. The form was developed centuries before exposure to television and the internet cut the attention span of audiences to a couple of hours, at best — and traditionally, opera audiences wanted their money’s worth.

The Enchanted Island will be shown at Cinema Nouveaus until Friday, February 17. Next up in the Met opera series: Wagner’s Götterdämmerung, opening on March 2.

Laws may allow abortion, but it’s much harder to change attitudes

Chill to opera and theatre

Movie teaches teens how to budget

Walking the dog in Bellevue