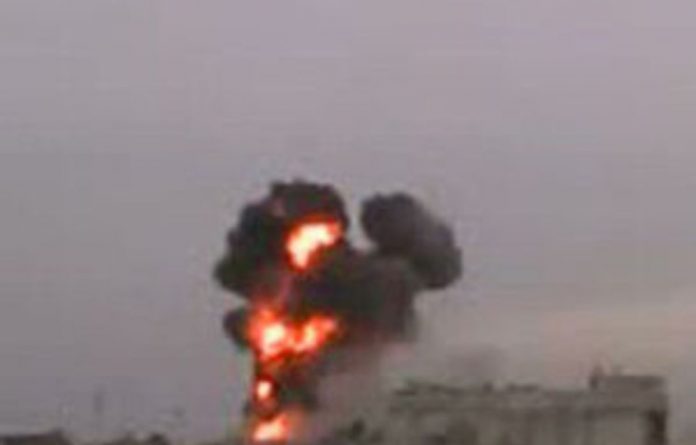 Syrian government forces attacked opponents of President Bashar al-Assad on several fronts on Tuesday, sending residents fleeing from one town near the capital and bombarding the city of Homs for an 11th day running, activists said.

Citizens of Homs — Syria’s third largest city with one million people — faced a humanitarian crisis. Food and fuel were scarce and most shops shut due to relentless shelling and rocket fire that have trapped people in their homes.

With Assad seemingly oblivious to international condemnation of the tactics employed to crush the uprising against his 11-year rule, Arab countries led by Saudi Arabia pushed for a new resolution at the UN supporting their peace plan.

The redoubled diplomatic effort came as the UN human rights chief chastised the Security Council for failing to act on Syria, saying Assad had been emboldened by its failure to condemn him.

“I am particularly appalled by the ongoing onslaught on Homs … According to credible accounts, the Syrian army has shelled densely populated neighbourhoods of Homs in what appears to be an indiscriminate attack on civilian areas,” UN High Commissioner for Human Rights Navi Pillay said in a speech to the General Assembly in New York on Monday.

The Russian and Iranian-backed Assad, whose Alawite-minority family has ruled the mainly Sunni Muslim country for 42 years, is struggling to put down street demonstrations and stop insurgent attacks across the country.

He dismisses his opponents as terrorists backed by enemy nations in a regional power-play and says he will introduce reforms on his own terms.

Heavy shelling
Conflict flared anew on Tuesday morning in Rankous, a country town near the capital Damascus that was hit by government shelling. Activist Ibn Al-Kalmoun, reached by Skype from Beirut, said phone lines had been cut and many residents had fled.

In Homs, a city in western Syria at the heart of the 11-month-old uprising, the pro-opposition neighbourhood of Baba Amro was struck at dawn by the heaviest shelling in five days, the Syria Observatory for Human Rights said.

Activist Hussein Nader said it was not possible to go to the streets to survey the damage or look for casualties.

“They are hitting the same spots several consecutive times, making venturing out there impossible. The shelling was heavy in the morning and now it is one rocket every 15 minutes or so,” Hussein said by satellite phone.

“Residents are trapped. We have a man who sustained severe burns and is dying and he needs a hospital.”

The man was in a truck picking up wounded people in Baba Amro overnight when it was hit by rocket fire, he said.

Mohammad al-Mohammad, a doctor at a makeshift hospital in Baba Amro, appeared in a video with a wounded youth he said was shot by sniper in his side.

Food and fuel prices had tripled and gangs were looting houses, activists said.

Mohammad al-Homsi said the situation was getting worse.

“Army roadblocks are increasing around opposition districts. There is a pattern to the bombardment now. It is heavy in the morning, then gives way to an afternoon lull and resumes at night,” Homsi said from the city.

“Shells are falling at random, almost everyone in a residential building in Baba Amro has moved to the ground floor. It is normal to find up to six families living together on the lower levels,” activist Hussein Nader said by phone from Homs.

Shelling was also reported in the town of Rastan early on Tuesday.

Foreign media have had to rely on activists’ accounts of the situation because the Syrian government restricts access, although reports from neutral organisations such as the International Committee of the Red Cross and Human Rights Watch confirm the general picture of widespread violence.

Put to a vote
At the UN, diplomats said a draft General Assembly resolution which supported an Arab League plan and called for the appointment of a joint UN-Arab League envoy on Syria could be put to a vote on Wednesday or Thursday.

The resolution, seen by Reuters, is similar to a Security Council draft vetoed by Russia and China on February 4 that condemned the Assad government and called on him to step aside.

There are no vetoes in General Assembly votes and its decisions are not legally binding.

“The situation on the ground is unbearable,” the Qatari president of the General Assembly, Nassir Abdulaziz al-Nasser, told al Jazeera Television. “There is an idea for an Arab draft resolution, which I think will be distributed to the member countries today or tomorrow and will be voted on this week.”

At the weekend, the Arab League proposed a joint Arab-UN peacekeeping mission be sent to Syria and pledged strong political and material support for the opposition.

That plan received a cautious response from Western powers, who are wary of becoming bogged down militarily in Syria, and was rejected out of hand by the Assad government.

Cold War
US Secretary of State Hillary Clinton said in Washington that the peacekeeper proposal would be tough to get through, given Russian and Chinese support for Damascus.

“There are a lot of challenges to be discussed … and certainly the peacekeeping request is one that will take agreement and consensus,” Clinton said.

The Syria conflict, the most prolonged of the revolts in the Arab world which saw the leaders of Tunisia, Egypt and Libya toppled last year, is shaping up to be a geopolitical struggle reminiscent of the Cold War.

Assad can count on the support of Russia, which wants to retain its foothold in the region and counter US influence. He is also closely allied to Iran, which is at odds with the US, Europe and Israel.

The Arab drive against Assad is led by Sunni-ruled Gulf states, who also see Shi’ite Iran and its shadowy nuclear programme as a threat.

Analysts say the conflict could spread across the Middle East if it is not resolved. — Reuters