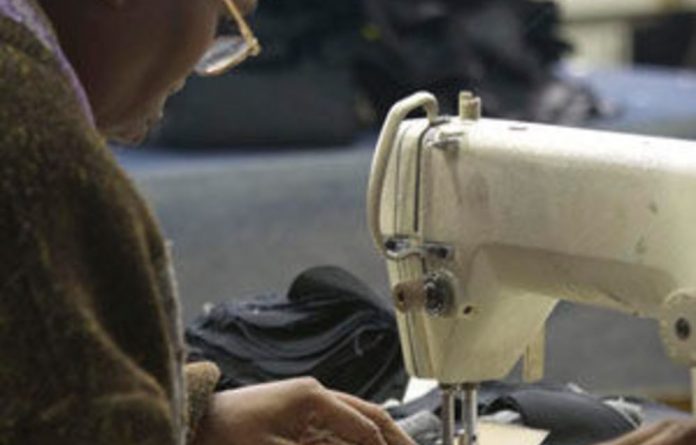 The clothing manufacturing industry is on a knife edge after the announcement of planned retrenchments of about 1 900 workers by two big players, Seardel and Trubok.

Smaller clothing companies that are noncompliant with bargaining council wage rates say if any writs are executed to enforce the rates on them, they will close permanently, resulting in even more job losses. The bargaining council is threatening to resume execution of writs “within the next 10 days”.

Hopes that the South African clothing industry was stabilising receded with the news of the retrenchments.

Seardel and Trubok are compliant with bargaining council wage rates and so are many smaller clothing companies, but about 36% of the clothing industry has refused to be compliant, saying that the wage rates are unsustainably high given international competition.

A moratorium offer made in late 2010 required noncompliant companies to phase in the higher bargaining council wage rates to become compliant — 70% by April last year, 90% by this January and 100% by the end of April.

Ahmed Paruk, head of the United Clothing and Textile Association, which represents many noncompliant companies, said his members had resolved that if the 90% was enforced, they would close permanently, leading to many more job losses. “We are still managing to break even on the current levels of about 70%, but we know we cannot pay more.”

Johann Baard, executive director of the Apparel Manufacturers of South Africa, which represents compliant companies in the bargaining council, including Seardel and Trubok, said writs that had already been issued would be executed on 500 non-compliant factories. Alternatively, he said, the factories could close voluntarily. The 500 factories employ an estimated 20 000 people.

Compliant manufacturers
But Paruk said that no writs had been executed in the past few months. He believed this might be because compliant manufacturers and the dominant union in the sector, the South African Clothing and Textile Workers’ Union, did not want to be blamed for triggering more job losses at this stage.

“They should be embarrassed. Our members are managing to stay afloat while bigger, compliant companies are having to retrench, even though they get major no-pay-back subsidies from the government that are not available to noncompliant companies. And Seardel is not retrenching in its Lesotho operations, where it can pay lower wages,” said Paruk.

But Baard said: “There has been no decision … for any relaxation on compliance enforcement … The delays in execution of writs was due to the passing away of the sheriff responsible for the Newcastle area and related capacity problems. These have now been attended to and writs will again be executed within the next 10 days.”

Trubok is doing a similar rationalisation exercise that will involve the loss of about 400 jobs. The company’s managing director, Doreen Vilakazi, confirmed that it was planning to consolidate its two clothing factories — in Newcastle and Charlestown — into one. Trubok is a subsidiary of black-owned investment group Palama and is understood to have received large amounts of state assistance through the Industrial Development Corporation.

Stuart Queen, chief executive of Seardel, which is also a major supplier to South African retailers, said his company’s apparel division had not been profitable for the past five years and the proposed restructuring would result in “us saving as much of the business as we can”.

The basic problem was price pressure on input costs that could not be recovered in higher prices to clients, he said. “We have had to look at our current range and rationalise it to eliminate low-margin products.”

Financial statements
He said the restructuring had to be done, even though the company had benefited from large state incentives. According to its financial statements, incentives paid to the Seardel group have risen from R14.9-million in the year to end-March in 2010 to R37.7-million last year and R46-million so far in the year to end-March 2012.

Queen said this year’s incentives were almost entirely apparel-production incentives given for ­projects to improve productivity and gave management “some hope that our apparel division can be made profitable in future”.

News of the job losses follows an upbeat forecast of the industry last year by the South African Clothing and Textile Workers’ Union. In November, in the Mail & Guardian, the union’s researcher, Etienne Vlok said statistics indicated that a reversal might be happening of the continuous ­bloodletting in the industry, which had resulted in employment dropping from 120 000 in 2002 to 52 400, according to figures from Statistics South Africa.

“The strategy seeks three key outcomes: to make price less significant by exploiting the locational advantage of manufacturers to local retailers, in other words, delivering orders to customers more quickly, to move the bulk of production to higher value-added products that do not compete with the mass of cheap imports and to respect workers’ rights and that they need to earn a decent wage,” Vlok said.

In mid-November a union press statement said: “Based on information from the union’s job-loss database, the industry experienced a drop of more than 50% in jobs lost in the first nine months of 2011, compared to the same period in 2010. Compared to 2009, the picture was even rosier with 64% fewer jobs lost.”

Following news of the Seardel and Trubok retrenchments, Andre Kriel, the union’s general secretary, said: “We and many other industry players remain upbeat. We never expected job losses to cease immediately. We are, however, deeply disappointed in the proposed job loss announcements at Seardel and Trubok and will resist it vehemently.”

Positive initiatives
In its interim results for the half-year to end-September 2011, Seardel recognised that there were a number of positive initiatives in the industry. These included the advent of production incentives and a new wage dispensation allowed by the union that provides for lower wages for new entrants into the industry.

But Paruk said that, despite these initiatives, large job losses would continue if the union and the bargaining council forced his members to give up on producing lower-margin clothing.

He said compliant companies that were members of the bargaining council “had, through the years, repeatedly agreed to high wage increases, which have now brought the industry to a level of unsustainability against imports”.

Paruk said the noncompliant companies believed that a lower basic wage rate, combined with good production incentives, would be sustainable for the industry.

“Our members still pay above the rates for many agricultural, domestic and service-sector workers and the unions are not trying to close down those sectors. So this is really all just about protecting existing union members’ unsustainable wage rates.”

Baard agreed that wage levels in industry were unsustainable and South Africa had outpriced itself, except in higher-margin niches.

“Apparel Manufacturers of South Africa remains adamant that we need more radical reform in respect of the bargaining council’s main agreement, not only in respect of its wage regulatory provisions, but also in areas such as the flexibility of operational decision-making at plant level and, most importantly, for wage increases to be linked to measurable employee performance at plant level.”

Dilemmas of the two-piece

Sold in the US: Cracking the American market

SA cottons on to fast fashion