Filming the fabric of society 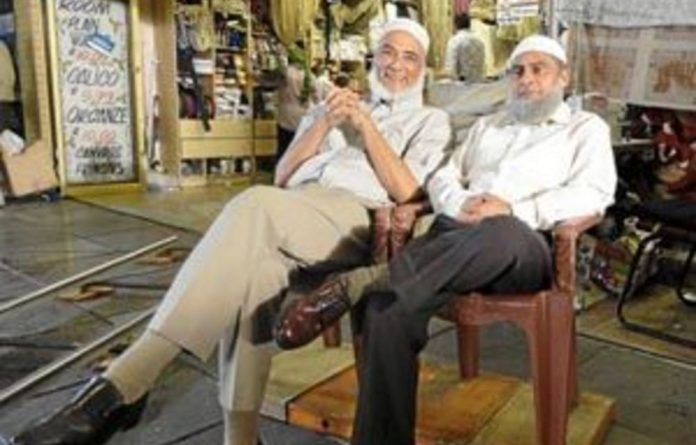 Muslim society can be intensely private, insular and suspicious of outsiders. But Material gets past that insularity, focusing on the challenges facing a family from Fordsburg in Johannesburg.

Director Craig Freimond found it difficult at first to penetrate the close-knit community in which the film is set. ‘One of the reasons that the film took so long to bring to the screen is because I was waiting for the script to come to me,” says Freimond, the renowned director of the cult films Gums ‘n Noses and Jozi.

Muslim stand-up comedian Riaad Moosa stars as Cassim Kaif, who is expected by his domineering and ­traditionalist father (Vincent Ebrahim) to take over the family’s fabric shop.

But Cassim just wants to make the world laugh in pubs and clubs as a stand-up comedian. Of course, that does not go down well with dad. And so ensues a clash of wills with far-reaching consequences.

Add to that two brothers who have not spoken in 30 years, a sweet love story and great performances, including those by supporting actors such as Denise Newman and comics Nik Rabinowitz and Joey Rasdien.

The result is a family comedy-drama that ticks all the boxes and avoids the slapstick easy-gag formula, opting instead for character-based comedy. This is not something South African film has often managed to do with such flair and grace.

Internet entrepreneur-turned-film producer Ronnie Apteker brought the idea of the film to Freimond in 2003 after meeting Moosa.

‘He felt that Riaad had something special and that he was straddling two different worlds, which was a complex situation,” Freimond says. ‘It was born out of the idea of this Muslim comedian, a devout guy, whose family and community are not always supportive of him.”

Although the film is not autobiographical, Moosa could relate to the difficulties of being a Muslim comedian. As a qualified doctor he has experienced the conflict between personal ambitions and what his community expects from him.

‘It’s a positive story, an innovative, layered and textured work. When people laugh and cry, barriers are lifted,” says Moosa, whose performance is flawless, although he found ‘film so much more technical and in your face than stand-up [comedy]”.

A key figure in the success of the film is Durban-born actor Ebrahim, famed for his role in The Kumars at No 42. He has lived and worked in Britain for about 30 years.
Freimond credits him with bringing the necessary gravitas to the film, describing him as an ‘extraordinary man with very little ego and intense professionalism”.

Ebrahim’s involvement is certainly a coup for the film; his complex ­performance is a tour de force.

Not being Muslim or Indian, ­Freimond felt he had to make a ­special effort to ensure authenticity.

‘We were very aware that if we didn’t get it right, we could be embarrassed — dead in the water,” he says.

Fordsburg, another character in the film, is lavishly filmed with a ­reverent camera, casting it in an almost mystical light.

‘I’ve tried in all my films to ­represent different aspects of Johannesburg, a city struggling for its own ­recognition,” says the director.

‘I’ve always been drawn to and had a relationship with Fordsburg. I ate a lot in its restaurants, admired its architecture and loved walking through the Friday-night markets.
There’s so much going on there. It has this mythical rapture.”

Even though Moosa is from Cape Town, he introduced Freimond to Johannesburg insiders who eventually helped the director to gain access to the kinds of characters that informed the story. The tale of the two feuding brothers was taken from a real story told to Freimond.

Material also touches on the effects of apartheid on the Indian community.

‘History affected this community tremendously,” says Freimond. ‘Although many were forced to move from where they were, it hasn’t received the same amount of ­attention as Sophiatown.”

The film acknowledges such apartheid crimes but not in a heavy-handed way. ‘It’s not a political film,” says Freimond. ‘We wanted to make something that Indian and Muslim people could watch but that everybody could enjoy. Finding the right tone was difficult.”

The themes of father and son, ­coming of age, the idea of loss, letting go of the past and finding love are ­certainly universal.

Riaad Moosa on the Material world

On the idea
Ronnie Apteker, the executive producer, has a love for stand-up comedy and movies. He met me on the comedy stage at Cool Runnings when I was still doing medicine. He said: ‘Riaad, that’s an interesting story — Muslim doctor and comedian. We should develop a script. Let’s do it.” I thought: ‘I have ward runs in the mornings, I can’t think of these things.” But I approached it as I do most things in my life: if I’m not morally opposed to something, I just go with it and see where the universe takes me.

On the story
The actual story has nothing to do with my life specifically, because I trained as a doctor, I’m from Cape Town and my parents are generally very supportive — while, at the same time, urging me to do things within the boundaries of my culture and religion. [The character Cassim] is from Fordsburg, Johannesburg, works in a material shop. My frame of reference is not the same, but trying to negotiate doing stand-up and at the same time having to be an integral part of the community, those issues I deal with on a daily basis also.

On co-star Vincent Ebrahim
From the get-go it was very much a family feel [on set], and everybody was very gracious. We were all hanging out together and it was really nice. There are conflicts between my character and Vincent’s character, but there’s also a lot of love and tenderness between the two characters.

On preparation
Because I was part of the writing process it happened subconsciously. Most of my preparation came in trying to normalise the accent, because there are slight differences between the Cape Town and the Johannesburg accents. The dramatic scenes were challenging because acting for camera is different to stand-up, which is exaggerated, whereas the camera is right here in your face and the camera sees everything.

On stand-up
I wrote the stand-up in conjunction with [director] Craig Freimond, but there are bits and pieces of stand-up that I usually do and we interweave it into the narrative to show how certain things that you experience in real life get translated on to the stage. There was a lot of improvisation. We improvised while writing the script, during rehearsals and even on screen, at times.

On fame
It can be quite difficult when I’m busy with my kids and my kid is covered in syrup and I’m trying to wash their hands and face at the water fountain in Zoo Lake and people go: ‘Hey, it’s Riaad, let’s take a photo!” and I’m like: ‘I’m on battle stations now — maybe just give me a few minutes to relax —” So that’s challenging.

On humour
I’ve always wanted to make it accessible to all people and all different tastes in humour. So, in the film, you’ll find we have humour ranging from slapstick to witty dialogue to silly dialogue to comedic situations to cultural humour to stand-up. There are little bits of everything. We tried to put little bits of all the various aspects of people and of the different styles of humour that people like in the movie.